KAMPALA – The Uganda Media Council (UCU) a body charged with the regulation of Mass Media and journalism as a profession has released a series of sweeping guidelines that for the next 32 days will temporarily rewrite the norms of media practitioners over coronavirus.

In a statement signed by Mr. Paul Ekochu, the chairman Media Council of Uganda said all national and local governments, departments and agencies as well as private sector organizations have been directed to suspend all live coverage of press conferences to avoid congregation of large numbers of persons in one location.

Mr. Ekochu in guidelines sent to all media houses requested all directed them to engage with government at all levels to facilitate the provision of live feeds and public announcements, especially at the community level.

The live feeds he said should be enabled to receive questions and answers from and to the public.

“As such this kind of facilitation will minimize the need for crowded engagement and risk of infections therefrom,” he said.

Among other recommendations in the next 32 days, all media houses are obliged to provide their personnel with protective gear including face masks, gloves, and sanitizer liquid as they cover the pandemic.

On unsubstantiated and outright false information about the coronavirus that has been ripping across social media platforms, media houses have been asked to only receive official content about the pandemic from authorized officers of the ministry of health.

Mr. Ekochu said the measure employed by the council will help in countering misinformation.

Other changes, the media council has asked media Media houses should designate personnel covering the pandemic and provide the government trough media council, a list of the designated person who forthwith shall be allowed to access to government authorized information centers. 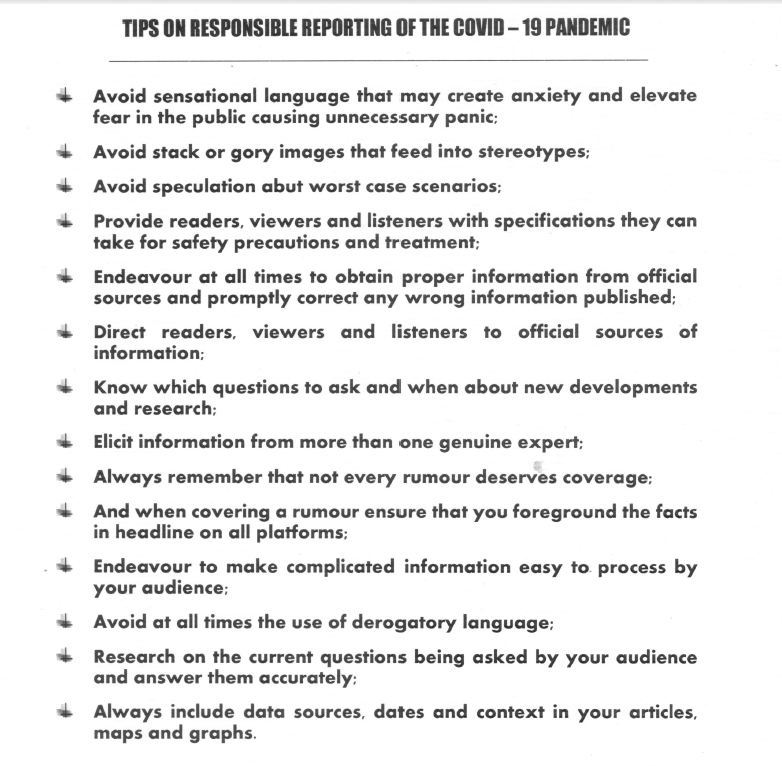