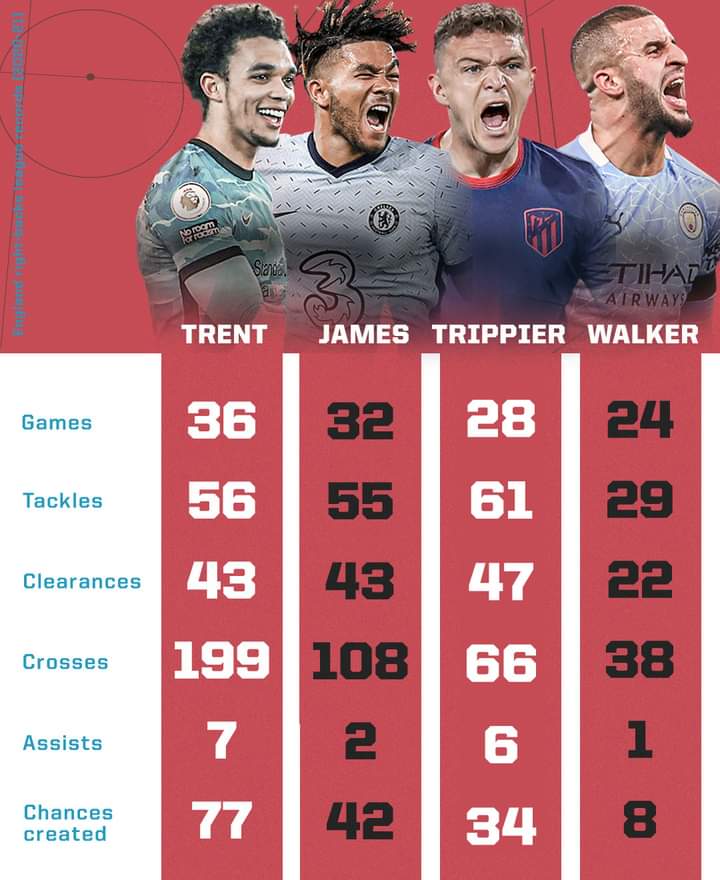 At first glance, England boss Gareth Southgate’s decision to take four right backs to the Euro 2020 tournament comes across as weird, unambitious and a tad cowardly. Scratch beneath the surface and you realise neither of Kieran Trippier, Trent Alexander Arnold, Reece James or Kyle Walker deserved the chop. Brief tournaments like the Euros require players who’ve thrived in pressure cooker atmospheres like the Champions League. All four carry bags of such experience as James and Trent have both lifted Big Ears. Trippier and Walker have just been crowned champions of Europe’s two highest rated leagues.

Southgate has cited the flexibility of the players as one of the principal reasons for their selection. This is what he meant. Kyle Walker has been there done that, having played as part of the back three for the Three Lions in their march to the Russia 2018 World Cup semis. Walker’s no holds barred display in shackling the twin threat of European club football’s most lethal striking pair, Neymar and Kylian Mbappe, in the Champions League semifinals is the kind of display that the coach cannot afford to miss. Reece James showed similar mettle in confronting Real Madrid’s Eden Hazard and Manchester City’s Raheem Sterling on his way to a European club football’s Holy Grail.

James has proved also proved to be adept at playing on the right side of a back three, as he showed in snuffing out Jamie Vardy’s pace threat during the FA Cup final. Trippier and Alexander Arnold are blessed with the added advantage of being dead ball experts. Media reports suggested Liverpool’s Arnold is the one who survived the chop but for me his inclusion should have been a no-brainer. This is because of all four, he is the most gifted all round footballer. A midfielder growing up, his game IQ is way up there with those of the world’s most creative specimens.

Football ignoramuses ought to know that the leading factors that can help a team like England end their Euro blank include superior collective football Intelligence, experience in pressure cooker games and team unity. In Arnold, Southgate has on his books a player of limitless creative ability, as indicated in his chances created and assists columns for Liverpool over the last two seasons. The lethargy that briefly bedevilled him during the regular season was an offshoot of general malaise afflicting Liverpool.

Against top sides, Southgate has the option of starting Harry Maguire, John Stones and Kyle Walker as a back three, with Ben Chillwell and Trent Alexander Arnold as wing backs. The two central midfield positions would then be occupied by Declan Rice, who has skippered West Ham into Europe, and Jude Bellingham, whose performances in Borussia Dortmund’s late flourish have all been top drawer.

Such a back six would represent the peak of collective football Intelligence, experience, pace and creativity. Mason Mount, whose displays for Chelsea in their Champions League success, and Jack Grealish, who is blessed with a genuine X Factor would me the best choices to support captain and top scorer Harry Kane. Jadon Sancho and Raheem Sterling ought to be content coming on as subs.