KASSANDA — Budding rally driver  Rajiv Ruparelia has on Sunday,  June 6 spoken after he emerged third in the UMC Kasanda Rally 2021.

Rajiv, driving under his RR Double Trouble tag had shown intent on his 4th event with an impressive performance in anclosed event.

He said his performance was due to the well organization of the event after both boda bodas and spectators were locked out.

“Spectatore were controlled and saftey was taken Under control.This is a big celebration not only for my self But for us as a Federation and Clubs and it has set Standards,” the businessman said after trouncing seniors of the game including Charlie Lubega.

At least 23 drivers participated in the rally.

“It’s my first year in rallying a full Rally and this is my 4th event and am Learning alot including the recent Rally when I hit a Dog and I also learnt alot in Kenya,” he said, noting that: “The trick today is that I actually drove only 60 percent of what I normally drive, I tuned all down and cooled off the speed kept my feet abit off the accelarator and I stayed away from everybody before the Rally because I think alot of the time people pile alot of more pressure than they need to which doesn’t help to the success of the team”.

“God is great I have obtained these Results today, we are a Podium finish so in my first season of NRC I have managed to get a podium”.

He also requested fans not to put pressure on drivers when things are not going well because it just makes things worse.

The businessman also petitioned the organizers to ensure that the Pearl of Africa Rally is done on cross roads saying he has talked to many Kenyan Drivers who have experienced willingness to join in. 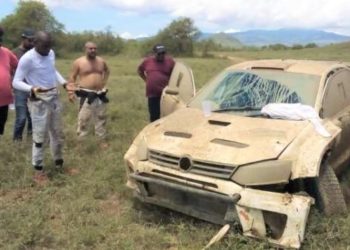