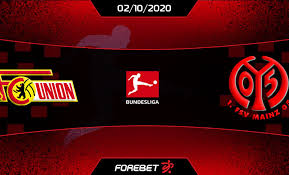 Two sides still without a win in the new Bundesliga season will lock horns on Friday evening as Union Berlin welcome Mainz O5 to the Stadion An der Alten Forsterei.

The hosts played out a 1-1 draw with Borussia Monchengladbach in gameweek two, while Mainz fell to defeat to newly-promoted Stuttgart last Saturday.

After suffering an opening-day defeat to Augsburg, travelling to a Monchengladbach side looking to avenge a loss of their own to Borussia Dortmund would not have filled the Union Berlin faithful with confidence in gameweek two.

However, Urs Fisher’s men gave a good account of themselves and managed to come away from the Borussia-Park with a point to show for their efforts – with Marcus Thuram’s opener for Monchengladbach cancelled out by Nico Schlotterbeck’s looping header 10 minutes from time.

Fischer would have certainly taken the positives from that result as Union bid to claim their first three points of the 2020-21 season on Friday, and the visit of Mainz is followed up by a trip to another struggling side in the form of Schalke after the international break.

Furthermore, whilst Union’s season began in disappointing fashion with that home defeat to Augsburg, Die Eisernen have only lost four league games on familiar territory since November – a run which also includes seven wins and three draws in front of their own fans.

In contrast, Mainz are a club in disarray. Only Koln and Schalke have also suffered defeat in their opening two matches, and the Nullfunfer have been blighted by off-the-field issues early on in the new campaign.

After suffering an opening-day loss to RB Leipzig, Mainz players took the decision to boycott training a few days before their meeting with Stuttgart – with reports claiming that the squad chose to go on strike after Adam Szalai was forced to train away from the rest of the team.

Stuttgart picked up their first victory of the season with ease against Mainz following that week of turmoil – a culmination of events that eventually led to manager Beierlorzer being relieved of his duties.

Nullfunfer supporters will certainly not be all that optimistic about their side’s chances of getting their first points on the board in the wake of those events, and Mainz must also navigate challenging fixtures against Bayer Leverkusen and Monchengladbach after the international break.

Jan Moritz Lichte will be the man tasked with leading Mainz to their first victory of the new campaign, although Die Nullfunfer failed to beat Union in the two meetings between the sides last season.

Aside from Anthony Ujah and Christian Gentner – both of whom are due back next month – Union have no other injury concerns heading into gameweek three.
Fischer opted for a three-at-the-back system against Monchengladbach to accommodate the loss of Gentner, and while the Union boss will fancy his side’s chances of coming out on top here, Fischer will most likely stick with the same formation.

Goalkeeper Loris Karius has just joined the Bundesliga outfit on loan from Liverpool, but Andrea Luthe is expected to keep his place in between the sticks for the visit of Mainz.

As for the visitors, Moussa Niakhate was given his marching orders against Stuttgart and will play no part here, meaning that Alexander Hack should fill the void in the heart of defence.

Stefan Bell, Pierre Kunde and Esimilson Fernandes are all yet to feature since testing positive for coronavirus, and the trio are set to remain sidelined alongside Ji Dong-Won, who is nursing a knee injury.