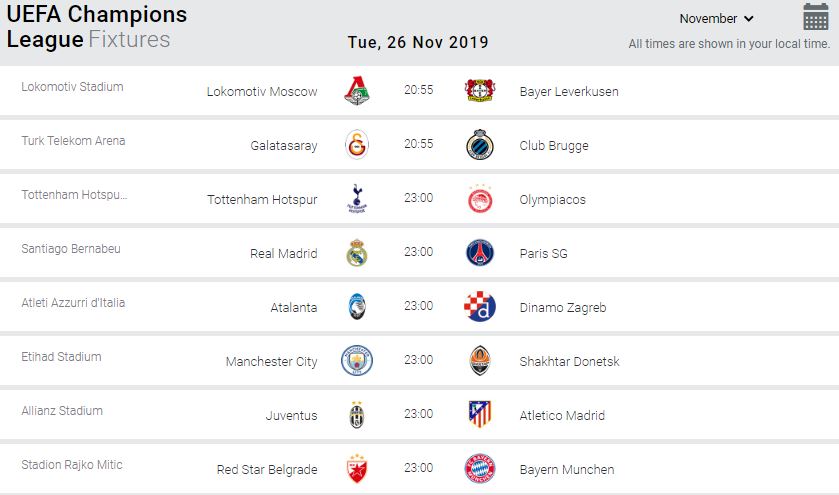 Galatasaray have endured an awful Champions League campaign, only picking up a single point and failing to score a goal. This was compounded by a 6-0 drubbing against Real Madrid three weeks ago, which eliminated them from the competition. The side have managed just six shots on target in their four games so far this season, looking second best against every team they’ve come up against.

Injuries haven’t helped them, with main striker Radamel Falcao missing part of the campaign, but the fans are still bitterly disappointed with the state of their European challenge and there are increasing calls for head coach Fatih Terim to be relieved of his duties. For now, though, he remains in charge and leads his side into what looks to be the game that decides which of these two teams will finish third and qualify for the Europa League.

Club Brugge haven’t fared much better in a tough group but a creditable 2-2 draw against Real Madrid at the Santiago Bernabau has at least given them some cause for celebration. They’ve averaged two shots on target per game, not much of an improvement on Galatasaray, but hold a small advantage over their opponents coming into the encounter.

A draw would suit Club Brugge in this game, as it would mean Galatasaray have to claim a victory at Parc de Princes to finish third in the group; they could well look to keep things tight knowing Galatasaray have struggled in front of goal this season.

Both sides can still technically qualify for the Champions League knockout stages but it looks very unlikely. There is still plenty on the line here, though, with the winner being the most likely team to qualify for the last 32 of the Europa League. Lokomotiv Moscow currently hold the advantage, with a single goal scored being the difference between the two sides at this point.

Lokomotiv Moscow’s opening-day win over Bayer Leverkusen in the reverse fixture is what separates the two sides at the moment. But since then the Russians haven’t enjoyed a successful campaign, with two losses against Juventus and a 2-0 defeat at home to Atletico. They’ve averaged four shots on target in that time but only scored twice in what has been a disappointing run.

The fortunes of Bayer Leverkusen have been the opposite of their opponents this week, with three defeats in a row being ended with victory over Atletico last time out, keeping them in contention for qualification. Their conversion rate has been fairly average, scoring one in every three shots on target, but they’ll need to be a little more clinical in the final third to find the win in a tough game in the Russian capital.

With a lot being on the line here, we can see this game being quite open, especially with each team knowing the other could pick up a result in the final group game.

Gareth Bale helped Real Madrid to victory over Real Sociedad from the bench on Saturday but his arrival to the pitch was met by boos and whistles. The Wales international will hope to start such an important game like this one but it remains to be seen whether that will be the case. Toni Kroos will return to the side after dropping to the bench at the weekend. Lucas Vazquez and James Rodriguez both remain sidelined for Zinedine Zidane’s side, while Nacho is a doubt.

Paris Saint-Germain have both Neymar and Kylian Mbappe available and they are expected to start their first game together this season. Thomas Tuchel therefore has the difficult decision of leaving one of Angel Di Maria or Mauro Icardi out on Tuesday night. Marco Verratti has made the travelling squad for Tuesday’s game after missing out at the weekend through injury, but Ander Herrera, Layvin Kurzawa, Eric Maxim Choupo-Moting and Thilo Kehrer remain sidelined. Di Maria and Verratti will miss PSG’s final group game if they are booked against Madrid.

Real come into this game in good form having won five and drawn one of their last five matches as they look to secure second in Group A. They were comprehensively beaten 3-0 in Paris on matchday one so Zinedine Zidane’s men will be desperate to avenge that disappointing loss.

PSG have already qualified for the knockout phase but a point will see them confirm top spot in Group A ahead of Real with a game remaining.

Harry Kane, Jan Vertonghen and Tanguy Ndombele all trained ahead of Tottenham’s Champions League clash with Olympiakos. Kane looked to have taken a knock during Saturday’s win at West Ham, while Vertonghen has had a hamstring injury and Ndombele a groin problem. Meanwhile, Ben Davies was absent after sustaining an injury against the Hammers, with Erik Lamela and Hugo Lloris also out.

Head coach Pedro Martins has usually elected to set Olympiacos up a little more conservatively in continental competition, looking to counter teams on the break. That is unlikely to change on Tuesday, with Andreas Bouchalakis accompanying Mady Camara and the more creative Valbuena in midfield.

Njegos Petrovic will miss FK Crvena Zvezda’s last group game if he is booked against Bayern on Tuesday. Milan Pavkov and Branko Jovicic are both sidelined for the home side for their penultimate Champions League group game. With Pavkov unavailable for FK Crvena Zvezda, Tomane is free to start upfront.

Bayern Munich are still without Lucas Hernandez, Jann-Fiete Arp and Niklas Sule. Jerome Boateng is available again after serving a suspension at the weekend but is not fancied at Bayern and may not start here. Javi Martinez, David Alaba and Benjamin Pavard are all likely to be considered ahead of Boateng to start at centre-back. Ivan Perisic, Kingsley Coman and Leon Goretzka are pushing for starts on Tuesday night.

Two heavy defeats to Tottenham have all but ended Crvena zvezda’s chances of finishing in the top two, and realistically their focus will be on securing third place and Europa League qualification.

Bayern Munich have already booked their place in the last 16 having collected maximum points and they have won all three of their games under interim coach Hansi Flick.

Manchester City record goalscorer Sergio Aguero will miss Tuesday’s Champions League clash with Shakhtar Donetsk at the Etihad Stadium with a thigh injury. The Argentina striker limped out of Saturday’s victory over Chelsea and joins left-back Oleksandr Zinchenko, Aymeric Laporte and Leroy Sane (all knee) on the sidelines. Spanish midfielders David Silva and Rodri are fit after suffering cramp at the weekend and veteran goalkeeper Scott Carson will be on the bench with Claudio Bravo suspended.

Shakhtar Donetsk make the long trip to Manchester without the services of several key players including Moraes and Manor Solomon, while Yevhen Konoplyanka is a major doubt. They will likely have to bring in some fringe players to cover for their absences, with Andriy Boryachuk expected to start upfront and Tete due to come in on the right-wing ahead of Dentinho.

Dinamo Zagreb have a real chance of reaching the Champions League knockout stage for the first time ever – and anything they can get away to Atalanta would surely boost their cause.

The Croatian champions have invariably been makeweights in the group phase of Europe’s elite club competition, frequently suffering embarrassing defeats, but this season it is different as they have improved after getting to the round-of-16 in last term’s Europa League.

Nenad Bjelica’s side are level on points with Shakhtar Donetsk in Group C, five behind leaders Manchester City and four ahead of Atalanta. With Shakhtar visiting the Etihad Stadium this week, there is a great opportunity for Dinamo to edge ahead of them going into the final round of matches.

Also, Dinamo have already won 4-0 against Atalanta, which will give them confidence of enhancing their qualification prospects in San Siro, Milan where the Bergamo-based club are playing their Champions League home games.

However, despite losing when they hosted Shakhtar, Atalanta held Manchester City to a 1-1 draw at the Giuseppe Meazza to collect their first ever Champions League point, so they are no pushovers despite having struggled to adapt to competing at this level.

The matches between these clubs in 1990 were in the UEFA Cup first round, with Atalanta going on to lose their quarter-final against Inter Milan Dinamo Zagreb have not won any of their last 17 away matches in the Champions League group stage…and Dinamo lost 11 of the latest 14 of those games to nil

Juventus manager Maurizio Sarri gave Cristiano Ronaldo the weekend off to keep his fresh for Tuesday’s encounter with Atletico Madrid. Federico Bernardeschi was forced off midway through the first half of Saturday’s 3-1 win over Atalanta and won’t play here. Sarri will hope to have Alex Sandro fit after the Brazilian missed out against Atalanta through injury, while Juan Cuadrado is back from a ban in Europe. Aaron Ramsey or Rodrigo Bentancur will replace Bernardeschi in the starting XI on Tuesday, while Paulo Dybala and Gonzalo Higuain compete for one place upfront. Blaise Matuidi was an unused substitute on Saturday and will return in midfield here. He will miss Juventus’ last group game if he is booked against Atletico.

Thomas Partey and Saul Niguez will return to the side after missing Saturday’s 1-1 draw with Granada through suspension. Felipe and Mario Hermoso will continue at centre-back as Jose Gimenez has failed to recover from injury in time. Joao Felix made his return from injury at the weekend after a six-game absence and will push to start against Juventus. Kieran Trippier was at fault for the goal Atletico conceded against Granada at the weekend and could be replaced at right-back by Santiago Arias here.

Juventus have won their last five matches in a row in all competitions but a point against Atletico here will seal top spot in Group D.

Atletico have not yet qualified for the knockout phase and they face a hard test in Turin against Group D leaders Juventus on matchday five.