Liverpool continues to show that they are out-right favourites to win the 2019/20 Premier League title. This past weekend, the Kops maintained their 8 point lead at the top of the standings and 9 away from two-time defending champions Man City. This is after Jurgen Klopp’s side beat Crystal Palace 2-1 away from home on Saturday afternoon thanks to goals by Sadio Mane and Roberto Firmino. Liverpool now has 37 points from 13 games.

For the defending champions, they came from a goal down to get past Chelsea on the same day. Ngolo Kante put the visitors ahead before Kevin De Bruyne and Riyad Mahrez struck before halftime to turn the game on its head. City sits third on the log with 28 points.

Second place is currently occupied by Leicester who defeated Brighton 2-0 thanks to strikes by Jammie Vardy and Ayoze Perez.

Still on Saturday, Tottenham overcame West Ham United 3-2 at the London Stadium. Spurs who were playing their first game under Jose Mourinho saw Son Hueng Min, Lucas Moura and Harry Kane strike to hand them a three-goal caution but Michael Antonio and Angelo Ogbonna scored late for West Ham to ensure it is a respectable loss for the hammers. The result sees Spurs climb into 10th spot with just 17 points accumulated so far.

After Spurs beat West Ham, their rivals Arsenal were held to a 2-2 draw at home to Southampton. Alex Lacazatte scored twice including one in stoppage time for Arsenal while Danny Ings and James Ward Prowse scored for the Saints. Arsenal who have now gone five games minus victory are 8th with 18 points.

On Sunday, Man United conceded a late Oliver Mcburnie goal as they drew 3-3 at Sheffield United. Earlier, Sheffield had taken a two-goal lead through John Fleck and Iyv Mousset before Brandon Williams, Mason Greenwood and Marcus Rashford had scored to turn the game upside-down. The draw leaves United 9th with 17 points.

The game between Aston Villa and Newcastle United will be played on Monday night.

Was impressive in the 2-0 victory over Brighton on Saturday, making three clearances, four interceptions and creating two chances.

Set up Sadio Mane for Liverpool’s opener in the 2-1 win over Crystal Palace on Saturday.

Arguably Man City’s most important player and Fernandinho was at it again as he pocketed Tammy Abraham in the 2-1 win over Chelsea.

Scored one of Burnley’s three goals against Watford on Saturday.

Scored one and had a hand in what proved to be the winner in the victory over Bournemouth.

Opened the scoring as Sheffield drew 3-3 with Man United on Sunday.

Scored once and created three chances as Southampton drew 2-2 away to Arsenal on Saturday.

Scored once and assisted Ayoze Perez in the 2-0 win over Brighton.

Scored one and assisted another in the 3-2 victory over West Ham United on Saturday afternoon. 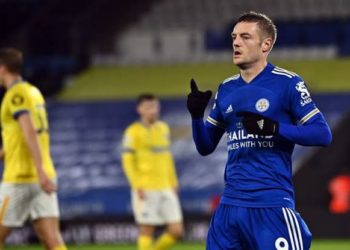