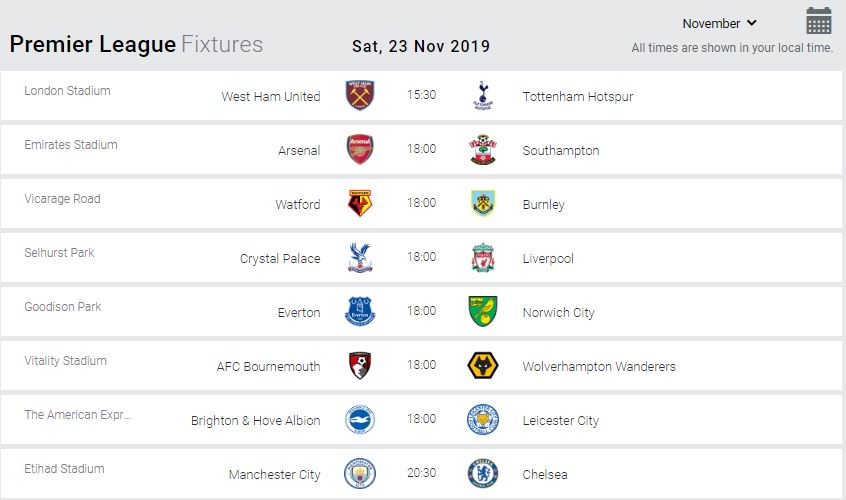 Jose Mourinho will start his tenure as Tottenham boss when they take on West Ham away from home on Saturday afternoon.

West Ham trio Mark Noble, Jack Wilshire and Michail Antonio all trained this week and are available after injuries. However, Manuel Lanzini is out with a fractured collarbone and joins Lukasz Fabianski on the sidelines.

West Ham could secure consecutive league wins over Tottenham for the first time since 2013-14. The away side has won five of the last six meetings in all competitions, including both league games last season. West Ham have scored 53 Premier League goals against Spurs, more than versus any other team.

Tottenham are winless in five league matches, their worst spell since a run of six between December 2008 and January 2009. Spurs are without a victory in 12 away league games dating back to January, and have equalled the club Premier League record of 13 away matches without a clean sheet. They begin the weekend in 14th place, their lowest position after 12 matches since March 2009. Tottenham have kept one league clean sheet this season, a joint-low with Norwich. They have conceded at least once in their last seven matches. Spurs have dropped a league-high 12 points from winning positions – just two fewer than in the whole of last season. Son Heung-min has scored five goals in his last five games for Tottenham in all competitions. Jose Mourinho has lost his last two matches versus Manuel Pellegrini, with his sides conceding six goals.

Goal-shy Bournemouth must continue their attempts to improve in attack without Josh King, who sustained a hamstring injury on international duty. In-form winger Ryan Fraser faces a fitness test, while David Brooks remains out with an ankle issue.

Wolves forward Adama Traore will be assessed after withdrawing from the Spain squad with a hamstring problem. Morgan Gibbs-White could return following a back injury that has sidelined him since 24 October.

Bournemouth are unbeaten in all four of their home league games against Wolves (W2, D2). Wolves’ 2-0 home victory last season was a first clean sheet in 13 meetings in all competitions.

Arsenal come into the game winless in their last four Premier League games (D2, L2). They are unbeaten in seven home league games but have won only three of those matches. The Gunners have 17 points from their opening 12 league fixtures, which is seven fewer than this stage of last season. Arsenal have a negative goal difference (-1) after 12 fixtures for the first time since the 1982-83 campaign. They have won 35 of their past 36 home league matches against sides starting the day in the relegation zone. November is statistically their worst month for defeats during the Premier League era, suffering 34 losses. They have 87 points form Unai Emery’s first 50 league games, one fewer than Arsene Wenger’s final 50 matches. Pierre-Emerick Aubameyang has scored eight league goals, as many as the rest of the Arsenal squad combined.

Former captain Granit Xhaka could be recalled after he impressed for Switzerland in midweek. Nicolas Pepe and Sead Kolasinac are among several players being assessed but Dani Ceballos remains out.

Southampton boss Ralph Hasenhuttl can select from a full squad following the return of Ryan Bertrand, Cedric Soares and Pierre-Emile Hojbjerg. Bertrand has served a three-game ban, with Cedric and Hojbjerg are fit after missing out against Everton.

Arsenal are unbeaten in 24 top-flight home meetings since a 1-0 defeat in November 1987 (W18, D6). Southampton have played more Premier League away games against Arsenal without winning than any other side has versus a particular opponent (D5, L15). Ralph Hasenhuttl’s first victory as Southampton manager was 3-2 at home to Arsenal last December.

Brighton are winless in all four Premier League meetings against Leicester City, conceding two goals in each of their three defeats. However, Leicester have won just one of their last six league visits to Brighton (D2, L3).

Brighton winger Leandro Trossard has overcome an ankle injury, while Adam Webster could come into contention after missing the defeat at Manchester United because of a similar problem. Aaron Connolly has failed to recover in time from a groin problem and captain Lewis Dunk serves a one-match ban.

Leicester midfielder James Maddison is fit after missing England’s most recent game because of a calf strain. Jonny Evans is expected to be available despite stomach pain early in the week.

Crystal Palace have no fresh injury concerns for the visit of Liverpool. Wilfried Zaha and Joel Ward have overcome the minor injuries they sustained during the defeat at Chelsea.

Mohamed Salah and Andy Robertson could miss out for Liverpool because of ankle injuries, while Joel Matip has still not recovered from a knee problem. Xherdan Shaqiri is an option after two months out with a calf injury, and Joe Gomez is available despite withdrawing from England duty with a knee issue.

Crystal Palace have lost six of the past seven Premier League meetings, including each of the last four. Liverpool have won five consecutive away games against Crystal Palace in all competitions, having failed to win any of their previous six at Selhurst Park. The Reds have scored 24 Premier League away goals versus Palace, six more than any other team.

Liverpool’s eight-point lead is the second biggest after 12 matches of a Premier League season. Manchester United were nine points clear at the same stage in 1993-94. Liverpool have lost just one of their past 51 league matches, and none in 29. They are two shy of the club’s longest unbeaten top-flight run, set between May 1987 and March 1988. However, the Reds are the only Premier League club without a clean sheet in their past nine games in all competitions. They could fail to keep a clean sheet in 10 consecutive matches for the first time since a run of 11 from April to September 2006 under Rafa Benítez. Liverpool have won six of the last seven Premier League fixtures in which they conceded the opening goal, including a 4-3 home victory against Crystal Palace in January. Sadio Mane has scored seven goals in nine Premier League games against Crystal Palace, including in each of his last four appearances in this fixture.

Everton have lost just one of the past 12 Premier League meetings, winning five and drawing six. Norwich are winless in their last six top-flight trips to Goodison Park (D2, L4). However, the Canaries did win the most recent meeting, a 2-0 League Cup triumph at Goodison Park in September 2016.

Everton pair Bernard and Fabian Delph will have respective knee and hamstring injuries assessed. Forward Moise Kean, who was dropped from the squad against Southampton for arriving late to a team meeting, will be involved.

Norwich’s Josip Drmic could be out for six weeks with a “muscle fibre” injury, while Jamal Lewis is also unavailable. Christoph Zimmermann could feature for the first time since August. Kenny McLean and Teemu Pukki have both recovered from minor injuries sustained on international duty.

Burnley’s Chris Wood is available despite missing New Zealand’s match against Lithuania on an artificial pitch due to his prior hamstring problems. Matej Vydra, Johann Berg Gudmundsson and Danny Drinkwater remain out.

Manchester City come into the contest hainge won five of the past six meetings in all competitions against Cheslsea, keeping five clean sheets in the process. Chelsea have lost three of their last four Premier League away games against City. That run includes last season’s 6-0 reverse in the corresponding fixture – Chelsea’s biggest defeat in the Premier League.

Manchester City goalkeeper Ederson returned to training on Thursday following a muscular problem and will face Chelsea. City will definitely be without Bernardo Silva due to suspension.

Chelsea’s Callum Hudson-Odoi is unlikely to play due to a hamstring problem but Jorginho returns after suspension. Christian Pulisic is back in training following a groin injury and could feature.

City’s three league defeats from their opening 12 matches is as many as Pep Guardiola had at this stage of a season in his previous 10 top-flight managerial campaigns combined (W95, D22, L3). Their three defeats is just one fewer than in the whole of 2018-19, and one more than they did in 2017-18. City are one win shy of 400 in the Premier League. Kevin de Bruyne’s nine Premier League assists this season is five more than any other player. Sergio Aguero has scored 10 Premier League goals against Chelsea, more than any other player in the competition’s history. The Argentine has netted eight goals in his last six games against the Blues, including a hat-trick in the corresponding fixture last season.