LUGOGO – KCCA FC continued their fine run in the Uganda Premier League thanks to a comfortable 5-2 victory over Kyetume FC on Saturday.

The Kasasiros were in inspired form from the on-set, scoring twice in the first and then three times in the second half to walk away with all three points.

Mike Mutyaba, Mustafa Kizza, Sam Ssenyonjo, Muzamir Mutyaba and Allan Okello were all on target for the Kasasiros while Steven Ssande and Denis Lubowa struck for the visitors.

As early as the 22nd minutes, KCCA FC took the lead through Mike Mutyaba who headed in Kizza’s well weighted free kick.

Six minutes later, Mutyaba returned the favour as he set up Kizza for the Kasasiros’ second.

After Mike had gotten his goal, it was the other Mutyaba’s (Muzamir) turn to put his name onto the score-sheet, scoring the fourth for the home side on 65 minutes.

Kyetume were proving a handful in the last quarter of the game and Lubowa made it 4-2 on 80 minutes.

The stage was now set for Okello to put the game to bed as he curled home KCCA’s 5th of the afternoon with three minutes left on the clock.

Both sides had chances to score more on the day but were let down by a combination of poor finishing and good goal keeping.

Kizza had a free kick parried to safety by Joel Mutakubwa before Ssenyonjo headed straight at the shot stopper.

Mike Mutyaba then saw a header cleared off the line by Baker Buyala while Erisa Ssekisambu headed wide from a glorious position.

The former Vipers SC forward then saw an effort kiss the cross bar before going out for just a goal kick.

In the second half, Okello shot straight at Mutakubwa after he was set up by Muzamir Mutyaba before the later was closed down by the Kyetume custodian in a one-on-one situation.

For Kyetume, Benon Tahomera drove a free kick wide and Noel Nasasira failed to convert from an easy tap-in.

Shockingly, there was no card ditched out on the day despite the high intensity of the game.

Following the victory, KCCA FC who have now won five and drawn one of their last seven league games, maintained third spot on the log but now have 26 points from 12 first-round games.

Up next for Mike Mutebi’s side is trip to Mbarara City FC before they take on SC Villa at home and then Proline FC away.

The result sees Kyetume remain 12th with 16 points from 15 games.

The other game played on Saturday 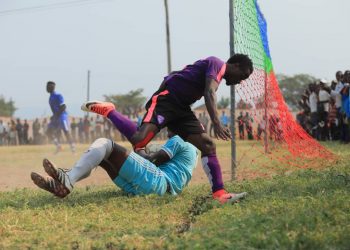