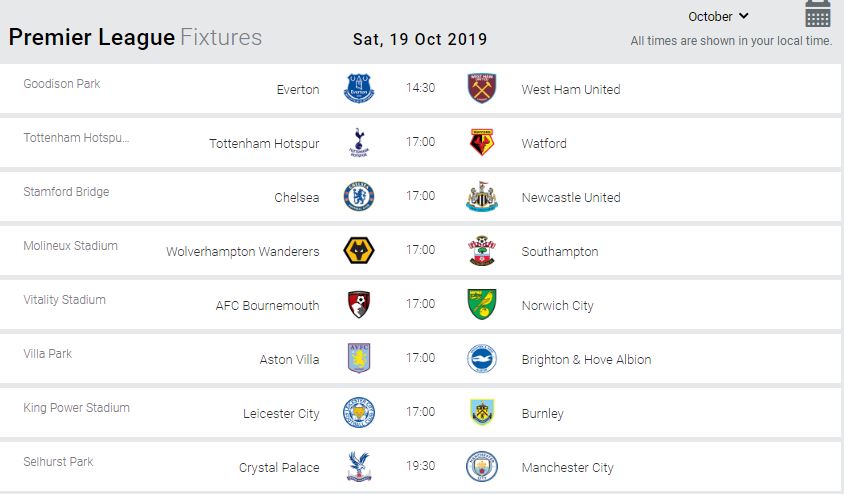 West Ham go into Saturday’s game away to Everton having claimed two victories in the past three league meetings with the Toffees, as many as in their previous 22 attempts (D7, L13). Everton have won 25 games and scored 83 goals against the Hammers – both Premier League club records against a particular opponent. The Hammers have failed to score in four of the past six league encounters.

Everton loanee Djibril Sidibe is set to make his first Premier League start in place of the suspended Seamus Coleman. Fabian Delph remains doubtful due to a hamstring injury, while Jean-Philippe Gbamin and Cenk Tosun are both out.

West Ham’s Declan Rice has overcome the illness that caused him to miss England’s win in Bulgaria. Aaron Cresswell and Robert Snodgrass are also available following knocks but Lukasz Fabianski, Michail Antonio and Winston Reid all remain out.

Adam Smith could be in contention to play for Bournemouth after a seven-week absence because of a hamstring injury. David Brooks, Dan Gosling and Junior Stanislas remain long-term absentees.

Norwich will be strengthened by the return of several players, including goalkeeper Tim Krul after a back problem. Alex Tettey, Tom Trybull and winger Onel Hernandez are back fit, and Ben Godfrey will travel after a successful hernia operation. Jamal Lewis, Kenny McLean and Todd Cantwell have all overcome the injuries that caused them to withdraw from international duty.

The only previous Premier League meetings came in the 2015-16 season, with Bournemouth winning 3-0 at home after losing the reverse fixture. Bournemouth knocked Norwich out of the League Cup in their most recent encounter a year ago. They could earn three successive victories against the Canaries for the first time. Norwich have won only two of their past 13 league matches versus Bournemouth (D5, L6).

Aston Villa are unbeaten at home to Brighton in all competitions, with eight wins and three draws in 11 meetings. This is the first top-flight encounter between the sides since a goalless draw at Brighton’s Goldstone Ground in March 1983. They met at the Amex Stadium last month in the League Cup third round, with Aston Villa winning 3-1 against a youthful home side.

Aston Villa pair Tom Heaton and Bjorn Engels are fit after minor injuries. The only absentees are Jota, who has had a hernia operation, and James Chester, who is building up his fitness after a pre-season hamstring problem.

Brighton winger Leandro Trossard has returned to training following a groin problem and could be among the substitutes. Solly March and Shane Duffy are also available but Bernardo and Jose Izquierdo remain sidelined.

Chelsea have won six successive Premier League home games against Newcastle, scoring 17 goals and conceding three. Newcastle have won just one of their last 25 league visits to Chelsea, losing 17 and drawing seven. The Magpies’ only victory in seven Premier League meetings came at home in May 2018.

Chelsea have won four consecutive matches in all competitions, having triumphed in just two of their opening eight fixtures under Frank Lampard. They have only kept one clean sheet in 12 games during Lampard’s tenure. The 14 Premier League goals conceded is nine more than at this stage last season. Only five of the Blues’ 14 league points have come at Stamford Bridge. Chelsea have scored 13 Premier League goals via English players this season, five more than any other side. Tammy Abraham has scored nine goals in all competitions in 2019-20 – the joint-most of any Premier League player, along with Raheem Sterling. Lampard was unbeaten in all 17 Premier League appearances as a player against teams managed by Steve Bruce (W13, D4), scoring seven goals. Olivier Giroud has scored a career-high eight Premier League goals against Newcastle. However, he has failed to score in the last six meetings.

Chelsea midfielder N’Golo Kante has been ruled out after returning from international duty with a groin injury. Defenders Andreas Christensen and Antonio Rudiger remain out, but Mateo Kovacic is back in contention following a thigh problem.

Newcastle have no new fitness concerns and are expected to keep faith with the same team that beat Manchester United. Isaac Hayden is still suspended, while fellow midfielder Matt Ritchie is sidelined with an ankle injury.

Leicester’s James Maddison has got over the illness that caused his withdrawal from the England squad last week. Midfielder Dennis Praet, who remained in Belgium after international duty for personal reasons, should be available.

Burnley’s Johann Berg Gudmundsson faces several weeks out after suffering a hamstring injury playing for Iceland. Erik Pieters has overcome an ankle problem while Jack Cork and Ashley Barnes, who have respective shoulder and groin injuries, will be assessed. Midfielder Danny Drinkwater has not yet recovered from an ankle injury.

Burnley have not won in eight visits to Leicester since a 1-0 Championship victory in November 2006 (D4, L4). Leicester are unbeaten at home this season, winning their last three at the King Power Stadium. They could win five of their opening nine Premier League fixtures for the first time since the 1997-98 season.

Tottenham’s Giovani Lo Celso and Ryan Sessegnon are back in full training and could be involved. Christian Eriksen faces a fitness test after suffering a dead leg on international duty, while Hugo Lloris is out until the New Year.

Watford’s current run of nine successive top-flight away defeats at Spurs, by an aggregate scoreline of 24-4, is their longest such streak against a single opponent. Tottenham could equal their longest top-flight home winning run versus a single opponent of 10 victories, set against Blackburn from 1933 to 1966. Watford’s only victory in 12 Premier League meetings came last season at Vicarage Road (D3, L8).

Tottenham have conceded 10 goals in two competitive games for the first time since December 1997, when they lost 6-1 to Chelsea and 4-0 to Coventry. Spurs won their first four matches at the Tottenham Hotspur Stadium in all competitions, but have been victorious in only three of their subsequent eight home fixtures. They have lost five of their past 33 Premier League meetings against sides starting the day bottom of the table – all five of those defeats have been against teams beginning with ‘W’: West Ham, Wigan, and West Brom three times. Mauricio Pochettino has used 23 players in the Premier League this season, the joint-most in the top flight along with Watford and Norwich. Spurs’ last nine Premier League goals have been scored in the first half of games. Their last second-half league goal came from Lucas Moura against Manchester City on 17 August.

Wolves have won four of the past five meetings in all competitions. However, they have only won once in the last 10 top-flight encounters – 2-0 at home in September 2018 (D2, L7).

Wolves are assessing the fitness of Diogo Jota, Romain Saiss, Pedro Neto and Morgan Gibbs-White. Leander Dendoncker should be available despite missing Belgium’s recent games because of illness.

Southampton manager Ralph Hasenhuttl has hinted he is considering a recall for goalkeeper Alex McCarthy in place of Angus Gunn. Moussa Djenepo and Cedric are nearing a return from injuries but Saturday’s game will come too soon.

Manchester City have lost two of their past four league games, as many as in their previous 24 matches. They have won 10 of their last 11 away matches in the division. City have scored in 15 successive away league fixtures, including two goals or more in each of the last four. They have scored 27 league goals this season, seven more than any other side prior to the weekend. Sergio Aguero has played in six Premier League games at Selhurst Park and never scored. Kevin De Bruyne has provided eight league assists this season, twice as many as any other player.