Premier League: Troubled United hosts Leicester as Liverpool are at home to Newcastle 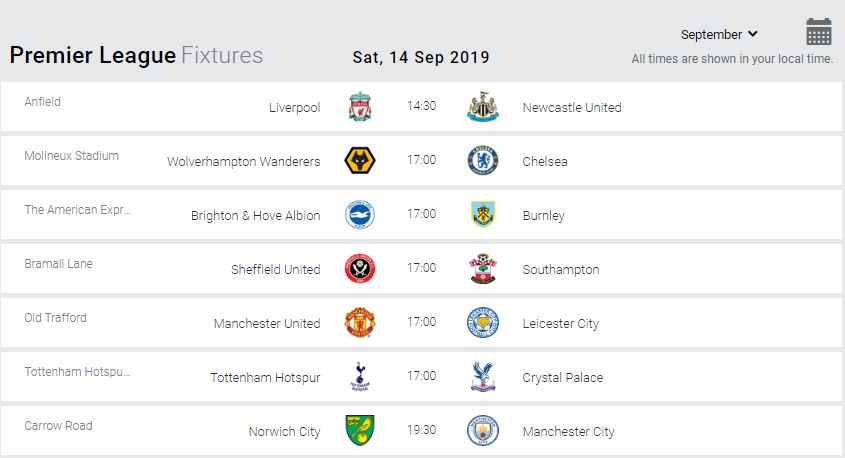 Liverpool duo James Milner and Joe Gomez are both pushing for recalls but keeper Alisson and Nathaniel Clyne are still missing. Midfielder Naby Keita is expected to return to training in the coming days following a pre-season calf injury.

Newcastle have lost 75 top-flight matches against Liverpool, more than versus any other team. Liverpool are unbeaten in their past 23 home league games against the Magpies (W19, D4) and have scored in each of those matches. Newcastle’s most recent win at Anfield was by 2-0 in April 1994. Liverpool have scored 98 Premier League goals in this fixture.

They are vying to become only the fourth English team to win 14 consecutive top-flight matches and the first to score more than once in each game. Jurgen Klopp’s side are unbeaten in 42 league matches at Anfield dating back to April 2017 (W32, D10). The Reds could equal their Premier League club record of 10 consecutive home victories. Liverpool have scored in 17 successive home league games since last October’s goalless draw with Manchester City. Eight of Liverpool’s 12 goals this term have been scored in the first half. Mohamad Salah has scored in each of his last three Premier League appearances against Newcastle.

Burnley did the double over Brighton last season, including winning 3-1 at the Amex Stadium in February. Albion are yet to beat the Clarets in the Premier League (D2, L2). Five of the last seven meetings have been draws.

Burnley’s Ashley Barnes has shaken off a groin strain and Robbie Brady should be fit again after a rib problem. Johann Berg Gudmundsson’s calf injury will be assessed but Danny Drinkwater is out after hurting his ankle in a night club fight.

Brighton will be without winger Leandro Trossard, who faces a month on the sidelines after injuring his groin on international duty. But defender Ezequiel Schelotto could make his comeback from a knee injury.

Paul Pogba has not recovered from an ankle problem and is one of several sidelined Manchester United players, with Anthony Martial and Luke Shaw also absent with injury. Aaron Wan-Bissaka is a doubt with a back injury, while Jesse Lingard will be assessed after illness.

Leicester have no new injuries in the wake of the international break, with all players involved returning fit. Matty James remains sidelined after having surgery on his Achilles.

After winning their opening game of the season, Manchester United have gone three games without a win (D2, L1). They have won just one of their last nine league fixtures (D4, L4). The Red Devils have kept only one league clean sheet in 15 league matches. They have conceded 23 goals in this run and scored just 20 times (W5, D4, L6). Daniel James has scored three goals in his first four Premier League matches for Man Utd. James could become only the second United player to score in his first three Premier League appearances at Old Trafford – the other was his current manager Ole Gunnar Solskjær in September 1996.

This is the first Premier League meeting between the sides since a goalless draw at Bramall Lane in March 1994. Southampton have won just one of their last five away league games against the Blades (D2, L2) and failed to score in four of them. Saints have lost seven of their nine top-flight away fixtures against Sheffield United, only winning once.

Southampton are again without Nathan Redmond due to an ankle injury, while left-back Kevin Danso is suspended. Ryan Bertrand and Michael Obafemi are available again and Moussa Djenepo could be involved.

Tottenham quartet Eric Dier, Tanguy Ndombele, Ryan Sessegnon and Kyle Walker-Peters will be assessed, having returned to training this week. Giovani Lo Celso suffered a hip problem on international duty and is out, while Davinson Sanchez is a fitness concern.

Crystal Palace defender Mamadou Sakho is in line for his first start since suffering a knee injury in February. James McArthur and Scott Dann require fitness tests, while Connor Wickham and Martin Kelly are certain absentees.

Crystal Palace have beaten Tottenham only once in their past 12 Premier League fixtures (D1, L10). Spurs have won eight successive league meetings, conceding just once during that run. Only 14 goals have been scored in 10 previous Premier League encounters at Tottenham. The first official fixture at the new Tottenham Hotspur Stadium was Spurs’ 2-0 over Palace last April. The Eagles beat Spurs 2-0 at Selhurst Park in the FA Cup last season.

Tottenham have only averaged a point per game from their last 16 Premier League fixtures (W4, D4, L8). They have suffered two defeats in four home games, more than they had in their previous 30 Premier League fixtures. Spurs have drawn two of their opening four league games – they drew just twice throughout the whole of their 2018-19 Premier League campaign. Mauricio Pochettino’s side have trailed for a league-high 127 minutes at home this season. Tottenham have conceded five first-half goals; only Norwich, with seven, have let in more. Their last five league games have produced 17 goals.

Wolves defender Wily Boly is suspended following his sending off against Everton, so Jesus Vallejo could make his Premier League debut. Wing-back Matt Doherty is in contention despite missing international duty with Ireland because of minor surgery.

Chelsea defender Antonio Rudiger might make his first appearance of the season after recovering from a knee injury. Pedro returns after missing one game with a hamstring problem, but N’Golo Kante remains out with an ankle injury. Mateo Kovacic is fit despite withdrawing from international duty with Croatia.

Chelsea’s most recent league victory against Wolves was at Molineux on 2 January 2012, when Frank Lampard scored the decisive goal in the 89th minute. Wolves took four points out of a possible six against the Blues last season, one more than they managed in their first eight Premier League games against them. Chelsea have won five of their past seven top-flight matches at Molineux, although Wolves have claimed victories in two of the last three such meetings.

The only time the Blues have won fewer than two of their opening five Premier League games was in 2015-16. They have conceded nine Premier League goals this season – only Norwich, with 10, have a worse record. Chelsea have already given 703 minutes to English players aged 21 or younger in this season’s Premier League, more than in any of their previous 14 seasons. All three of their Premier League away wins this calendar year have been against newly-promoted sides; they are winless in their other eight league matches on the road (D2, L6), scoring just once and conceding 21 times. Tammy Abraham could become only the third player aged 21 or under to score in three consecutive Premier League appearances, emulating Cristiano Ronaldo (2006) and Dele Alli (2017).

Manchester City’s Aymeric Laporte is likely to be out for six months. The defender, who required knee surgery after being injured against Brighton, may be replaced by the fit-again John Stones, while forward Gabriel Jesus is available after recovering from a hamstring problem.

Norwich’s solitary win in the past 14 Premier League meetings was by 3-2 at the Etihad Stadium on the final day of the 2012-13 season (D6, L7). The Canaries’ only other Premier League win against Manchester City came at home in February 1993.

Pep Guardiola’s side have won their last nine Premier League away games, two short of the top-flight record set by Chelsea in 2008 and matched by City in 2017. Manchester City are unbeaten in their last 25 top-flight games against newly-promoted sides (W20, D5), with their last such defeat coming at Burney in March 2015. Sergio Aguero can become the third player to score in his club’s opening five Premier League matches, following in the footsteps of the late Jose Antonio Reyes (for Arsenal, in 2004-05) and Wayne Rooney (for Manchester United in 2011-12). Having also scored on the final day of last season, Aguero can become the first Manchester City player to score in six consecutive top-flight games since Francis Lee did so in seven matches from November 1971 to January 1972. Aguero has been involved in eight goals in his five league starts against Norwich, scoring five and assisting a further three. David Silva has set up two goals in each of his last two games – no player has ever created two or more goals in three consecutive Premier League appearances.