Premier League: Liverpool out to maintain winning run as City are away to troubled Everton 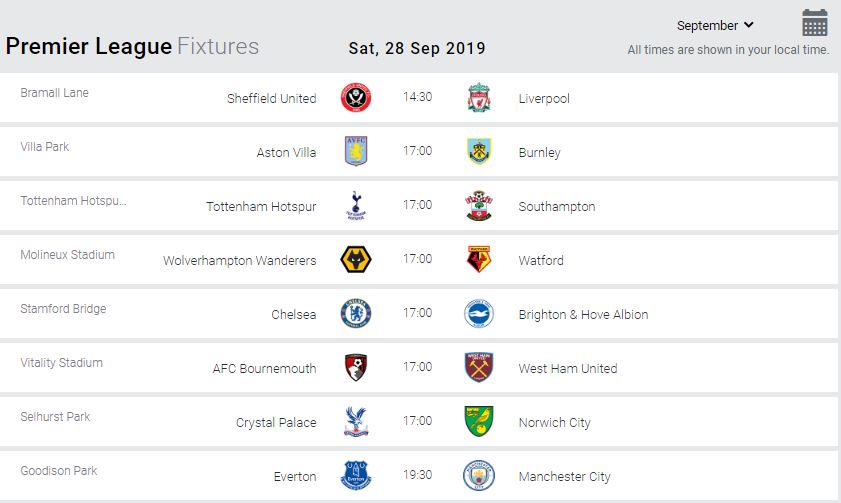 Liverpool have never won a Premier League match away to Sheffield United (D2, L1), scoring just once. Bramall Lane is one of only three stadiums Liverpool have played at without winning in the Premier League, along with Nottingham Forest’s City Ground (five games) and Blackpool’s Bloomfield Road (one match). The Reds’ last victory away to the Blades came in August 1990, when – as reigning champions – they won 3-1 thanks to goals from John Barnes, Ray Houghton and Ian Rush. The home side played 75 minutes with a defender, John Pemberton, in goal after keeper Simon Tracey was injured.

Sheffield United boss Chris Wilder made 10 changes for the Carabao Cup defeat to Sunderland and will recall the majority of those rested in midweek. David McGoldrick is a major doubt with a groin injury, while fellow forward Billy Sharp completes a three-game ban.

Sadio Mane is available despite suffering a dead leg against Chelsea on Sunday. Divock Origi could also feature after returning to training following an ankle problem. James Milner is expected to be fit despite hurting his back against MK Dons in a game which also saw Curtis Jones suffer a knock. Xherdan Shaqiri is ruled out, while this game comes too soon for Alisson, who is nearing a return to full training.

The Reds could become only the second team to win their opening seven Premier League games, following in the footsteps of Chelsea, who began their title-winning campaign in 2005-6 with nine victories. However, the only previous occasion Liverpool won their first seven games in the top flight was in 1990-91, when they started with eight straight wins but still ended as runners-up to Arsenal. Liverpool have won their last 12 Premier League matches against newly-promoted sides, scoring 35 times and conceding only four goals. The Reds’ 15-match winning streak is three shy of the top-flight record, set by Manchester City between August and December 2017. The Merseysiders are also unbeaten in 23 league matches – they have not had a longer undefeated streak since a 31-game sequence from May 1987 to March 1988. They have been leading at both half-time and full-time in all six of their league games this season. Sheffield United will be the 24th different side Mohamed Salah has faced with Liverpool in the Premier League – he has scored against 21 of the previous 23, only failing to net against Swansea (two games) and Manchester United (four matches).

Bournemouth trio Simon Francis, Lloyd Kelly and Arnaut Danjuma all made their comebacks from injury in the EFL Cup in midweek and could feature. David Brooks, Dan Gosling, Adam Smith, Junior Stanislas and Charlie Daniels are still unavailable.

West Ham are boosted by the return of Arthur Masuaku following suspension, while Manuel Lanzini is also available. Ryan Fredericks is being assessed after suffering a knock last week but Michail Antonio and Winston Reid remain out.

Bournemouth have won four of the eight previous Premier League encounters (D2, L2). The Cherries are unbeaten in the past five league meetings (W3, D2) and completed the league double over West Ham last term. There have been 17 goals scored in four top-flight matches between the sides at the Vitality Stadium. Only eight of the 30 Premier League goals in this fixture have been scored in the first half, and 10 of the last 11 have come in the second half.

Aston Villa boss Dean Smith made nine changes against Brighton in the Carabao Cup and will recall a number of key players. Henri Lansbury, Jonathan Kodjia and James Chester are all ruled out but Matt Targett is available to make his league debut for the club.

Burnley could welcome back winger Johann Berg Gudmundsson, who has recovered from a calf problem. Dwight McNeil should be fit despite suffering a dead leg against Norwich.

Burnley have lost only one of their last eight top-flight meetings with Aston Villa (W3, D4). The most recent encounter came in May 2015, when the Clarets won 1-0 at Villa Park on the final day of the season courtesy of a Danny Ings goal. All 12 Premier League goals in games between these sides have been scored by British players.

Brighton have lost all eight league meetings with Chelsea (four in the second tier and four in the Premier League). Defeat for Brighton would set a new Football League record (dating back to 1888) for most games played against a particular opponent with a 100% losing record. Chelsea have won all five competitive home fixtures against the Seagulls by an aggregate score of 12-0. Brighton have failed to score in both of their previous Premier League trips to Stamford Bridge and have mustered just two shots on target.

Chelsea have eight points after six matches, their joint-fewest over the last 18 Premier League campaigns. They have equalled their Premier League club record of three home games without a win at the start of a season (D2, L1). The last time Chelsea failed to win any of their opening four league matches at Stamford Bridge was in 1986-87. The Blues have conceded 13 league goals, the third-highest tally in the division. The last time Chelsea failed to keep a single clean sheet in their opening seven top-flight games was in 1990-91. Tammy Abraham has scored seven goals in his last four league matches. Kepa Arrizabalaga has conceded more Premier League goals this season (13) than he has made league saves (10).

Chelsea left-back Emerson is out for at least a month after he suffered a reoccurrence of a hamstring injury. Antonio Rudiger and Ruben Loftus-Cheek are also missing, but Olivier Giroud and Andreas Christensen are available.

Brighton defender Shane Duffy has been ruled out with a calf strain and Bernardo is also absent. Solly March and Leandro Trossard are unlikely to feature but Glenn Murray and Alireza Jahanbakhsh could both return following injury.

Crystal Palace are assessing Mamadou Sakho’s fitness after Roy Hodgson confirmed he has suffered an injury. Forward Connor Wickham returned to first-team training this week but is unlikely to be involved.

Norwich’s lengthy injury list now includes goalkeeper Tim Krul and captain Alex Tettey with both men missing out against the Eagles. Defender Max Aarons has recovered from an ankle injury sooner than expected and could be involved. Ralf Fahrmann is rated doubtful with Onel Hernandez, Timm Klose, Tom Trybull, Mario Vrancic and Christoph Zimmermann all still on the sidelines for the Canaries.

Crystal Palace have won only five of their 22 top-flight matches against Norwich (D7, L10). However, the Eagles completed the double over Norwich when both sides were last in the Premier League in 2015-16. Norwich are winless in their last 15 away league matches against Palace (D5, L10), last recording a victory in May 1996. In every Premier League season that Crystal Palace and Norwich have met, at least one of the sides has been relegated.

Tottenham’s defeat at St Mary’s in March was only their second in their last 14 Premier League meetings with Southampton. Southampton have won just one and lost seven of their last eight games away at Spurs. In total, they have won at Tottenham on just three of their 20 visits in the Premier League. However, Southampton have only won more Premier League matches versus Newcastle United (15) than they have against Tottenham (12). The Saints are looking to win consecutive league matches against Spurs for the first time since winning three in a row between January 2003 and March 2004.

Tottenham have lost nine of their last 18 Premier League fixtures. Prior to this run, they had lost just nine of 50 top-flight matches. Spurs have lost 10 league games in 2019. Of Premier League ever-presents, only Brighton (13), Watford (12) and Bournemouth (11) have lost more. Mauricio Pochettino’s side won their first four matches at the Tottenham Hotspur Stadium, but have won just two of their subsequent six fixtures there in all competitions.

Tottenham manager Mauricio Pochettino remains without injured pair Giovani Lo Celso and Ryan Sessegnon. The likes of Harry Kane, Hugo Lloris and Jan Vertonghen are likely to come back into the starting line-up after being rested against Colchester.

Southampton goalkeeper Alex McCarthy is a doubt after he picked up a slight muscle problem against Portsmouth in midweek. Moussa Djenepo remains unavailable because of a leg injury.

Wolves made 10 changes in the Carabao Cup in midweek and will recall most of the players rested against Reading. Bruno Jordao and Meritan Shabani were injured on debut in that game and are missing, with Shabani out for at least a month due to a knee injury.

Romain Saiss returns after completing a one-game ban following his sending off at Crystal Palace last weekend. Watford will monitor defender Craig Cathcart, who is back in training after several weeks out with a thigh problem. Danny Welbeck is fit after scoring in midweek on his comeback from injury, though the Hornets are likely to be cautious with the injury-prone striker.

None of the four top-flight matches between the sides has ended in a home win, and last season’s two games – the only previous Premier League encounters – were both won by the away team. The last home win in this fixture (in any division) was Watford’s 2-1 victory at Vicarage Road in a Championship match in November 2012.

Everton’s 4-0 win against Manchester City in January 2017 is their only victory in 12 Premier League meetings (D4, L7). City can win four consecutive league matches against Everton for the first time since March 1972.

Manchester City’s tally of 24 goals in the opening six league games is the most by any top-flight team at this stage since Wolves scored 25 in 1955. City have scored in each of their last 28 Premier League games, a streak bettered only by Arsenal (55 matches between 2001-2002) and Manchester United (36 in 2008). Sergio Aguero could become just the fourth player to score in eight consecutive Premier League appearances. The Argentina striker can also become the first player to score in eight straight top-flight fixtures for the club since 1957. However, Aguero has netted just two league goals in 793 minutes against Everton, his worst minutes-per-goal ratio against any opponent he has faced more than once. Victory in this match would see David Silva reach 200 Premier League wins faster than any other player, on his 289th appearance. John Terry holds the current record with 305 matches. Pep Guardiola has won all seven competitive fixtures as a manager against Marco Silva, recording an aggregate score of 24-3. Seven of the last 11 Premier League goals City have conceded have come from set-pieces (excluding one penalty).

Midfielder Andre Gomes may be out until mid-October with the rib injury that has seen him miss Everton’s last three matches. Jean-Philippe Gbamin remains a long-term absentee with a thigh injury but Alex Iwobi could start after impressing in the midweek Carabao Cup win.

Manchester City are expected to make several changes to the side that won at Preston on Tuesday. Kevin de Bruyne, Nicolas Otamendi and Sergio Aguero are all set to return.