Champions League: Liverpool, Chelsea face tricky openers as Barca are away to Dortmund 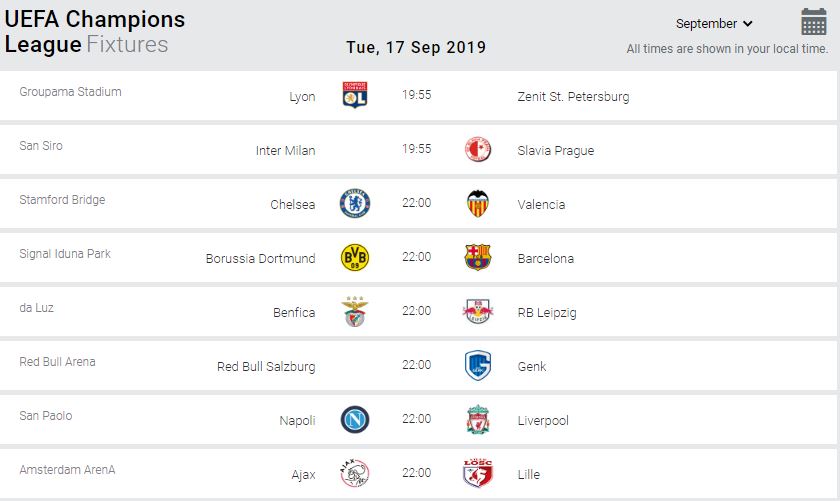 Both Kone and Thiago Mendes were suspended at the weekend but the duo are available here and should replace Tete and Reine-Adelaide.  Depay was rested at the weekend but he will surely return and Traore or Terrier will make way for the talented Dutch forward against Zenit. Fernando Marcal remains out with injury.

Malcom is their only confirmed absentee as the Brazilian forward has been ruled out of action for a couple of weeks and he misses out. Kuzyaev returned from injury at the weekend and he will likely keep his place though Erokhin and Rigoni will both be hoping for recalls.

Apart from a friendly, the two teams last met over two legs in this very same competition which Zenit won 5-1 on aggregate. Their last clash here saw Lyon lose 2-0. Only one of their previous two meetings have featured over 2.5 goals on the charts. Both teams have found the back of the net together just once as well.

Inter boss Conte has no fresh injury concerns from the 1-0 win over Udinese on Saturday, and it would not be a surprise to see almost the same XI sent onto the field. Lukaku is almost certain to lead the line in a 3-4-3 formation, while Alexis Sanchez is pushing for a start having made his debut for the club off the bench against Udinese.

As for the visitors, both goalkeeper Ondrej Kolar and defender David Hovorka should start having returned from injuries for the win over Slovacko at the weekend. The likes of Matej Pukkrab, Vaclav Drchal, Borek Dockal and Vaclav Kadlec, though, are still on the sidelines.

The Italian outfit have begun their Serie A campaign on a very convincing note and are currently on a formidable three-match winning streak. Their newly added recruit Lukaku has not been shying in getting off the mark either and has already two to his personal tally. Slavia Prague, on the other hand, are on an unbeaten run of their own, back in their respective domestic campaign. The visitors are on top of the table with seven wins from their last nine games and are also the only side in the ladder that are yet to taste defeat. Despite it all, both Inter Milan and Slavia Prague are arguably the two teams who are the lesser favorites to make it into the next round, considering that they have been drawn in a cluster dubbed as the “Group of Death”. With home advantage favoring the Nerazzurri in this one, an opening defeat for Slavia Prague is certainly looming large.

Despite making a return at the weekend, Antonio Rudiger will not feature on Tuesday due to a groin problem with Emerson also out of action. N’Golo Kante, Callum Hudson-Odoi, Reece James are back in training after their respective injuries but are not yet match fit.

Valencia almost have a full squad available for the trip to London, but are without long-term injury absentees Carlos Soler and Cristiano Piccini.

Chelsea and Valencia have met six times previously in European competition, with the Spanish club not winning any of these matches (D3 L3). The only club that Chelsea have faced as often in European competition without losing as they have against Valencia (six games: W3 D3) is German club FC Schalke 04 (six games: W4 D2). Chelsea didn’t lose a single match in European competition in 2018-19, winning 12 and drawing three of their 15 matches in the UEFA Europa League on the way to winning the final and qualifying for the 2019-20 UEFA Champions League. Chelsea’s 12 wins in the 2018-19 UEFA Europa League has only been bettered once in a major UEFA European competition (excluding qualifiers) within a single season: Atletico Madrid in 2011-12 (13 wins, also in the UEFA Europa League). Valencia have reached the UEFA Champions League in consecutive seasons for the first time since 2012-13 (three in a row), which was also the last time they made it to the knockout stages of the competition, before being knocked out by Paris Saint-Germain in the last 16. Frank Lampard will take charge of a UEFA Champions League game for the first time in his managerial career. As a Chelsea player, he made 102 appearances in the competition and is one of only 22 players to have played 100+ games in the competition with the same club.

Ajax will have to cope without influential midfielder Donny van de Beek and full-back Noussair Mazraoui. Van de Beek is struggling with a thigh injury while Mazraoui returned from playing in Olympic Games qualifiers for Morocco last week with a knee complaint.

Lille lost key forward Nicolas Pepe to Arsenal this summer but young Nigerian forward Victor Osimhen has made a flying start to the season with five goals in five games. The 20-year-old is likely to start despite Loic Remy returning to fitness. Jonathan Ikone is also one to watch with the winger scoring on his debut for France during the international break.

Ajax are full of confidence at the moment and will be hoping to get out of this group. To do so, wins at home are a must and that must start with Lille on Tuesday.

The French side are dangerous but they are not as strong as they were last season. They will not just sit back in Amsterdam and that should make for a good match.

With Hakim Ziyech and Dusan Tadic in good form at the moment, Ajax will definitely score but they must keep it tight at the back, something which has been a little difficult for Ten Hag’s side so far this season.

Benfica have a lengthy injury list for this time of the season, which Chiquinho added to when he limped out of the defeat to Porto. Lage is also without Gabriel Gedson, German Conti and David Tavares – all of whom are yet to feature this season – while Carlos Vinicius is also sidelined. The hosts do boast a man in form in Pizzi, though, with the attacker having scored again at the weekend to make it six goals in five games so far this term.

Leipzig have their own form player in Timo Werner, who has five goals in four league appearances so far and continues to be linked with a move to Bayern Munich. Nagelsmann will be without Tyler Adams and Hannes Wolf, however, with the former sidelined since early August due to a metatarsal injury and the latter breaking his ankle on international duty with Austria Under-21s.

This will be the first-ever competitive meeting between Benfica and RB Leipzig. In the last two seasons, Benfica have been outscored 7-25 in the UEFA Champions League; collecting just seven points from a possible 36 – all of which came in 2018-19 campaign. There were 21 scored in RB Leipzig’s six Champions League matches in 2017-18 season, at an average of 3.5 per game. They were one of four teams that season to both score and concede 10+ goals in the group stage, along with Porto, Napoli and Sevilla. RB Leipzig have won just three of their 12 European away games in all competitions but have only conceded two more goals than they have scored themselves on the road. Benfica are Portugal’s sole representatives in the UEFA Champions League this season, and this is the first time since 2009/10 campaign that there is only one Portuguese club in the competition.

Lukasz Piszczek missed the Leverkusen game due to injury and is unlikely to feature on Tuesday. Upfront, Julian Brandt is expected to retain his place in the team despite a clumsy display against his former club. He will be starting alongside Marco Reus and Jadon Sancho in the creative trio, just in behind the main striker Paco Alcacer.

Lionel Messi has been included in the squad that will face Dortmund. But, it is unlikely that Ernesto Valverde will want to risk him, though he could feature as a substitute. Luis Suarez who returned from injury this past weekend is expected to start alongside summer signing Antoine Griezmann and Charles Perez up front.

This will be the third meeting between the two sides in a competitive match. The previous two came in the 1997-98 European Super Cup over two legs, with Barcelona winning the first leg before drawing 1-1 in Germany. This is the fourth successive season that Dortmund have been in a UEFA Champions League Group Stage with a club from Spain. Barcelona are unbeaten in their last 14 Champions League Group Stage games and have lost just one of their last 28 at this stage of the competition. Borussia Dortmund have won just two of their last eight Champions League home matches, losing their last match there: 0-1 against Tottenham Hotspur in the Last 16 in the 2018-19 campaign. 16 of the last 17 defeats suffered by Barcelona in the Champions League have come in away matches: two of which have come in Germany (both by Bayern Munich).

Divock Origi missed out on Liverpool’s 20-man squad which travelled to Italy on Monday following his injury suffered against Newcastle, with Alisson Becker (leg) Naby Keita (groin) and Nathaniel Clyne (knee) also missing with longer-term conditions. The fitness of left-back Andy Robertson will be assessed prior to kick-off.

Arkadiusz Milik looks likely to miss out for Torino, having been absent since suffering a muscle injury in mid-August, but Lorenzo Insigne, who scored against the Reds when the two sides met in pre-season, may be fit after training alone for part of last week.

Salzburg has a wealth of talent at their disposal but will be without the injured duo of Alexander Walke (metatarsal) and Marin Pongracic (thigh). In 19-year-old Erling Haaland Salzburg have arguably Europe’s most in-form player, and he continued that at the weekend with another hat-trick – incredibly his third of the season already. The Leeds-born son of former Manchester City defender Alf-Inge Haaland has 14 goals in eight appearances across all competitions this season and will now be looking to prove himself on the big stage with Europe’s finest clubs beginning to circle – if they weren’t already after his nine-goal haul in an Under-20 international for Norway in May.

Genk manager Felice Mazzu has an almost fully-fit squad to choose from, although first-choice goalkeeper Danny Vukovic is a long-term absentee and was not included in the Champions League squad. The Belgians have had to cope with the loss of Leandro Trossard, who joined Brighton & Hove Albion during the summer, and so far Ally Mbwana Samatta has helped to fill the void with five goals in six league matches – a return which puts him joint-top of the scoring charts despite Genk’s indifferent start to the campaign. Samatta is a notable doubt for the visitors due to a knee injury, though, while Neto Borges could also miss out with a foot issue.

Salzburg make their first ever appearance in the Champions League group stage after several failed attempts to qualify from the play-offs. They face a Genk side that have not won any of their 12 group stage matches themselves so the hosts will be more than confident of pulling off an opening win.