Liverpool, City in Premier League top of the table clash 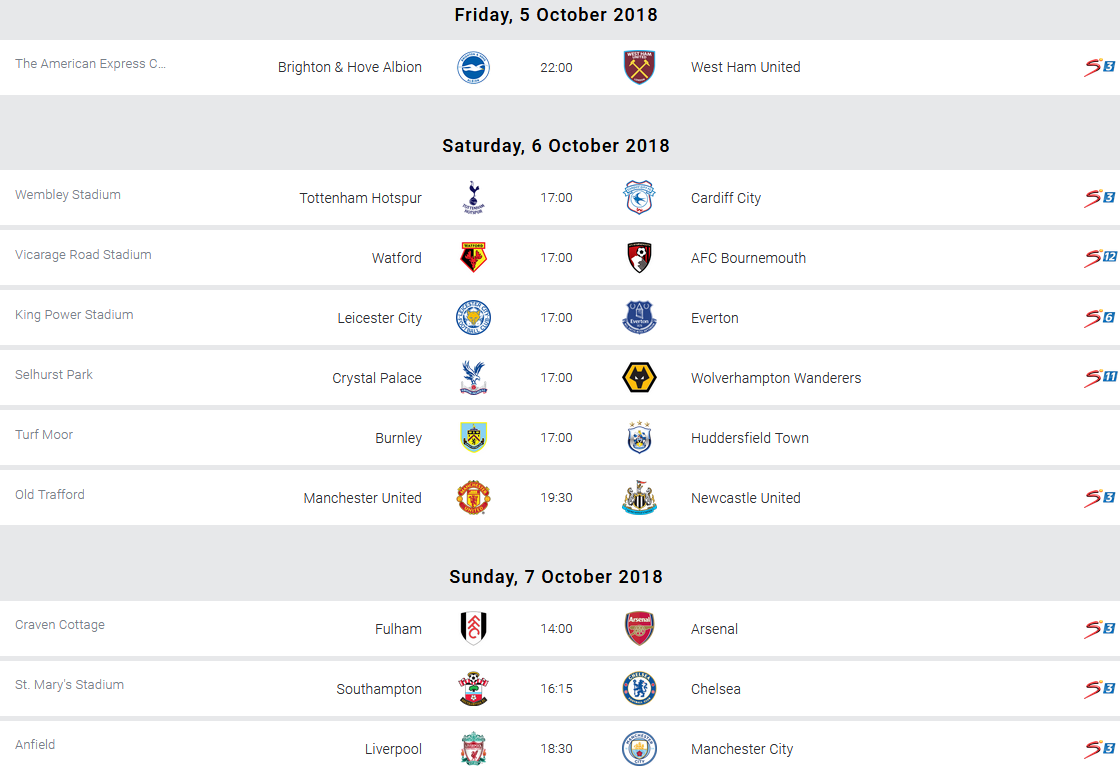 On Friday, 15th placed Brighton welcome inform West Ham at the Amex Stadium. Brighton & Hove Albion will assess the fitness of Dale Stephens, who missed Saturday’s defeat at Manchester City because of a hamstring injury. Pascal Gross remains sidelined with ankle damage, but Jose Izquierdo is pushing for a first start this season.

For West Ham, they are likely to be unchanged, with Carlos Sanchez and Jack Wilshere among the continued injury absentees. Javier Hernandez is in full training after overcoming glandular fever but he may not be risked on Friday. Marko Arnautovic will play despite an ongoing knee problem.

Brighton won both Premier League meetings last season, including 3-0 away on a Friday. West Ham have lost all three of their top-flight visits to Brighton. Their only away victory in the last seven attempts in this fixture came in the Championship seven years ago. The first meeting between these clubs came 115 years ago this month, with Brighton winning 3-2 at home in the Southern League First Division.

James Tarkowski and Steven Defour are doubts for Burnley as they look for their third straight Premier League win when they host Huddersfield on Saturday.  Burnley’s Robbie Brady has suffered a small setback in his recovery from knee and then hamstring issues and will not be available until after the international break at the earliest, while defender Ben Gibson (hernia) and goalkeeper Nick Pope (shoulder) remain sidelined.

For Huddersfield, Huddersfield are monitoring defender Christopher Schindler, who limped off with a knee injury during last week’s defeat to Tottenham. Fellow centre back Terence Kongolo is set for a spell on the sidelines after damaging his hamstring in that match.

Burnley are unbeaten in five league matches against Huddersfield (W3 D2 L0) since losing 2-1 in the Championship in November 2013.

Crystal Palace will be without the injured trio of Conner Wickham, Christian Benteke and Scot Dann. Jairo Riedewald is also a doubt for Roy Hodgoson’s side.

For Wolves, they have only Helder Costa as an injury concern after the Portuguese sustained knock in their 2-0 win over Southampton last week.

Palace won the last meeting between these two sides 3-1 back in 2013. The victory is part of a three-game winning run that the Londoners are currently enjoying over Wolves. Wolves have won only two of their last seven visits to Palace with both of those victories coming in the Championship.

Leicester could win consecutive top-flight home matches versus Everton for the first time since 1966. Claude Puel’s first match as Leicester manager was a 2-0 Premier League home win in this fixture last season, one of only four Foxes victories against Everton in 24 attempts (D13, L7). The team scoring first in this Premier League meeting has never lost.

Leicester City have an unchanged squad, although winger Demarai Gray is nearing a return sooner than expected from the ankle injury he suffered during the League Cup win over Wolves. Gray was originally ruled out for up to six weeks but manager Claude Puel said his condition is improving quickly.

Everton could welcome back Phil Jagielka, who has missed six games with a knee problem, but Yerry Mina is out. Andre Gomes has resumed training following a hamstring injury.

Spurs will be hoping to put their horrendous show at home to Barcelona in the mid-week behind them and get back to winning ways when they host a Cardiff side that has lost all its last five Premier League games.

Tottenham’s lengthy injury list includes Dele Alli and Jan Vertonghen, who both have hamstring problems. Christian Eriksen, Mousa Dembele and Serge Aurier are all expected to be absent with thigh injuries.

Neil Warnock celebrated two years in charge of Cardiff on Friday and has warned he might pick “10 defenders” to face Tottenham. Nathaniel Mendez-Laing and Lee Peltier remain absent with knee and shoulder injuries respectively.

Tottenham are on a seven-match unbeaten streak against Cardiff, winning five and drawing two. Cardiff have only scored one goal during that spell, which includes 1-0 home and away defeats when the Bluebirds were last in the Premier League in 2013-14.

Gerard Deulofeu, Stefano Okaka, Miguel Britos and Sebastian Prodl have all returned to training after injury problems and could feature for Watford. Defender Marc Navarro is ruled out, joining Daryl Janmaat and Tom Cleverley on the sidelines.

Bournemouth have no new injury concerns ahead of Saturday’s game. Fit-again winger Junior Stanislas has featured in the last two league games as a substitute and will hope to return to the starting line-up. Left-back Charlie Daniels made his comeback from a knee problem by playing for the under-21 side on Tuesday, but this game may come too soon for him.

Watford have lost just one of their last 14 games against Bournemouth in all competitions (W6, D7). Five of the six Premier League meetings have ended as draws, with the exception the Hornets’ 2-0 win at the Vitality Stadium in August 2017.

Manchester United have had a terrible last few weeks registering zero victories in their last four games in all competitions. The run continued midweek with a 0-0 draw at home to Valencia in the Champions League. They will hope to get back to winning ways when they host a Newcastle United side that has not won any of their seven league fixtures this season.

Ashley Young is back in contention for Manchester United after missing the draw against Valencia because of an unspecified injury. Phil Jones, Andreas Pereira and Diogo Dalot will hope for recalls after being left out of the squad in midweek. However, Marcos Rojo, Jesse Lingard and Ander Herrera remain unavailable.

Newcastle could again be without striker Salomon Rondon, who is not expected to return from a thigh problem until after the international break. Defenders Paul Dummett and Federico Fernandez are doubtful with hamstring injuries, while it remains to be seen whether DeAndre Yedlin, who was forced off last weekend with a knock, is fit to play.

Manchester United have lost one of their last 36 home matches against Newcastle in all competitions (W26, D9), with that solitary loss coming in December 2013 during David Moyes’ tenure. The Magpies beat the Reds 1-0 at St James’ Park in February, and could record back-to-back league wins against them for the first time since 1972. Newcastle have lost seven Premier League matches when scoring first against Manchester United, one short of the record for one team against another.

Fulham defenders Joe Bryan and Timothy Fosu-Mensah have been ruled out of Sunday’s clash against Arsenal. Bryan has a hamstring injury and Fosu-Mensah has a dislocated shoulder, with the pair joining midfielder Neeskens Kebano (ankle) on the sidelines. Defender Alfie Mawson is in contention to return following a back injury, while fit-again midfielder Tom Cairney is pushing to start.

?  Fulham last faced Arsenal in January 2014 in the Premier League, losing 2-0 – the Cottagers have won just three of their 26 Premier League games against the Gunners (D5 L18). Arsenal have won their last two Premier League matches at Craven Cottage, with this their first visit since August 2013. Fulham haven’t kept a clean sheet in a home Premier League London derby match since beating QPR 6-0 in October 2011 – they’ve conceded in each of their 14 such matches since.

Chelsea go to Southampton in the Premier League on Sunday right in the mix at the top of the early table. The Blues have enjoyed an impressive start to their first campaign under the charge of Maurizio Sarri and remain one of three unbeaten teams at the top, alongside Manchester City and Liverpool. The 2016 champions sit two points off the top of the EPL table in third, thanks to five straight victories to start the season.

Southampton are once again limping along in the lower reaches of the division. The Saints haven’t won in three since a 2-0 success at Crystal Palace. Mark Hughes’ side also come into this one off the back of a pair of defeats, away to Liverpool and Wolves.

Mark Hughes  is likely to make several changes to the side that lost 2-0 to Wolves last week. Only Shane Long will be out for the Saints when Chelsea come calling on Saturday.

For  Chelsea, Maurizzio Sarri rested a few players in their Europa League 1-0 win over Videoton on Thursday and they are all expected to return to the starting line-up. However, Mark Van Ginkel is still out with an Achiles Knee Injury.

The two most exciting teams in England – maybe even Europe – play each other on Sunday. Two thrilling sides full of creativity, pace, skill, made up of individuals determined to play open, fast football. It’s the Premier League’s record scorers vs their very real, very frightening rivals. The ‘tactical genius’ vs the manager who keeps beating him. What message would a win deliver for the victors? What effect might a defeat have? And more importantly – how will the game be decided?

Kevin De Bruyne returned to training earlier this week after several weeks on the sidelines having suffering a lateral collateral ligament lesion in August but didn’t travel with the squad for the midweek Champions League game in Hoffenheim. Benjamin Mendy has missed the past few games with a foot injury, while Ilkay Gundogan came off with a leg problem during the win at Hoffenheim. Goalkeeper Claudio Bravo is unavailable, having sustained an Achilles tendon injury. The Chilean ‘keeper underwent scans, which confirmed a rupture in the tendon of his left foot.

Jurgen Klopp will monitor the condition of his players following their Champions League assignment away at Napoli on Wednesday evening. Divock Origi has recovered from an ankle problem while central defender Virgil van Dijk has shaken off a rib injury. Adam Lallana is continuing his rehabilitation from a groin problem.

City will be seeking to maintain a fine run of league form with Pep Guardiola’s side having won their past four league fixtures to make it six wins out of seven so far. Liverpool have also won six out of their first seven league matches, their 100 percent finally being checked last weekend with a 1-1 draw at Chelsea. Sergio Aguero has scored three Premier League hat-tricks in 2018, including one against Huddersfield Town earlier this season. Only two players have netted four or more hat-tricks in a calendar year in the competition, with Harry Kane doing so six times in 2017 and Alan Shearer registering five trebles in 1995. Altogether, 31 players have played for both Liverpool and City over the course of their careers.