An Express FC side intent on arresting a rot of four losses on the bounce in the league had only victory to think of their opponent’s spirited pain hardly registering. And, for Sadolin Paints, the pain couldn’t have been worse as the lone strike by Mahad Kakoza stood for almost the 90 minutes.

And the Painters had only themselves to blame at Namboole Stadium as the last nail in their relegation coffin was a pile driver every team would slap themselves to concede.

Express, who started with just one natural striker in Jean Toya Didier, could have scored a couple of goals if they had made the most of the chances they created but that will matter for less for the Red Eagles.

Minutes after scoring the opener, Kakoza missed a chance to double the lead for the visitors as his effort was cleared off the goal line by Moses Kibirige . The visitors continued to pile pressure on a Sadolin side that were no better than a drowning man clutching at a straw.

The onslaught of attacks saw Suleiman Jjingo’s corner kick delivery headed over the bar by Stephen Luswata, who later  missed another golden opportunity when he picked a misplaced back-pass, sidestepped onrushing Sadolin Paints custodian Hilbert Atim, only to see his shot blocked by a desperately recovering Kibirige.

Sadolin’s only chance in the first 45 minutes fell to Fred Kyambadde, whose low shot squirmed inches past the woodwork after he was played through by Herbert Katongole.

For the second half, Sadolin brought on veteran striker Karrim Nduggwa and Safi Basan, and the pair kept the visitor’s rearguard quite busy, including a moment when FC goalkeeper Emmanuel Opio was called into action with a double save, stretching to punch away Nasser Majidu’s free-kick before smothering captain Allan Oryek’s follow-up.

The painters, who are now under caretaker manager Kenneth Maganda after the sacking of their manager Musafiri and his assistant Kirumira following a string of bad results, are now officially relegated, sitting second from bottom on the 16 team league table with 26 points from 29 games .

What next for both clubs?

Both clubs are in Uganda Cup semis with Sadolin waiting for the second leg of the tie following a 2-0 loss against Paidha as Express date KCCA in the second semifinal on a date that is yet to be decided. 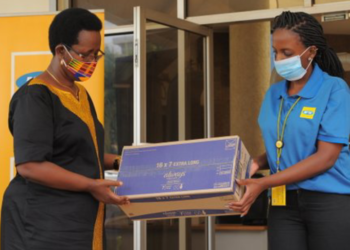