CAXTON PETER KASOZI-BATENDE: Is Uganda to ever attain middle-income status between the years 2032 to 2040?

Public funds that would have been used are wasted and have ended-up being diverted to political-party aspirations than to cater for community and national demands and interests. This has matured into the habit of non-compliance. Also, an outdated local-government structure design that doesn’t fund economic regeneration in communities equally.

Corrupt administration another aspect: siphoning, graft embezzlement of public funds.  Breach of regulations, policies, practices as well impunity to those deserving to be made accountable. This has hindered investment that would have triggered development broadly across Uganda. Wealth is accumulated through avarice and venality.

By today, every community should have been independent in the aspect of: education centres, job opportunities generating centres for skilled and unskilled labour and health treatment centres. The education, health, transport and food strategized within affordability of the community.

There is too much dependency on loans by Ugandans to start-up businesses than income-saving to be a source of capital. High interest rates, taxes have a negative impact.

Loans borrowed by the government have to be repaid, henceforth taxes constantly rising.

Government has too much relied on private sector to generate industrialization and innovation. Employees are relatives to the owner of the industry or referred there by a family relative or friend or government official. By doing so, limits the offering of jobs to the locals, henceforth the community not taken out of extreme poverty. The oil extraction project being waited for and due to start; is already eyed by people having a connection with the government, who will end-up working there.

Without competition demand for labour between employers, emoluments will stay lower than middle-income status. The government should strengthen the tourism sector.  I see lakes shores that the government is neglected to use for entertainment as a marketing approach. Europeans travel to Holland’s rivers for boat cruise or travel to Ibiza beach in Spain for lively bar music dancing nightlife clubs.

By now there would have been seed cleaning plants and milling plants almost in every community across the country national set-up employing Ugandans. Supplying grains to the World Food Programme, also fruit juice plants.

Sacco is for an individual or for three to four persons, Sacco have not generated mass employment and tend to have a short-life cycle. It is difficult to raise tax revenues in informal sector. In conclusion, a prosperous economy is one whereby, persons fill the state’s tax revenue coffers; consume services, and products in that country.

Mr. Caxton Kasozi-Batende is a legal practitioner and domiciled in the United Kingdom.

Bring your voters to order or I disqualify you, Tanga Odoi warns Kabasharira 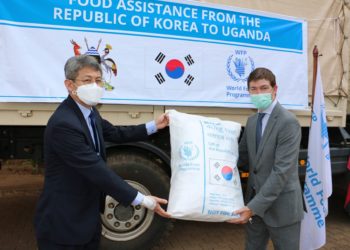