KAMPALA – Health Minister, Dr. Jane Ruth Aceng and World Health Organization (WHO) Representative Dr. Yonas Tegegn Woldmariam have in a joint travel advisory issued on Friday, July 5 confirmed that there have not been any new cases of the Ebola virus disease reported in Uganda since the previous death in Kasese district last month.

Currently, both the health ministry and WHO noted that there are no people under follow-up which means that Ebola transmission in Kasese district has been effectively contained by the country’s disease response mechanisms.

The advisory says that as of July 4, all people who directly or indirectly came into contact with the confirmed EVD patients completed the mandatory 21 days of follow-up without developing any signs and symptoms of the disease.

“All the contacts have not shown any symptoms of Ebola to-date and that all the 14 suspected cases tested negative for Ebola Virus Disease,” the advisory reads in part, noting that the country is safe and that all nationals and international travelers are free to travel to and within the country. 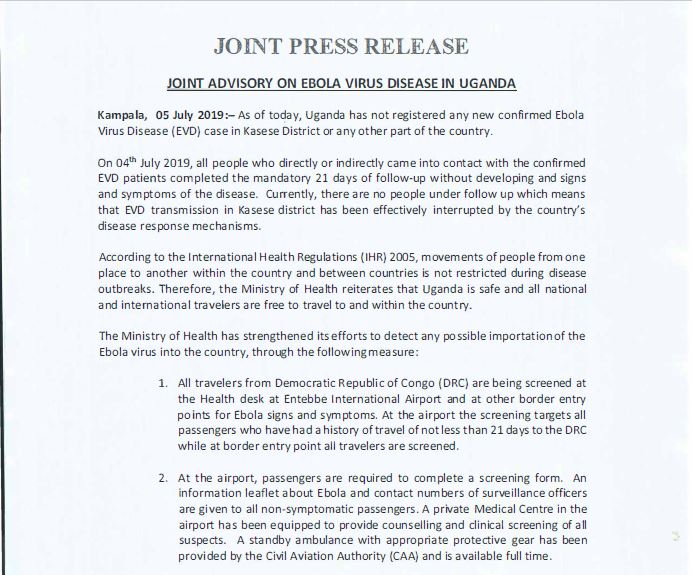 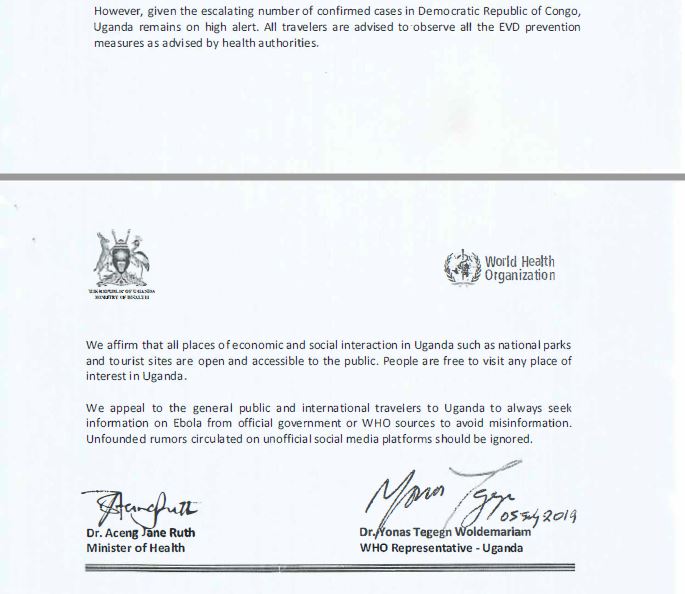 The Ministry of Health has also strengthened its efforts to detect any possible importation of the Ebola virus into the country, as all travelers from DRC are being screened at the Entebbe International Airport’s Health desk and at other border entry points for Ebola signs and symptoms.

The ministry says screening targets all passengers who have had a history of travel of not less than 21 days to the DRC while at border entry points, all travelers are subjected to intense screening.

“We affirm that all places of economic and social interaction in Uganda such as national parks and tourist sites are open and accessible to the public, the statement adds, appealing to the general public and international travelers to Uganda to always seek information on Ebola from official government or WHO sources to avoid misinformation,”reads an excerpt from the statement.

Meanwhile, WHO says the outbreak of Ebola virus disease in North Kivu and Ituri provinces of the DRC continued with steady transmission intensity this week, warning Ugandans and other travelers to remain vigilant.

It said the current hotspots are the DRC’s health zones of Beni, Mabalako, and Mandima, with some cases being exported from these hot spot areas into unaffected health zones.

A team of Ebola vaccinators was dispatched from Kasese district to beef up the vaccination of the front-line health workers in Arua and the neighboring districts.

She says it is important that the districts along Uganda -DRC border especially Arua, Maracha, and Yumbe among others to mobilize and sensitize the communities about the latest Ebola threat from Congo.