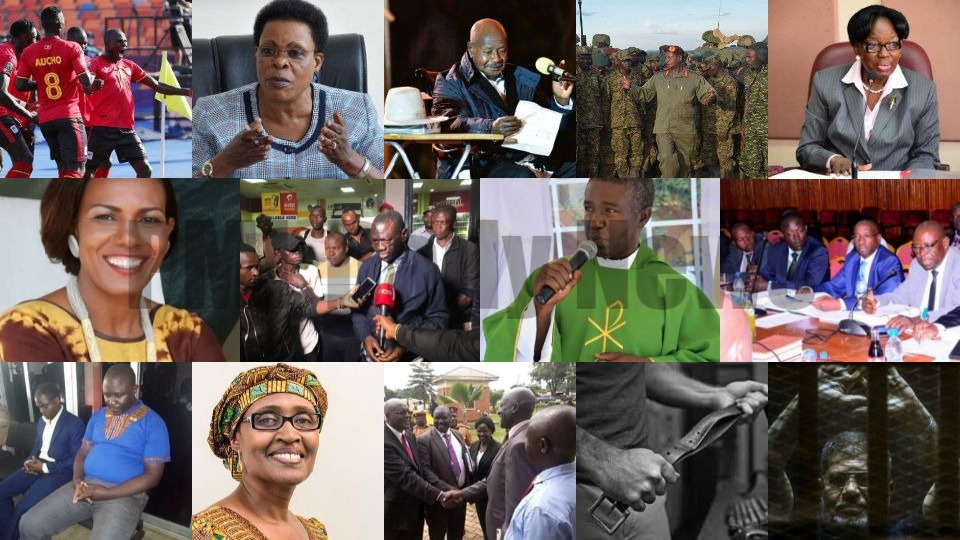 KAMPALA – Capping an eventful week, two armed suspected robbers were put out of action Saturday evening June 22, in a fire exchange with police at a fuel station owned by Dr. Kizza Besigye in Nsambya, near Kampala.

Police spokesperson Fred Enanga said detectives from the Flying Squad Unit had deployed at the fuel station after receiving intelligence of an impending robbery.

Police confirmed that the robbers were planning to rob an unspecified amount of money at the fuel station.

Speaking to journalists, Dr. Besigye said the two were shot by security officers in civilian attire as their vehicle was being fuelled by the pump attendants.

Meanwhile, two Bank of Uganda officials ended up in Luzira prison, remanded for their role in the currency scandal, an item on the news agenda that rocked the already fledging credibility of the Central Bank.

Mr. Francis Kakeeto, the regional currency manager, Mbale and Mr. Fred Wanyama the assistant regional manager Kabale were on Friday, June 21 charged with abuse office and corruption before the Magistrates Court at Kololo presided over by Mr Abert Asiimwe.

The two officials supervised the loading of the cargo, now shrouded in controversy will return to court on June 26, after they denied the charges, whose offences attract a maximum sentence of seven years in jail.

The currency scandal had by the weekend sucked in other arms of government with Speaker of Parliament Rebecca Kadaga ordering the ministry of finance to conclusively explain the matter in one month.

Meanwhile, Parliament’s Committee on Commissions, Statutory Authorities and State Enterprises (COSASE) has also indicated it will summon all parties mentioned in the currency saga, with a view of commencing a full-blown investigation.

Mr. Kagame told a Belgian daily newspaper the TAZ, that despite the two neighbouring countries enjoying historical cordial relations, Uganda is now a bad neighbour with no respect to Kigali as a sovereign state.

Mr. Kagame alleged that Uganda has continued to provoke his country by arresting its citizens without justification.
Meanwhile, famous blogger Titus Seruga accused Mr. Kagame of plotting a move to assassinate him.

He claimed he was being searched for by Rwandan operatives on orders of Rwandan President who was in Belgium on an official visit.

The blogger who is on the run from both Uganda and Rwandan governments for allegedly leaking classified top secrets alleged that Rwandan authorities had sanctioned a directive to have his life ended for leaking credible army secrets.

Back home, investments minister Evelyn Anite shocked the nation as she revealed that government has no control over the management of Uganda Telecom Limited (UTL) and that there is no records of the company’s revenue and disbursements for a very long time.

The revelation shocked Members of Parliament including Speaker Kadaga who raised a red flag in protest of Ms. Anite’s shocking statement before she directed her to give details of the ghost majority shareholders of the network.

The UTL has had a turbulent recent past, which forced Parliament to form a Select Committee that conducted a probe and recommended the government to capitalise the firm and offer more shares to a financially capable company and also set aside the then administrator.

Also in the same week, Jinja Police says they are investigating circumstances under which a pharmacist at Kiruddu hospital in Kampala ended his life.

According to Police, Richard Olaja (27) died on Saturday morning with interim reports that he dosed himself with a yet to be identified substance.

Olaja was one of the medics captured on camera in the NBS investigative story titled “Stealing from the sick” which unearthed the rot in the medical world including the illicit sale of government drugs on the black market.

He, however, in a suicide note to his mother, Olaja denied he had been involved in the illicit sale of government drugs, claiming that he had been set up by a friend who he warned to stay away from his funeral.

In sports, Uganda Cranes produced an early Africa Cup of Nations shock as they beat the Democratic Republic of Congo 2-0 in Cairo on Saturday, their first victory in the tournament since 1978.

The Cranes managed just a solitary point in 2017, their only other tournament appearance since the 1970s, but against DR Congo they looked a force to be reckoned with and deservedly ran out comfortable winners.

Despite having the more established talents, DR Congo were second best throughout the first half, going behind early on to the dangerous Patrick Kaddu and then having the frame of the goal come to their rescue just before the break.
Emmanuel Okwi made it 2-0 just after the restart and from there the Leopards never looked like clawing their way back, while the Cranes soar to the top of Group A, ahead of Egypt on goal difference.

In foreign news, Mohamed Morsi, Egypt’s first democratically elected president, was buried in a closed funeral Tuesday, a day after his death inside a Cairo courtroom triggered calls for a probe into whether he had received adequate medical care in prison.

The 67-year-old Morsi was interred in a cemetery in Cairo’s eastern enclave of Nasr City, after Egyptian authorities refused to allow his family to bury him in his family’s graveyard in the Nile Delta province of Sharqiya, his son Ahmad Morsi said in a Facebook post.

The family attended funeral prayers in the mosque of the capital’s Tora prison, where they washed and shrouded his corpse and performed other traditional rites, Ahmad Morsi said.

Afterword he was buried, in a ceremony only attended by family members, under heavy security.

Egyptian security agents prevented reporters and photographers from attending the funeral and barred journalists from travelling to Morsi’s village.