“Our Signatures have been finally verified. You know where to be on 3rd November 2020 ? Kyambogo University grounds,” Zaake said.

This brings to 10 the number of presidential aspirants who have been cleared for nomination. Others are NRM party’s Yoweri Museveni, Henry Tumukunde, Nancy Linda Nakalembe and Fred Mwesigye.

This comes after Kyagulanyi aimed a major dig at the New Vision—slamming the state run paper over consistent negative reporting and said it has been reduced to a propaganda tool by the regime.

This was over the newspaper’s headline for Wednesday, 28 October 2020, which indicated that Bobi Wine’s signatures were being questioned.

“Ever since we declared our intention to challenge [the incumbent president] Gen. Museveni, the New Vision will go to any extent to look for a negative story to write about us on a daily basis,” Bobi Wine wrote. 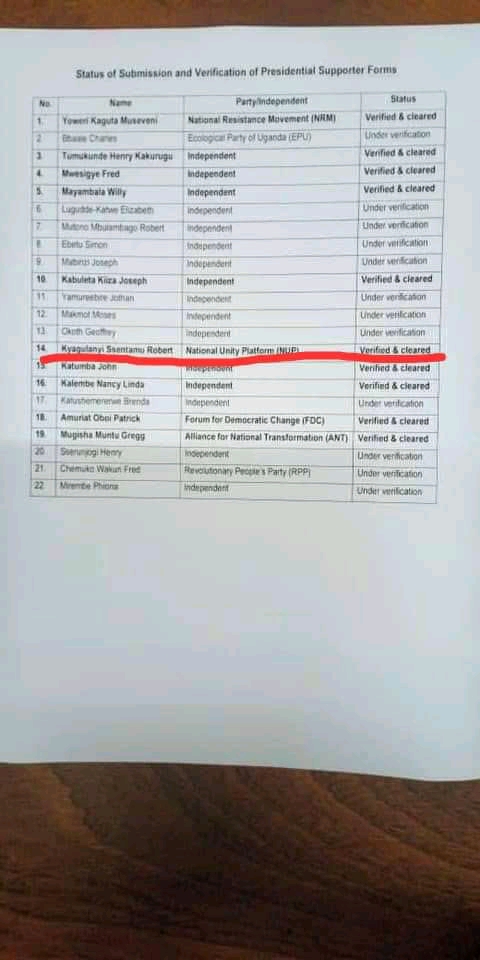 “A few weeks ago, they wrote a bogus story about the bogus court case and showed that we were most likely going to lose the case! Their intention of course was to discourage candidates from running under NUP”

Security forces in Uganda last month raided the offices of Bobi Wine, as tensions rise months ahead of presidential elections in January.

Soldiers and police officers invaded the headquarters of NUP in Kamwokya, a suburb of Kampala and seized cash, posters, banners and quantities of red berets –Bobi Wine’s signature headgear and a “symbol of resistance” which the government says is illegal.

Grief as female police officer dies in her sleep