SSEMBABULE – President Museveni, also chairman of the ruling NRM party has summoned a meeting of all party candidates in Ssembabule on Thursday September 10.

“Transport refund and accommodation arrangements will be handled by State House,” Mr Kabuye wrote in a September 7 letter.

The development comes at the backdrop of the suspension of elections in two of the constituencies in the district by the NRM Electoral Commission after escalation of violence between supporters of the opposing NRM camps. 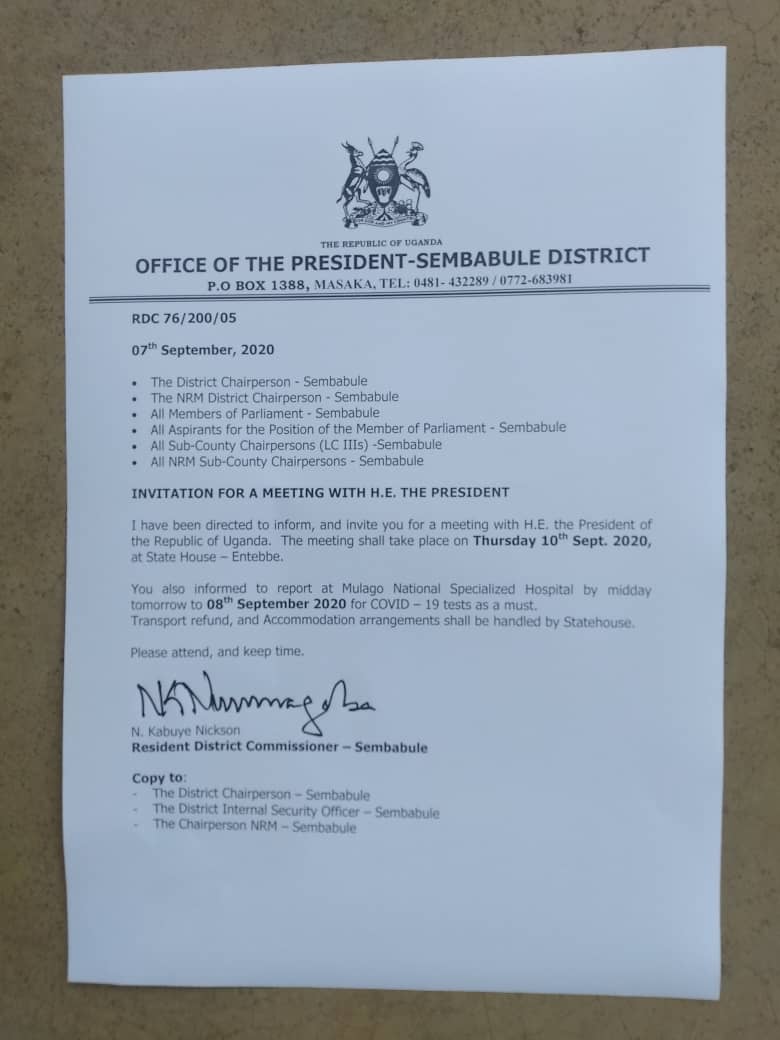 In Mawogola West, escalation of violence was precipitated between supporters of the current MP, Joseph Ssekabiito Kitayimbwa, who has been taken on by Anifa Kawooya, the district Woman MP. Ms Kawooya was injured in the violence.

The Ssembabule NRM primaries have been a hotbed of violence with the Lwemiyaga poll pitting Minister Joy Kabatsi against Theodre Ssekikubo causing tensions.

Mr. Ssekikubo won the Friday polls but Ms Kabatsi has contested the results.
The tensions forced the deputy Inspector General of Police Maj. Gen. Sabiiti Muzeeyi to rush and camp in the area.

In the run up to the primaries, the camps of both Ms Musherure and Mr. Kaguta, last week fought at Lugusuulu Subcounty headquarters in Sembabule district with each camp accusing the other of trying to fix new names into the NRM party registers for selfish gains.

The NRM candidates who had converged at the Subcounty hall in a meeting organized by the Sembabule district NRM party registrar Mr Godfrey Katokozi to attend to allegations of infighting within the NRM camps did not wait for the meeting to end when Ms Shartsi Musherule raised a complaint against Mr Godfrey Aine Kaguta and his supporters whom she accused of trying to find ways of rigging the NRM primary election using the registers.

The situation worsened when Mr Godfrey Aine stormed the meeting and accused the registrar of failing to officially invite him at the meeting.

The clash left several supporters injured as police was rendered powerless in a meeting that had Special Forces soldiers guarding some of the candidates.

Ssembabule District NRM chairperson Mr. Sam Kutesa in an interview with the Daily Monitor blamed the chaos on one of the candidates Mr Godfrey Aine Kaguta claiming that Kaguta has failed to master the art of conversing for support.