Why are MPs travelling with the DAPCB Executive Director to Canada, UK in Departed Asian properties probe?

KAMPALA – A select task force by the parliamentary Committee on Commission, Statutory Authorities and State Enterprises (COSASE) purportedly investigating circumstances under which departed Asians properties that were fully compensated for by the government ended up in hands of individuals and companies.

In the second and last part of our investigative series, PML Daily‘s NELSON MANDELA looks the issues surrounding the MPs controversial trip to Canada and the UK, in disregard of a Constitutional Court petition challenging the process.

Can the alleged compensation for these properties be traced to the intended registered proprietors?

There are three categories of Asians that were supposed to have been compensated; the compensation was only in respect of movable assets as land, as well as buildings beyond ten years, were valued for compensation. Clearly the properties which were repossessed were not compensated for.

Asians of undetermined nationality: As of 1977 following an agreement between the government of Uganda and UNHCR, these were to be paid a total of Ug. Shs. 40,509,996/56= (forty million five hundred nine thousand nine hundred ninety-six and fifty-one cents only). The payment was to be in 21 installments over a period of 11 years. However, only the first three installments were of 5,509,966/51/= were made and no further payments were made.

Did these payments reach the intended recipients?

If the compensation was majorly for movable assets other than immovable real property like land, then what compensation is the COSASE referring to? Only the 19 elderly British Asians can be confirmed to have been compensated for real immovable properties.

Travel to Canada and UK! 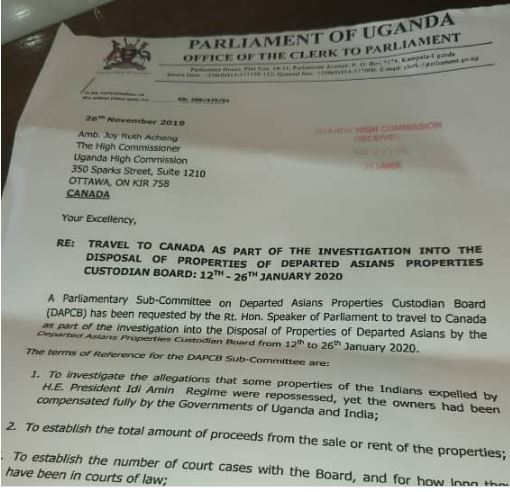 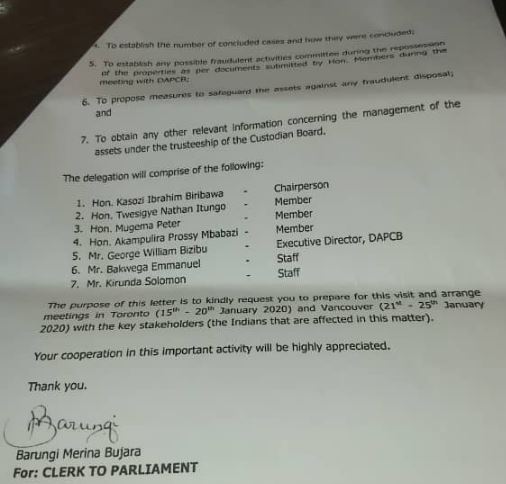 Some members of the COSASE Sub-Committee are planning to travel to Canada apparently to verify information concerning repossessed properties and the alleged compensation.

There is no better example to the old saying that history repeats itself than what is happening now! In the early 1970’s just before Idi Amin expelled persons of Asian descent from Uganda, there was a citizenship verification exercise whose motives were not known but at the end of it all the expulsion was the result. The current probe is a move to reverse the repossession exercise.

The selected members are also travelling with the instigator of the probe — George William Bizibu, Executive Director,  DAPCB. He is not a member of parliament, he is not on the COSASE and/or Sub-committee and above all he is the accuser. Does he run another office of the Departed Asians’ Property Custodian Board in Canada?

The “accuser” is travelling with what is clearly the “panel” of judges in this probe. So the “accuser” is clearly in bed with the “judges”. Is the probe and/or any recommendations that will be made thereafter be fair to the targeted Asians? The answer is a definite no.

The above notwithstanding, some of the Ugandans of Asian descent being targeted by the probe have petitioned the Constitutional Court challenging broad day light abuse of human rights and inconsistent actions of the COSASE, the Departed Asians’ Property Custodian Board and George William Bizibu in his individual capacity. According to the petition, a group of Ugandans of Asian descent are seeking orders to put an end to the COSASE probe terming the inquiry as an abuse on powers of the judiciary.

The petition, filed before the Constitutional Court last year,  awaits hearing but has ben ignored by the committee.

Key among the issues the group raised is that the COSASE probe is merely targeting is solely based on their race, colour and ethnic origin and also questioned Parliament’s sudden interest in Asian properties despite the fact that the Legislative body has no proprietary interest in the repossessed property saying the decision contravenes sections in the constitution.

The petitioners castigated Parliament for singling them out as a specific category of Ugandans citizens of Asian descent who repossessed, manage, purchased and or inherited private property for dispossessing and cancelling their certificates of repossession and titles while leaving out persons of other nationalities who similarly reposed or purchased repossessed private property contravenes the constitution.

The team also protested the move by Parliament to reverse the repossession exercise, selling off properties and the Board continuing to hold out to be the land controlling authority the body mandated to take over the remaining unclaimed expropriated Asian properties which the Minister appointed by gazzetting which extinguished the Board substratum and the inaction of the Uganda Land Commission is inconsistent with articles 91(1), 92,155(1), 154(1), 238 and 239 of the constitution.

The group also accused Parliament of trying to usurp powers of judiciary stating that there are existing judicial court judgments on who has powers to investigate fraud and to cancel a certificate of repossession by initiating or conducting repeated hearings on the legality of certificates of repossession and allegations of fraud, saying the current probe interferes with judicial independence which is inconsistent with and or in contravention with the constitution.

They argued that Parliament ignoring existing court judgments on expropriated properties amounts to the institution’s attempts to amendment judgment which they say denies them court protection and whittles away their right to own private property and is inconsistent with the constitution.

So, the whole intention of the probe is clearly mischievous and only intended to instigate another expropriation of private property. It is targeting small group of Ugandans of Asians descent with intention frustrating their businesses as property managers, possibly extorting money from them through harassment and publicly embarrassing them with unfounded accusations and above all reversing the repossession exercise.

The continued disregard of the law, legal advice from the Attorney General and decided cases by those targeting Ugandans of Asian descent and seeking to reverse the repossession exercise and deprive a certain category of individuals of their private property while hiding behind an organ of government should be condemned in the strongest terms by all including the international community.