KAMPALA — The United States of America considers Uganda’s January 14 polls not to have been free and fair.

Secretary of State Antony Blinken, while announcing visa restrictions on top Ugandan government officials who masterminded massive electoral irregularities including voter intimidation said:
“The government limited accreditation for international and local election observers and civil society, but those who were able to observe the process noted widespread irregularities before, during, and after the election, which have undermined its credibility. This electoral process was neither free nor fair”.

Museveni, who has ruled Uganda since 1986, was declared the winner of 2021 January poll with 58% of the vote against opposition leader Bobi Wine’s 35%.

Although Museveni dubbed the election the “most cheating-free” in Uganda’s history, the lead-up to the polls was marred by violent protests and a social media and internet blackout. 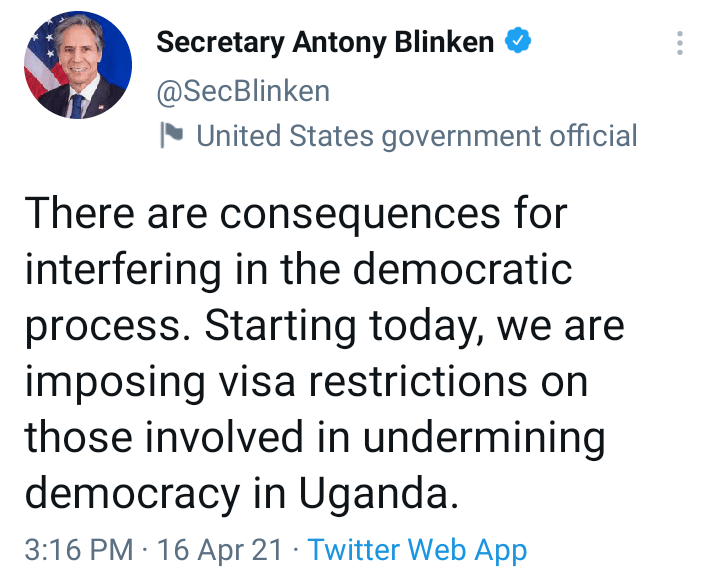 “Opposition candidates were routinely harassed, arrested, and held illegally without charge,” Mr Blinken, also pinning
Uganda security forces for the deaths and injuries of dozens of innocent bystanders and opposition supporters, as well as violence against journalists that occurred before, during, and after the elections.

The entire campaign team of Mr. Kyagulanyi was arrested towards the election in Kalangala district.

Mr. Kyagulanyi had travelled to the central district for scheduled campaigning before he was blocked by the army and police from proceeding to the campaign venues.

More than 30 of his campaign team including his chief bodyguard Eddie Mutwe were also arrested and have never been released despite applying for bail applications.

Initially, other journalists had also been arrested until a security officer who had all along been disguised as a journalist ordered their release.

The journalists were covering Mr Kyagulanyi and his personal bodyguard being besieged and led away by police.

In the statement on Friday, Mr. Blinken noted that the arrest of journalists and restrictions on civil society represent a continued downward trajectory for the country’s democracy and respect for human rights as recognized and protected by Uganda’s constitution.

The US embassy in Uganda released a statement saying the election was tainted by the harassment of opposition candidates and the suppression of media and rights advocates.

It noted “a worrying trend on the course of Uganda’s democracy.”

Ugandan authorities however accused US ambassador Natalie E. Brown of trying to undermine the elections after she tried to visit opposition candidate Bobi Wine while he was being held under house arrest.

A statement from the US Department of State stopped short of congratulating Museveni on his victory and instead drew a tougher line on the conduct of Ugandan authorities during the election process.

“We are deeply troubled by the many credible reports of security force violence during the pre-election period and election irregularities during the polls,” said spokeswoman Morgan Ortagus in the statement. “We reiterate our intention to pursue action against those responsible for the undermining of democracy and human rights in Uganda.”

International observer missions were conspicuously absent from polls after Ugandan authorities failed to accredit the missions, or implement recommendations from past missions.

Ahead of the election, a coalition representing hundreds of Ugandan civil society organizations said out of 1,900 accreditation requests, the government only granted 10.

Uganda’s election commission also rejected the European Union’s offer of monitors even though the EU had previously observed three elections between 2006 and 2016.

“The excessive use of force by law enforcement and security agencies has seriously tarnished this electoral process,” Borrell said.