KAMPALA – Uganda Tourism Board (UTB) joined the rest of the world in celebrating the International women’s day under the theme Women in leadership: achieving an equal future in a covid 19 world through its current digital campaign dubbed Take on the pearl with love.

A group of six women were flagged off on 5th March, 2021 from the Talent Africa offices in Kamwokya amidst excitement and jubilations as they boarded the van and set off to MurchisonFalls National Park, Uganda’s largest and oldest conservation area, hosting 76 species of animals and 451 birds.

The group checked into the hotel late in the evening and thereafter concluded the day with an outdoor dinner, under the stars, at Sambiya River Lodge in Murchison Falls National Park.

“The first day was fun as I have never travelled this far from home so I kept on looking at the scenery a long the way, am tired but excited about the long weekend ahead,” said Aminah Nakakande, one of the friends to the winners. 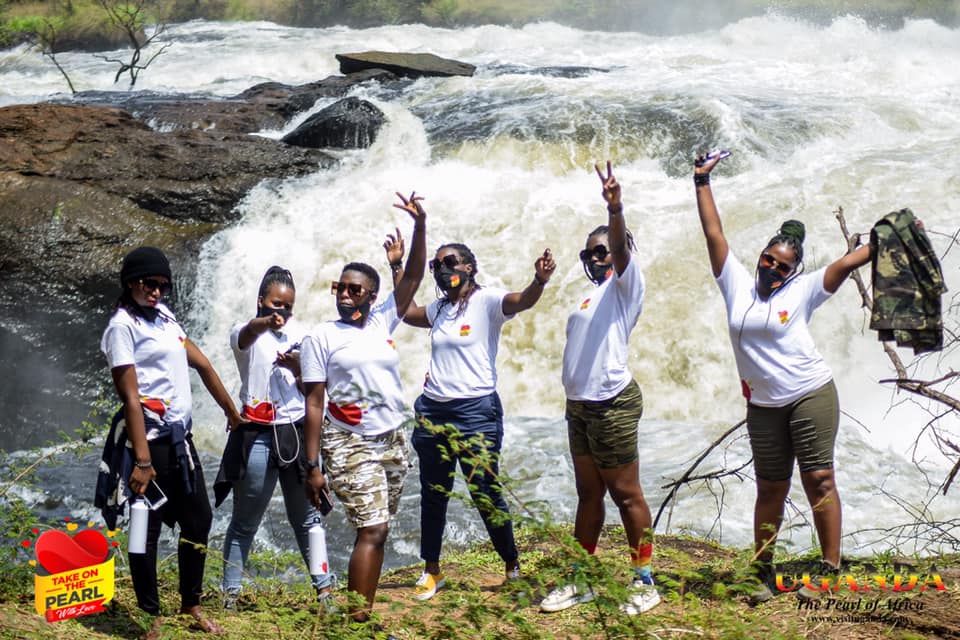 On 6th March, 2021, the group of women started the day with breakfast at Sambiya River Lodge followed by a morning game drive in the southern bank, swimming, relaxing and taking nature walks followed by a boat cruise after lunch and a candle lit diner at night.

“When they told us that we were going for a game drive, I did not know that we were going to see the animals up close, I even feared that the lions could come close and eat us but the game rangers were so nice and assured us they wouldn’t. I have a lot to tell my family when I return back home,” Joan Hiring continued to explain as she talked about her day.

Murchison Falls, which is one of the places that were visited on day 2 is also known as Kabalega Falls, is a waterfall between Lake Kyoga and Lake Albert. At the top of Murchison Falls, the Nile forces its way through a gap in the rocks, before flowing westward into Lake Albert.

The third day of the trip was highlighted with a picnic in the wild and open discussions about women given that it was a women’s day weekend.

The goal of this picnic was to let these women discuss about some of the challenges that they face as women and how they have overcome them as well as devise means on how to help women out there who do not have access to this information.

“As women we go through a lot, these days we are both the mothers and fathers since men have neglected their roles in a home. I am therefore very grateful to UTB for bringing me on such a trip because I would never have afforded it, thank you so much. This has been the highlight of my year so far,” Tamarah Nanfuka one of the winners of the trip exclaimed as she gave details about the picnic they had.

“March is internationally recognized as a women’s month, and this is the same for us as UTB, we would like to use this month to appreciate the mothers of the nation. Therefore, using our current digital campaign Take on the pearl with love to do this is a bonus for us, am glad that the participants for the 3rd trip have enjoyed themselves and we look forward to more winners,” said Claire Mugabi the Marketing Manager UTB
Day 3 of the trip ended with performances from Dance Master Academy of Northern Uganda who performed the Bwola dance, Dingi-Dingi, Laraka – Raka and Ajere dance.
And of course, our winners couldn’t resist the urge to join in!
The winners’ trip was concluded on Monday 8th March, 2021 as they set off from Heritage Safari lodge at 11am and headed back to Kampala.