KAMPALA — The Commercial Court has dismissed the case in which the proprietors of Simbamanyo Estates Limited had sought to halt the auctioning of its prime properties in Kampala which was meant for Equity Bank Limited to recover outstanding loans worth $10.8 million (about Shs40 billion).

Deputy registrar Lillian Bucyana has on February 17 dismissed the matter citing that “the suit abates for failure to take out summons for directions in time”.

Earlier, Justice Christopher Madrama ruled that Simbamanyo Estates did not present to court acceptable grounds for court’s consideration to deny the bank legal costs incurred.
“…the respondent (Equity Bank) upon being served, instructed lawyers and the lawyers took action to oppose the application by filing the appropriate affidavits in reply, as well as written submissions,” he ruled.
He condemned the applicant to costs.

Justice Madrama ruled that stopping the sale would have infringed the Bank’s right to be heard and also inconvenienced those who prepared for the auction which was advertised on September 8 fixing the sale date. 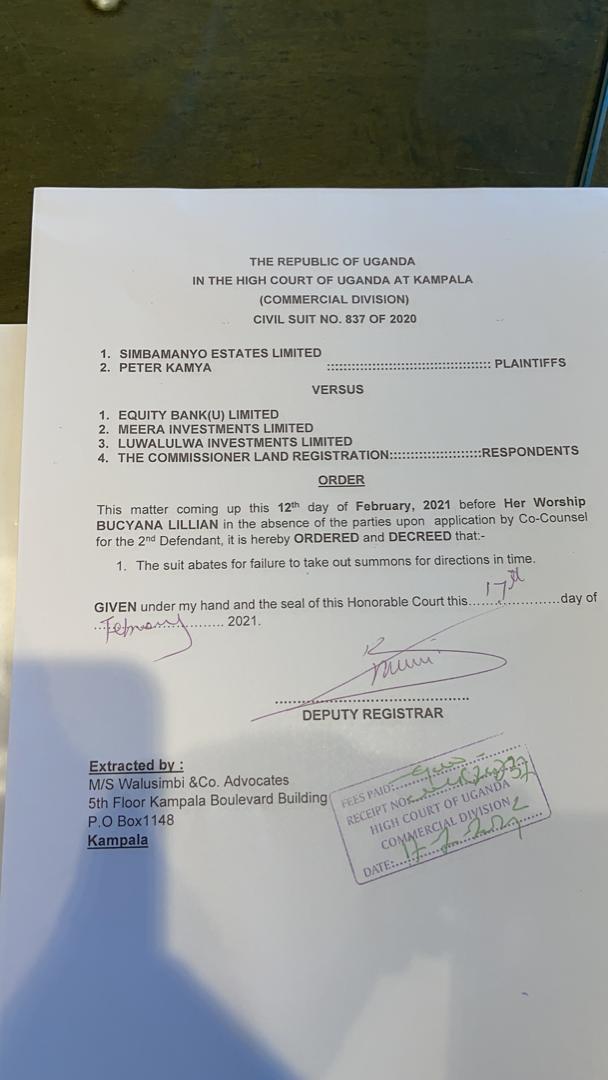 “The application for withdrawal was not conceded to unconditionally but was on condition of payment of costs. In the circumstances therefore, the applicant (Simbamanyo Estates) application stands dismissed upon withdrawal and the only issue for consideration is whether should be payable,” Justice Madrama held.

On October 8 last year, Simbamanyo Estates Limited filed an application seeking for express orders to stay the sale of its properties which took place on the same day.

Court records show that on the same day, the bank sold Simbamanyo building housing among others the ministry of gender on Lumumba Avenue and Afrique Suites Limited, a four-star hotel at Mutungo Hill, Nakawa Division on the same day.

Justice Madrama’s decision followed Simbamanyo Estates Limited’s notice of withdrawing the application with no order to costs which Equity Bank lawyers of AF Mpanga conceded to the withdrawal but demanded for the legal costs incurred.

Simbamanyo Estates Limited had petitioned the court to stop the sale and takeover its properties until determination of its appeal challenging the order for payment of 30 percent of the outstanding loan.

The two properties, Simbamanyo building and Afrique Suites in Mutungo Hill were staked as collateral when Simbamanyo Estates Limited was acquiring the disputed loan.

The High Court, Commercial Division has since dismissed pleadings in which the proprietors of Simbamanyo Estates Limited had sought to stop the sale.

The properties were guaranteed to Equity Bank Uganda as security to get the loan in November 2017.

Simbamanyo Estate Limited through their lawyers of Muwema and Advocates had sought to halt the intended sale.

The bank advertised the sale of the two properties by way of public auction. The advert for sale of the mortgaged properties seeks to enforce the disputed credit facility advanced on November 30 2017.

The Estate sued Equity Bank Uganda and its counterpart in Kenya challenging the legality of the outstanding loan. The case is pending hearing and determination before the Commercial Division of the High Court.

But Equity Bank Limited argued that the proprietors of Simbamanyo Estates Limited defaulted on their loan obligations when they failed to pay any money as required by the contracted signed.

According to the court documents, on June 4 the bank issued a notice of default to the company demanding payment of arrears of $398,362.33.