PADER/GULU — National Unity Platform (NUP) Robert Kyagulanyi Ssentamu has urged the people of Northern Uganda especially the youth to turnout in massive numbers on January 14 to not only vote for him but also guard the election.

He said the 2021 presidential election is not just an election but a revolutionary election because of his candidature that has thrown incumbent President Museveni into panicking including ordering reducing the campaigning period to just two months which has never been there before.

Kyagulanyi, also known as Bobi Wine was on Wednesday campaigning in Pader and Gulu but one of his rally in Kitgum was blocked by security after tens of hundreds of his supporters swarmed him.

He trolled government over the widespread poverty in Northern Uganda and said that it is one of the tools that incumbent President Yoweri Museveni is using to keep the region at bay.

He said Northern Uganda has a lot of potential and that he will immediately embark on redeveloping it after taking the office.

“We all know that the fathers and mothers of Uganda’s independence came from Northern Uganda but today, we don’t have a voice and that is why there is widespread poverty in Northern Uganda. Poverty is being used as a weapon to silence us,” he said, nothing that a poor person is very easy to control and this is how Museveni has been able to rule over us for 34 years.

“On top of poverty, they have divided us along with religious and tribal lines, but for just this time, I implore us to unite and change the status quo,” Kyagulanyi added.

He told them that it was unfair that despite being a region in Uganda, Northern Uganda including Pader continues to be massive poverty with massive land grabbing of the Acholi Land, high levels of poverty, poor infrastructures including roads, poor education, poor healthy system and poor pay for teachers compared to other regions among other inequalities. 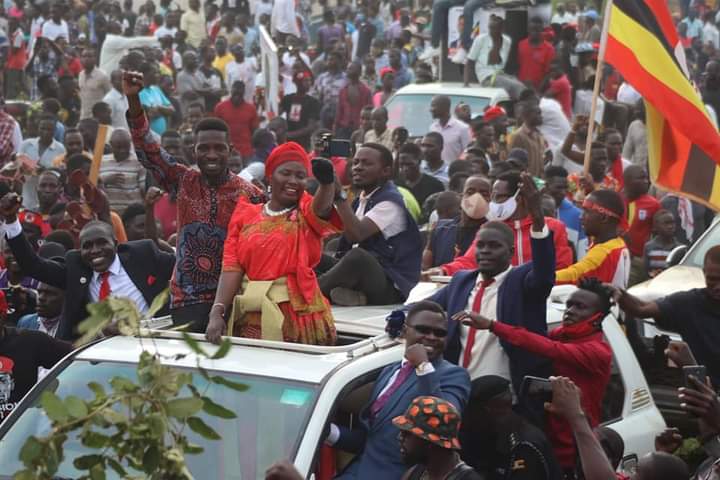 He says that once voted in power, a new age to their lives and the lives of all Ugandans will be opened and that he will be their servant unlike incumbent Museveni who claims he is not a servant to the people of Uganda.

Kyagulanyi says that he knows that president Museveni has relied heavily on the army and police to brutalize Ugandans and intimidate them, but he knows that the said officers are good people who are just frustrated by the pain they go through everyday.

He retaliated that once he becomes president, he will make their lived better by increasing their salaries with the least police officer getting at least one million shillings, their children entitled to free quality education, free quality healthcare just like senior officers among others.