At 38, Bobi Wine is half Museveni’s age.

Addressing hundreds of his supporter who overpowered police to attend the manifesto launch at Kakyeeka Stadium Bobi Wine who was in Company of his wife Berbie Kyagulanyi said:  “This is a revolutionary election.”

“The National Unity Platform is committed to working with all Ugandans to improve their lives. We believe that immediately after taking over government, every Ugandan from Kaabong to Kisoro, from Yumbe to Busia will experience meaningful change in their way of life”.

“Our promise to the youth of Uganda, we shall ensure we find meaningful employment for you.

“We want to create at least 5 million jobs. We shall invest in technology and a massive scale of industrialization.

“Our promise to all Ugandans is that we shall safeguard their land. We shall put an end to the enormous scale of land grabbing. If it is done, justice must prevail.

The people of Uganda gathered in this place and those watching us all over the country and all over the world;

Distinguished leaders of the NUP!

First of all, it is not by mistake that in observing protocol, I started with you, the ordinary people before recognizing the leaders! No, this is intended because we have told you time and again that it is our policy to put the people of Uganda first in everything we do. Our assurance is that when we take over government, which we shall soon do, the people of Uganda will for the first time in history become the bosses and the leaders will be servants!

Countrymen and women, I bring you greetings once again and I thank God for giving us this opportunity to meet here in Mbarara to launch the manifesto of the National Unity Platform. All I can say is, Ebenezer, thus far the Lord has brought us, and we believe that he will guide us into the new Uganda!

I am not saying there is no value in having a manifesto. But I want to emphasize that no matter how beautiful the ideas of any candidate in any manifesto, if there is no will from the leaders to improve the lives of the people, it will be nothing but just words. And to emphasise this point, ladies and gentlemen, just look at all the NRM manifestos since 1996.
A quick scan through their promises each election year shows nothing but lies, false promises and contradictions.
Just in the last election year, General Museveni went as far as lying to our young children. He moved all over the country promising that government would provide free sanitary pads to school-going children in order to enable the girl-child stay in school. Up to today, this promise, like very many others remains in words. When she was asked about this, Gen. Museveni’s wife, who doubles as his Minister for Education claimed that there was no money to fulfill this promise. The government has never failed to find billions of shillings to bribe MPs to pass bad laws.

But they could not find money to purchase sanitary pads for our young children so as to enable them keep in school. It will be remembered that the rate of children dropping out of school in Uganda is one of the highest in Africa and indeed the whole world.
According to UNEB figures, out of 12.2 million children who started P.1 over the past twenty years, only 6.9 million children were able to complete P.7. That is only 57%.
The drop-out rate is even much higher in the case of female children.

Here in Mbarara, 10,099 children aged between 6 and 15 years are not attending school! Over 72.9% of the people in the greater Mbarara district have only S.4 as their highest level of education.
According to UNESCO, more than half of all female children who begin primary school in Uganda do not complete!
In part, this is attributed to the lack of sanitary pads.
That a government can fail to find money to save our female children and yet find money for luxury and repression speaks of the worst misuse of public resources.
It speaks to a government which does not care whatsoever about the plight of the people! The election year is yet again upon us, and yet again, Gen. Museveni has come again with the same promises, which he has no intention of fulfilling- not now, not in the future. This is the tragedy of Uganda.

Comrades, my assurance to Uganda is that we are not merely making promises in order to win power! No.
The National Unity Platform is committed to working with all Ugandans to improve their lives. We believe that immediately after taking over government, every Ugandan from Kaabong to Kisoro, from Yumbe to Busia will experience meaningful change in their way of life. 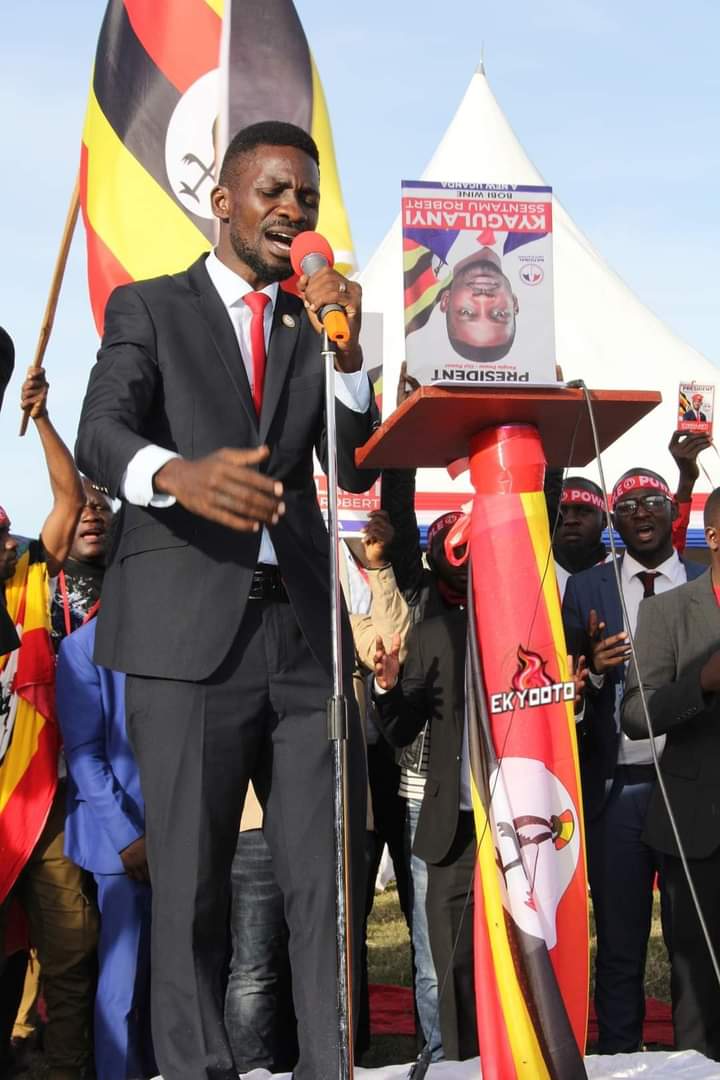 Our promise to the teachers of Uganda is that we shall prioritize their welfare. Teachers must not wait for three months to be paid a salary that is not even enough to pay school fees for their own children. Teachers should be respectable citizens. Our government will ensure that teachers earn a decent salary, that they live in decent accommodation and have access to meaningful benefits when they retire.

Our promise to the health-workers is that their work will be respected and rewarded by the government. Today, Uganda loses over 100 doctors every year who leave the country in search for greener pastures abroad.
Some even go to neighboring countries such as South Sudan, Kenya and Rwanda. The lower level health-workers are not exempted from the challenges of poor payment, lack of training opportunities, the absence of equipment in the health facilities, etc.
My own mother was a mid-wife and I understand the challenges mid-wives go through.
In some cases they have to use candles, torches and tadooba lights to assist delivering mothers. Our promise to all the health-workers is that our government will prioritise their welfare and ensure that they are paid well and on time.

Once again, let me repeat our promise for our security forces- the soldiers, police officers and the prisons officers. There is no reason why soldiers should live in dilapidated houses, in many cases without running water or even electricity.
When you look at the conditions of the police stations across the country, you wonder why these police officers, which the regime relies on to keep in power against the will of the people, are treated with so much disrespect.
About twenty years ago, the World Health Organisation called for a complete elimination of the use of asbestos because it causes cancer.
To date, police officers in our country live in old asbestos roofed houses. Of course poor housing does not only affect our men and women in uniform but all citizens. According to the Uganda Beaural Of Statistics report, 94.3% of the people in Mbarara district are not living in decent housings. Over 1000 households do not have any toilet facility!
Our soldiers, police officers and prisons officers live like beggers even when they do a lot of work. There is no fairness in promotions and deployments. In many cases, promotions and deployments are not based on merit, but on who knows who. Our promise to our men and women in uniform is that they will be paid better as soon as we are in government. We understand that some of our pledges will take some time to implement, but our promise to pay a minimum of 1 million shillings to the soldiers and police officers will take immediate effect.
This is because that money is available, and we know it.
We shall get all that money stolen in form of classified expenditure and use it to improve the lives of these men and women who keep awake at night to keep us safe. I have said it before that the majority of our police officers and soldiers are good people and decent citizens.
Even when they are sent to beat and kill us, many of them do not like beating us. Therefore, we must commit to improve their welfare and in turn demand them to respect the rights and dignity of the citizens.

Our promise to ordinary citizens who work in the informal sector is that your work will be valued and rewarded. Those who ride boda-bodas, the taxi drivers, the mechanics, ordinary businessmen and women, the house-maids, industrial workers and other categories, the principle must be that if you work hard, you must earn from your labor.
As the Banyankole say, ebirungi biruga omu tuutu. (Hard work pays) We shall stop the witch-hunt of private business owners who are persecuted for real or perceived opposition to the government in power.
We shall ensure that the taxes imposed on businesses are reasonable and once collected, those taxes must be put to the right use.

Our promise to the mothers of Uganda is that you will never again feel unsafe giving birth in a Ugandan health facility.
As we have pledged, we must have a maternal health facility at every sub-county in Uganda so that mothers do not have to move miles to access a mid-wife. Here in Mbarara, more than 15% of the households are more than 5 kilometres away from a health facility!
We will be guided by the Maputo Protocol and the Abuja Declaration and we shall invest heavily in healthcare, specifically targeting women and children.

Our promise to the local investors is that we shall treat you the same way as we treat foreign investors. In this way, domestic innovation projects will be supported with business accommodation for a limited period. They will get tax waivers and energy subsidies.
Uganda is full of young talent. We shall focus on promoting this expertise in our midst by investing in skilling programs for young people, and deliberately finding opportunities for them to practice their skills. To increase access to capital, the National Unity Platform shall begin the process of facilitating the setting up of trust funds. Beneficiaries of this will be secondary school students and early school leavers. Investment trust funds can be banked and invested domestically or overseas. In this way, we shall promote a savings culture and promote entrepreneurship.

Our promise to the farmers is that we shall focus on sourcing for the right in-puts, encourage and support cooperative unions for farmers. We shall source for regional and global markets for Uganda’s agricultural products, and we shall strive to make our products competitive on the world market.
In that regard, I stand here mindful that the people of Mbarara and Ankole generally, whose lives largely depend on farming have in the recent years faced many problems including fake drugs and pesticides, low prices for their milk and Matooke etc
Many farmers have lost cows, while those who specialize in crop production have been disadvantaged in many ways. We must be more innovative and change the the way things are going.

A vote for NUP is an assurance that citizens will never be persecuted for disagreeing with the government.

In a nutshell ladies and gentlemen,
A vote for NUP is a vote for a renewed commitment to the dignity of all citizens of Uganda.
For the respect of fundamental human rights.

For the recognition that all citizens are equal before and under the law.
That will be a new Uganda for us. A Uganda In which citizens are free to enjoy their God given rights and freedoms.

He is the true definition of hard work! Bebe Cool and wife Zuena elated as son makes U-20 national team debut