NAIROBI – 9th October 2020 marked Uganda’s 58 years since it got its independence from the British Colonialists. Its the day when Ugandans celebrate political, social,cultural, economic transitions and freedom since 1962.

This means that we can take our own decisions pertaining to the good of our motherland,her people and also choose our own leadership legislation through a streamlined democractic governance structure. This year’s theme was; “Celebrating Uganda’s steady progress towards ??economic take off and self-sustaining economic growth”.

Being a member of Ugandans Friends connect platform a Ugandan WhatsApp group for Ugandans studying, living and working in Kenya, one feels a sense of belonging. The members provide such a support system ranging from social, to financial, security among other aspects of life. It’s a family that one can ably and reliably lean onto.

As we approached Independence Day, Mutesi Nandy and I were selected to take lead in organizing for the day’s celebrations; a thing that came with many challenges (I am new in Nairobi whereas Nandy was new to the group or platform). Nevertheless we were up to the task with such enthusiasm as we saw this as an opportunity to spread our wings as far as our organizational skills were concerned. Our task was not only to reach out to as many Ugandans in Kenya as possible that is, beyond the WhatsApp group but also to lobby for support where possible. I went to the Intonations platform and started reaching out to Ugandans and honestly I was not disappointed. I reached out to more people than I had initially thought I would.

As we approached the D-day though, I realized that around 80 members had confirmed attendance but to our utter surprise, over 300 guests participated in the days events, some clad in branded jerseys, children dressed in our Ugandan flag colors, and of course the emotional bit was singing our National and East African Anthems as a family in a foreign land. We enjoyed Ugandan Cuisine, some people were heard saying Ekyenyajja mubinyebwa literally meaning smoked fish in peanut paste, our well streamed yellow Tooke was a craving for many, the smoked gravy beef and lots more to drink. Food was in plenty and people enjoyed tasting their own food in a place far from their own homes. Did i say that we enjoyed Ugandan music too?. We danced to Mesach Ssemakulas Njagala Nyimbire Omutanda to the famous Teso Email song, not forgetting the south African Jerusalema dance challenge !

We had Ugandan market of some sort commonly known as a mudaala selling Ugandan bikooyi dresses, suuka, ugandan flags, lesus, bags, masks designed in ugandan colours,( some branded according to the days theme), bracelets, arm wrist bands etc. and you should have seen how ladies especially were fighting to at least take an item back home! 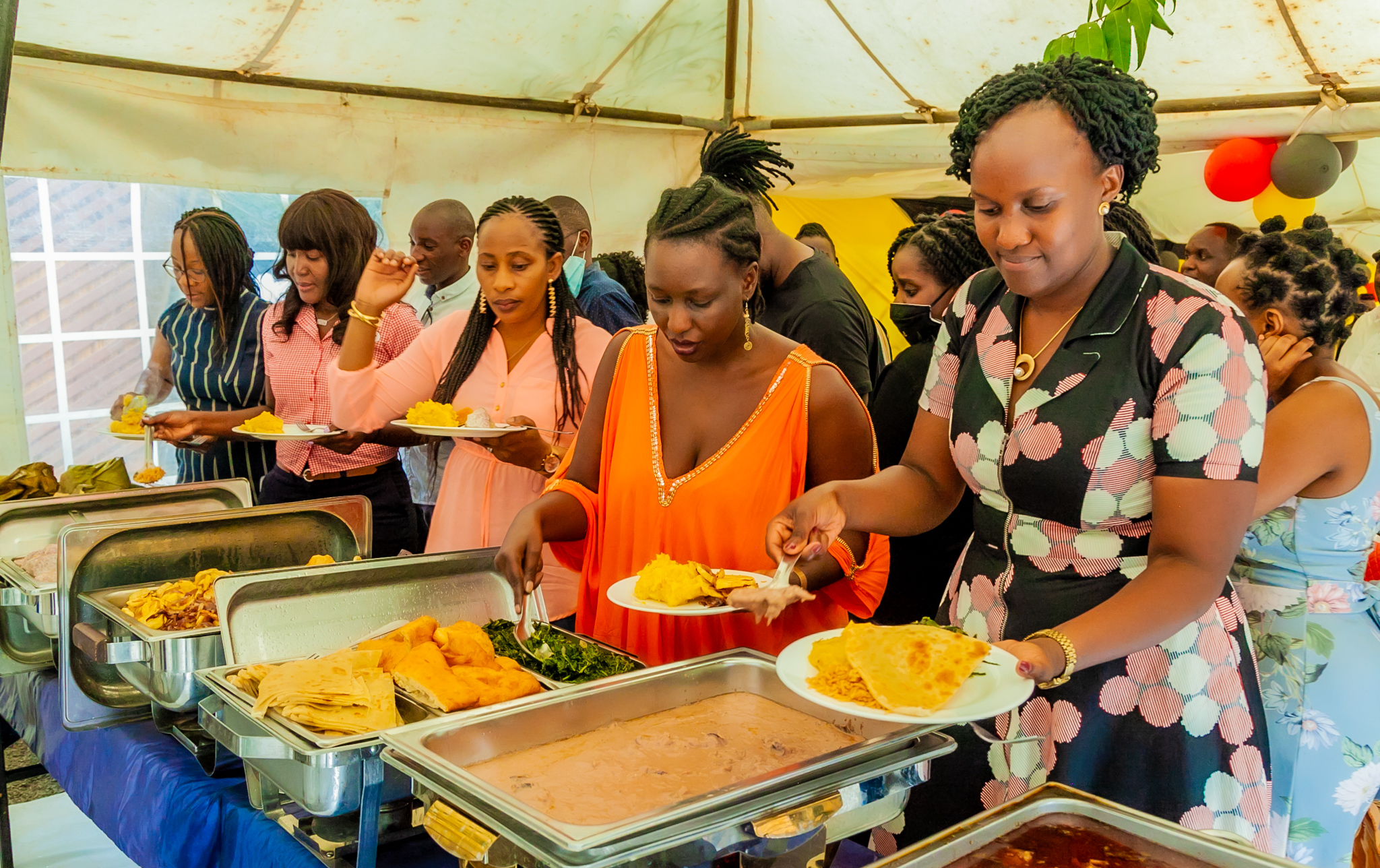 We had two cakes: one for the day and another for the September and October born babies.

It was such an eventful day that by 10:30pm more people were still coming through (a friend bringing a friend kind of chain).
Celebrating Independence Day in the diaspora not only provides an opportunity to meet but also show solidarity, unity, love, Ubuntu spirit and Patriotism for our Uganda.
The Uganda High commission was represented by Ms. Jacqueline Wagyona Banana, the Head of Chancery. She was accompanied by Ms. Evelyne Namatende the Administrative attaché. Ms.
th? ?
Banana congratulated the Ugandans upon the 58 Independence Day celebrations and encouraged all Ugandans to embrace and work towards this year’s theme Celebrating Uganda’s steady p rogress towards economic take off and self-sustaining economic growth”. Ms. Banana expressed appreciation for the cooperation between the High Commission and the Ugandans living in Kenya. ?She pledged that the embassy will strengthen its cooperation with Ugandans in Kenyan. The High Commission in Kenya contributed to the costs of the day and this was a great sign of belonging, unity and Identity. On behalf of the organization committee we do appreciate the High Commission for providing financial support towards the daily expenses and for their physical absence. ?This automatically strengthened the relationship between Ugandans and the High commission.

I would like to urge my fellow Ugandans to embrace the independence we have and use it to forge a way forward for better Uganda or the Uganda we envision. The future of Uganda lies
the decisions we make today;let’s make wise decisions Uganda we lay our future in thy hand.

Grief as female police officer dies in her sleep