KAMPALA — Fundraising has already begun in the wake of the fire that engulfed Makerere University’s Ivory Tower, as the Vice Chancellor Prof Barnabas Nawangwe invited friends of Makerere and alumni to work together to rebuild the structure.

Describing the Main Building as “our history” and “our icon”, the Vice Chancellor said a separate investigations team setup by University Council who are working with Ministry of Works is studying the structural integrity of the building.

Some high-profile pledges have already been made.

Prof Nawangwe said more friends of Makerere promised they would be donating to help with the “complete reconstruction” of what was lost.

According to the VC, the first donation towards the restoration of the iconic administration building came from Prof. Busingye Kabumba of Makerere Law School in the sum of UGX.1 million.

“He sent his donation on Sunday morning immediately after fire had gutted the building,” Prof Nawangwe said.

Meanwhile, the Uganda Society of Architects have also pledged to offer technical expertise in the efforts to restore the Ivory Tower to its former state.

The Ivory Tower, which is the main symbol of Uganda’s oldest university, was left in ruins by fires that broke out in the wee hours of Sunday September 20.

The building was left visibly cracked, tainted with smoke, and the windows blown out.

The Vice Chancellor said the 79 year old building is representative of “our history and education, which should be restored”. 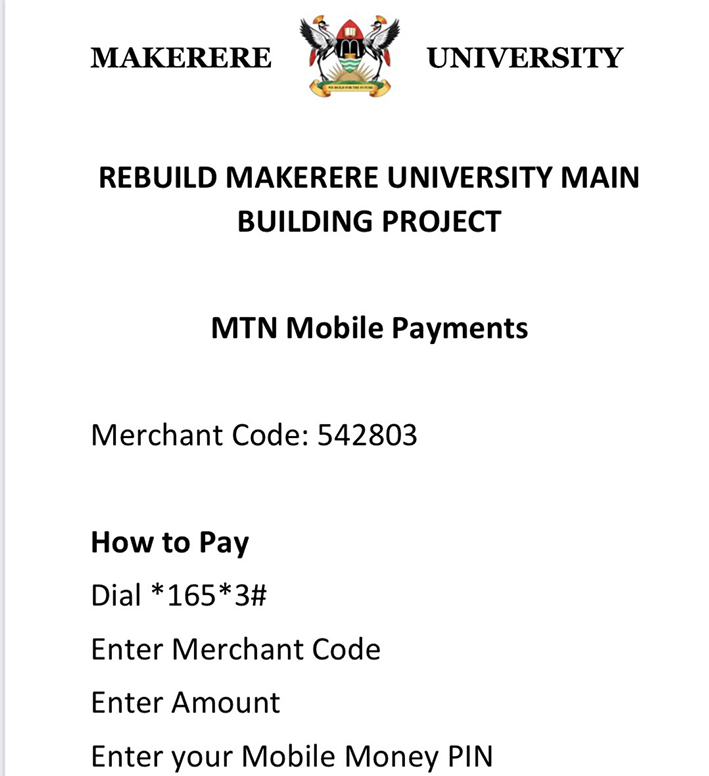 Unveiling the official contribution channels for support towards the restoration of Iconic Main Administration Building the VC appealed to all well wishers to use Stanbic Bank Accounts: 9030017778608 (USD)/ 9030017778535 (UGX) for contributions.