KAMPALA — National Unity Platform (NUP) President and Presidential candidate Bobi Wine, real name Robert Kyagulanyi has aimed a major dig at the New Vision—slamming the state run paper over consistent negative reporting and said it has been reduced to a propaganda tool by the regime.

“Ever since we declared our intention to challenge [the incumbent president] Gen. Museveni, the New Vision will go to any extent to look for a negative story to write about us on a daily basis,” Bobi Wine wrote after what he described a screaming heading headline on Wednesday that his signatures submitted to Electoral Commission have been questioned.

Bobi Wine also accused the State run paper of always twisting “our words and publish lies intended to weaken us”.

“A few weeks ago, they wrote a bogus story about the bogus court case and showed that we were most likely going to lose the case! Their intention of course was to discourage candidates from running under NUP” 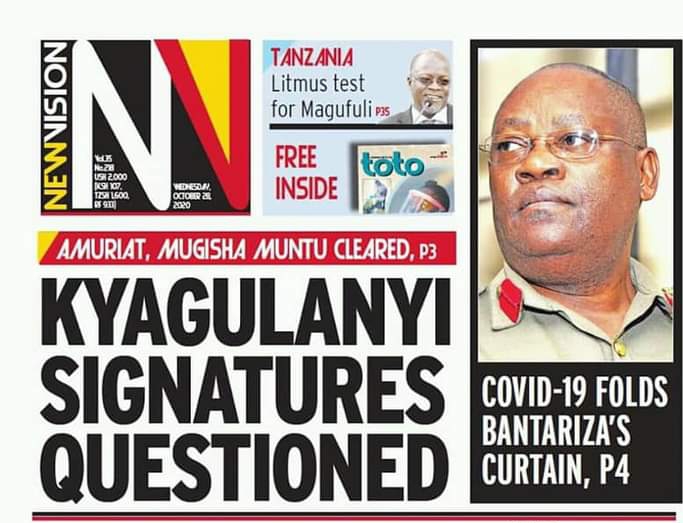 “My message to them- NOTHING, ABSOLUTELY NOTHING can stop a people’s struggle for liberation”.

Security forces in Uganda last month raided the offices of Bobi Wine, as tensions rise months ahead of presidential elections in January.

Soldiers and police officers invaded the headquarters of NUP in Kamwokya, a suburb of Kampala and seized cash, posters, banners and quantities of red berets –Bobi Wine’s signature headgear and a “symbol of resistance” which the government says is illegal.

Commentators say incumbent leaders such as Museveni, 76, benefit from powerful patronage networks, long-established political machines, control of the media and links to big business, as well as support from the military or other security forces.

Museveni has accused Bobi Wine of trying to incite rioting – a charge he also denies.