NTUNGAMO – The police have on Saturday afternoon confirmed the arrest of State Minister for Labour Mwesigwa Rukutana following a shooting incident in Ntungamo, in which a supporter of opponent was injured.

Deputy spokesperson Polly Namaye says the minister is detailed at Ntungamo police station, with three of his body guards and they face attempted murder charges, among others.

“The victim was rushed to hospital in critical condition while the suspects are in detention on charges of inciting violence, attempted murder by shooting and malicious damage,” Ms Namaye said on Saturday afternoon.

Mr. Rukutana was on Saturday morning pictured in an ugly shooting incident in which a voter was earlier reported to have died. 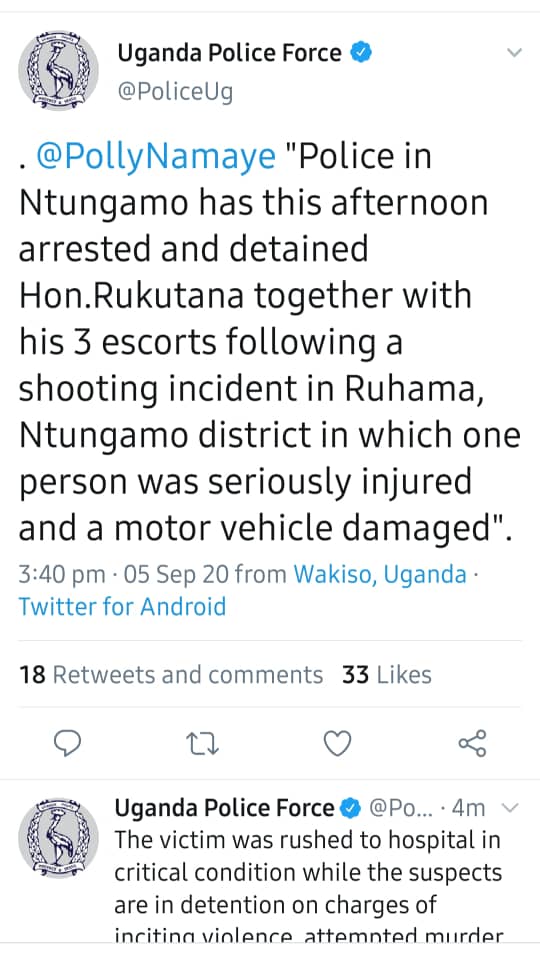 However, information later emerged that the voter in question Mr. Dan Rwiburingi was not dead but nursing head injuries after a bullet lodged in his head. He was evacuated for medication.

Mr. Rukutana who was by Friday night losing the vote count tally for Rushenyi constituency for which he is the incumbent MP, against strong challenger Naome Kabasharira is seen in a video clip circulating earlier on social media seizing a rifle to shoot at some people.
It is alleged that a one Dan Rwiburingi that was shot in the head by the minister in the debacle sustained head injuries on Saturday morning.