KAMPALA – The Uganda Revenue Authority board has appointed Mr Abel Kagumire as the Commissioner Customs department and two others to senior positions.

According to an internal staff memo issued by the board secretary Ms Patience Rubagumya, the URA board held a special meeting on August 26 and interviewed candidates for the senior management positions in the Departments of Customs, Corporate Services and Domestic Taxes.

Rubagumya further noted that the appointments are effective September 1, 2020. 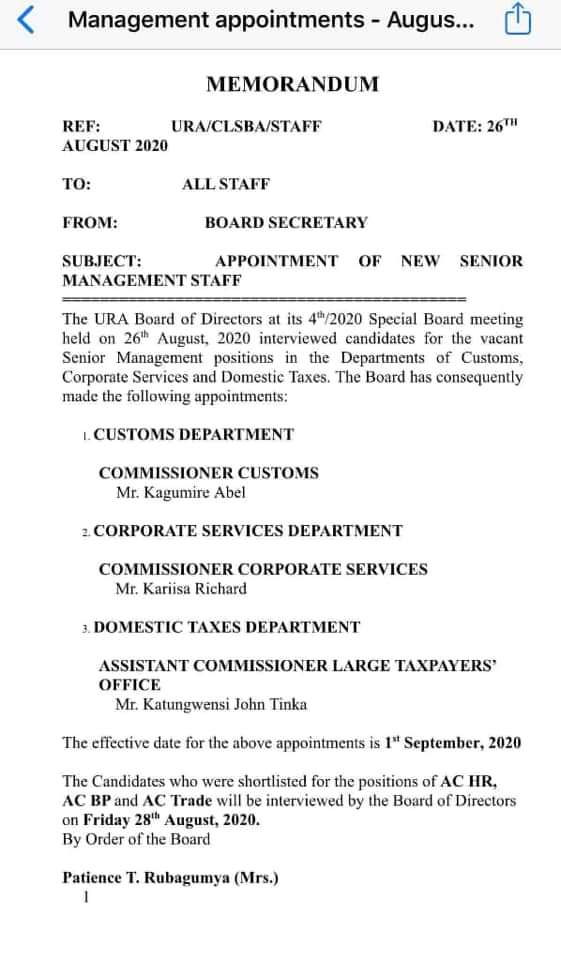 “The candidates who were shortlisted for the position of AC HR, AC BP and AC Trade will be interviewed by the board of directors on Friday 28,2020.
By order of the board,” she said.
The Uganda Revenue Authority (URA) on June 30,2020 reshuffled over 200 members of the customs department in what is viewed as the organisation’s start of a new era of efficiency and fighting corruption under Commissioner General John Musinguzi Rujoki.

Sources at URA intimated to this website that the reshuffles are the start of the “clean-up act” spearheaded by Mr Musinguzi in a bid to eliminate the staff believed to have been loyal to former Customs commissioner Dicksons Kateshumbwa.

Kateshumbwa was until February this year the head of customs until he was transferred to domestic taxes department from where he resigned.

But Mr Vincent Seruma, the URA spokesperson, dismissed claims that the reshuffles are connected with Kateshumbwa’s resignation.

“It is a normal transfer. We always transfer people especially at the turn of a new financial year. We do it to allow them acquire different positions and skills. Secondly, all staff have to be given an exposure to different conditions,” Mr Seruma said.