KAMPALA – The Director of Public Prosecutions has sanctioned charges against top central bank officials as findings of the Parliamentary inquiry into the sale of seven commercial banks start to bite.
Mr Bernard Ssekabira,  the Director of Financial Markets at Bank of Uganda, is first official to be summoned by the police Criminal Investigations Directorate to face trial in relation to the disposal of assets of some of the 7 banks whose sale was investigated by Parliament.
“This  is to inform you that the Director public Prosecutions  sanctioned the matter for the suspect to appear in Court and the purpose of this communication is to request you release Mr. Benedict Sekabira to report at CID headquarters on July 30, 2020,  such that he can be produced in court for the charges of concealing title deeds under Sections 278 of the Penal Code,” a July 27 letter from CID Headquarters to Governor Emmanuel Tumusiime Mutebile reads.
“The Directorate has been investigating the above matter that arose from the Committee of Commissions, Statutory Authorities and State Enterprises (COSASE) with directive to the Inspector General of police to immediately upon adoption of Special Audit Report on defunct banks seize all the land titles in possession of JN Kirkland and Associates and MS SIL Investment arising from the loan portfolio sold to Ms Nile River Acquisition  Company by Bank of Uganda,” the later indicated.

Mr. Sekabira, and other top officials at BoU were pinned by some of the key findings and recommendations of the report by Parliament’s committee on Commissions, Statutory Authorities and State enterprises in regard to the closed defunct banks and disposal of their assets.

The COSASE report that was presented to the hmHouse in November 2019 and adopted by Parliament recommended that the central bank officials involved in the sale of loan portfolios for the five defunct banks be held liable. 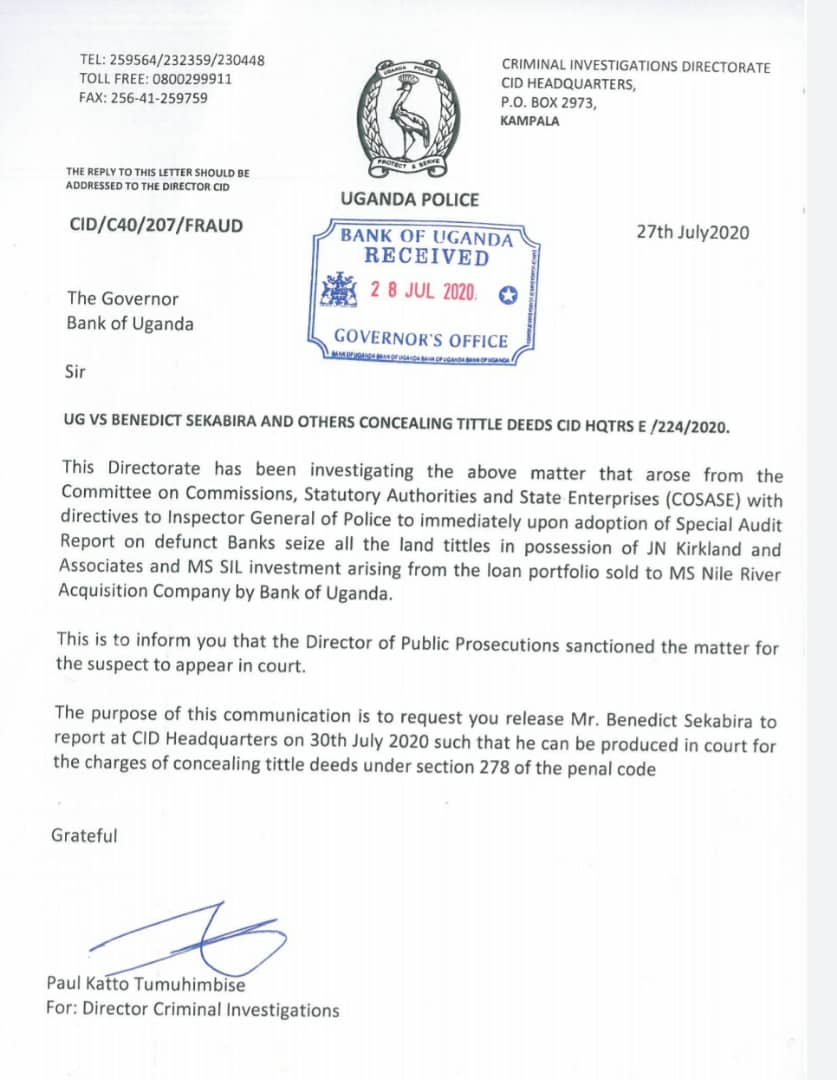 The MPs on COSASE probing  banks then had during the probe, tasked Mr. Sekabira, who became a controversial figure during the probe on the closure of seven banks, to prove that he had been properly appointed as liquidator of the banks.

Mr Sekabira later failed to produce the inventory reports on the closed banks but told MPs he had submitted them to three former BoU officials including Justine Bagyenda, Margaret Matovu and Apollo Obo who were supposed to submit them to the Governor. Governor Mutebile blamed the officials over the mess.