KAMPALA – Associate Professor Charles Niwagaba joins a list of more than five Makerere University staff who have been reinstated by court for illegal dismissal in the past four months.

Niwagaba who is among the 45 emplooyes that were dismissed from the University during the 2018 Christmas holidays spent over one year and a half in court seeking justice.

According to a letter dated July 3, 2020 by the Ag Director Human Resource Lawrence Ssanyu, Niwagaba’s appeal to the high court was a success as it directed the university to reinstate him in its April 29, 2020 ruling.

“The purpose of this letter is to inform you that you have been reinstated as an associate professor, salary scale from effective Iast January 2019,” reads an excerpt from the letter.

Court further directed the university to pay Niwagaba UGX115M in salary arrears and emoluments in addition to the UGX50M in court awards.

Speaking to URN, Niwagaba said he was accused of failing to submit examination scripts and results of students whom he said had graduated. 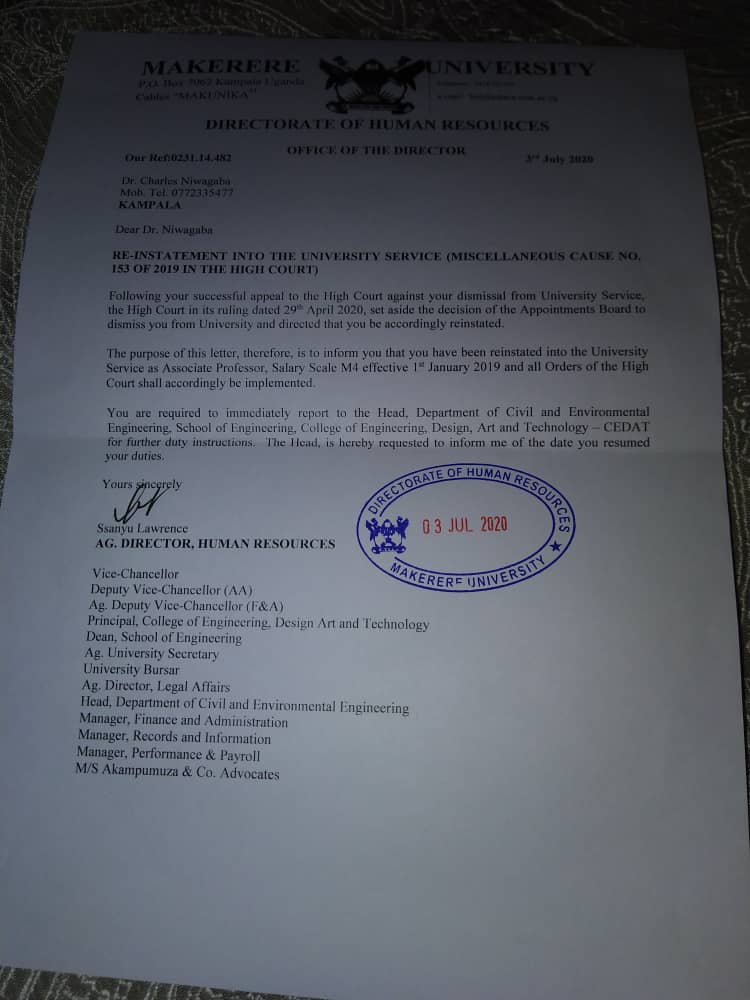 “The University system denied me a chance to prove my innocence leaving me with one option of seeking redress from courts of law,” he said.

Following his reinstatement,the fierce critic of the current University leadership said he is returning to the university as a humble man who will mind his business.

“I come back a very humble man. To be sincere, there is no clear reason for my dismissal up to date. But this circumstances might have been plotted as one of tge means to silence me and many others. Now i will just mind my own business,” said Niwagaba.