“At about 8pm last night at Zaana round-about, Mr. Tamale Mirundi Joseph Snr was involved in a car accident in which … a vehicle yet to be identified intentionally knocked his vehicle causing total damage to his car but leaving him(Tamale Mirundi) with minor injuries,” the Family reported via Facebook.

He was reportedly safe and alive with security agencies taking over the matter the family claims was a deliberate attempt on his life.

“I reliably inform the public that all his works and media programs shall continue as usual. I further want to appreciate each and everyone who responded after getting such news, through phone calls and those who reached at the scene. I also thank the security team for their bravely in such times,” they Family wrote. 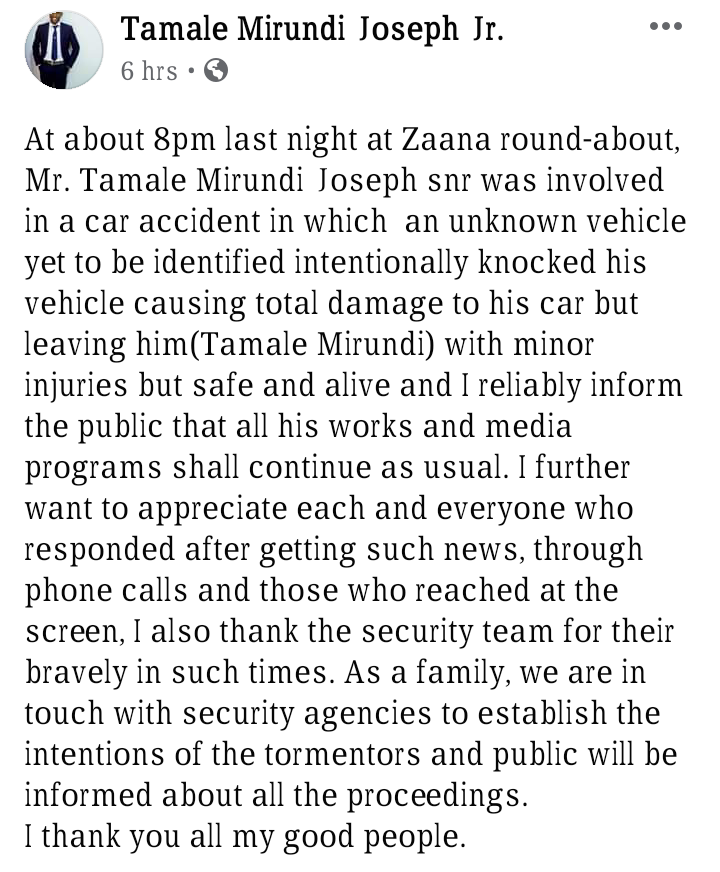 “As a family, we are in touch with security agencies to establish the intentions of the tormentors and public will be informed about all the proceedings.
I thank you all my good people,” reads the statement via the Family Facebook page.
We were unable to get a police comment before uploading this story.

However, Mr. Mirundi has been a man at war, and has recently been involved in high level spats with senior government officials he a accuses of being mafia.
The spats led to him being kicked off some media stations including a flagship program on NBS Television — “one-on-one with Tamale Mirundi”.

On Tuesday, June 16, 2020, Mr Mirundi revealed that nothing will stop him from taking on the government mafia. One of the reasons for his suspension from the talk shows was that he was spreading propaganda and sabotaging messages against some government plans and officials.

But an angry Mirundi told this website in telephone interview that the days of the mafia are numbered.

He revealed that NBS TV wanted him to apologise for his remarks on stolen Covid-19 but that he refused, saying that he has the facts.

“The President even summoned them and Chairman Covid-19 task force Dr. Emmanuel Katongole,he is aware of this. President’s underground team is investigating it. Heads will roll soon. So,in simple terms,I have refused to apologise as NBS was pushing, and will therefore not appear on NBSTV anymore,” he said.

Mr Mirundi further revealed that the government looters cannot manage him.
“But these mafias think they can handle me? Me me me TamaleMirundi? I’m an arrogant fellow, abo balutwetwe bajja kusesema byebabba lumu.”