KAMPALA — Maj. Gen. Kasirye Gwanga who passed away on Monday has on FridayJune 12 been laid to rest at Nkene Village, Manyi Sub-county, Mityana District.

Locals were prohibited from attending the “scientific burial” —forcing them to watch his send-off on televisions and other online channels.

Maj Gen Kasirye Ggwanga, 68, died at Nakasero Hospital where he had been admitted. 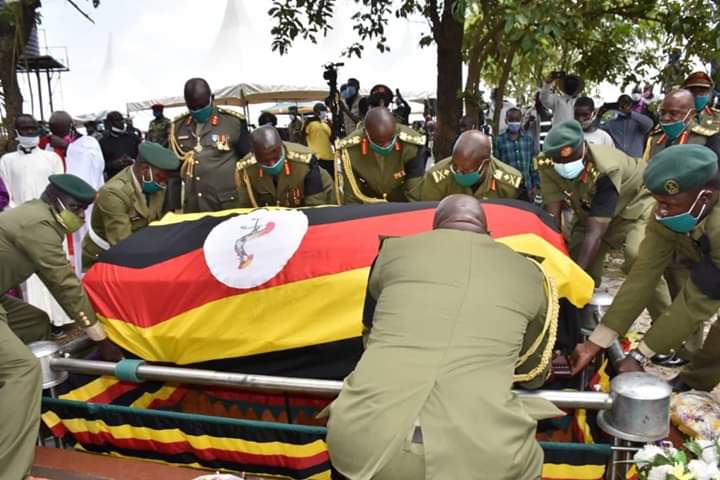 Gen Kasirye Ggwanga received a thirteen-gun salute, usually accorded to army officers from the rank of brigadier and above.

The army conducted all the ceremonies, including digging and building the grave.

The brown coffin, draped with the Uganda flag, was lowered into a brown grave. 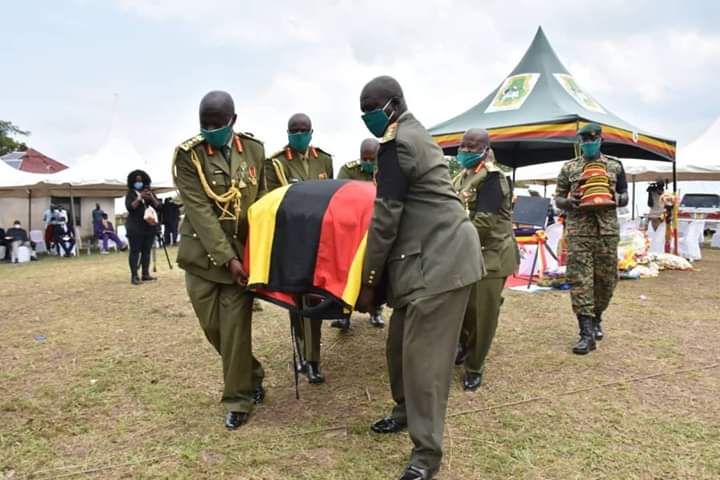 In his condolence message, Kabaka Mutebe described the fallen General as a human rights activist and a great environmentalist— expressing grief at the demise of the Gen. Ggwanga.

“We thank him because he has also dedicated a lot of time towards the development of youth in Buganda. In life, he was a determined person, hardworking and always showed concern about his ancestral area. We sympathize with our people in Ssingo, Busujju and Buweekula for the loss,” the Kabaka wrote.

Gen. Katumba Wamala, who represented Government described Maj. Gen Ggwanga as one who loved the military and a real soldier in all aspects.

He said the late Gen. Ggwanga’s life was an inspirational especially his integrity and not being driven by material things.

Gen. Katumba said Ggwanga will remembered for the lives he touched while he was still alive but also appealed to his children to uphold his (Ggwanga’s) legacy.

The CDF, Gen. David Muhoozi hailed Ggwanga’s selfless military service and described him as a nationalist who has always been loyal to his family and the leadership of Uganda.

Gen. Muhoozi said Gwanga had a straight-forward character, lived an impactful life, has left behind a legacy, and he will be greatly missed.

He, however, challenged Ggwanga’s children not to squander their father’s social capital and not take the network of friends he left behind for granted.

Ggwanga was born in 1952. He went to Katakala Primary School, Kibuli Secondary School for his O-Level education. After his O’ level, he joined the Uganda Army in 1972. When the Tanzanians attacked Idi Amin’s government, Kasirye Ggwanga was arrested and taken as a prisoner of war in Tanga, Tanzania. 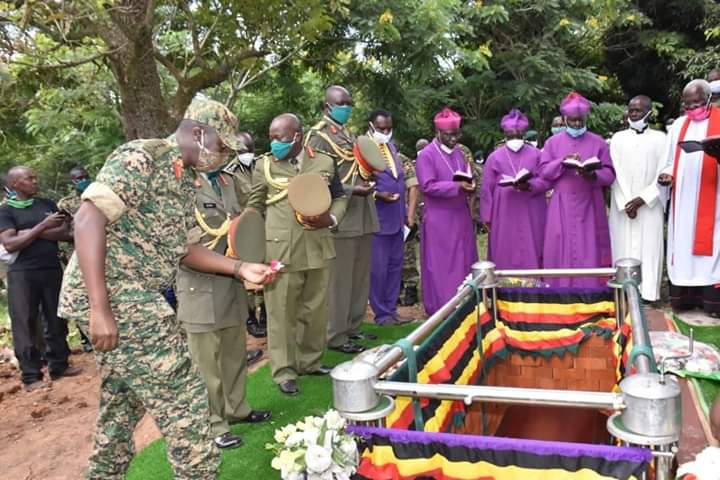 He was released in 1981 after the government of Godfrey Lukongwa Binaisa negotiated the return of prisoners of war.

He joined the Uganda Freedom Army led by Dr Lutakome Kayira up to 1985 when he joined the National Resistance Army rebels led by now President Yoweri Kaguta Museveni. His main area of specialization was in the artillery and commanded 120mm unit as they attacked Kampala in January 1986.

All photos by UPDF media team