KAMPALA – At least nine judicial officers (Chief Magistrates and a Magistrate Grade One) have been shuffled in the new transfers announced by the Ag. Chief Registrar, Tom Chemutai

The transfers were communicated in a memo dated June 5 where the Chief Registrar explained that the list includes the deployment of one Judicial Officer who has been on special assignment. Adding that the changes will take effect on July 1, 2020.

He further urged all the affected judicial officers to make preparations to hand over their offices in accordance with Chapter 1, section F-d of the standing orders of Government of Uganda.

The transfers have seen the re-deployment of Dr Singiza Douglas K, who has been away on a special assignment with the Commission of Inquiry into Land Matters. Similarly, the Chief Registrar deployed another chief magistrate at the Jinja Chief Magistrates Court to replace Ms Hellen Ajio, who was promoted to the position of Assistant Registrar late 2019.

Mr Chemutai emphasized that the transfers and deployment are aimed at improving service delivery. 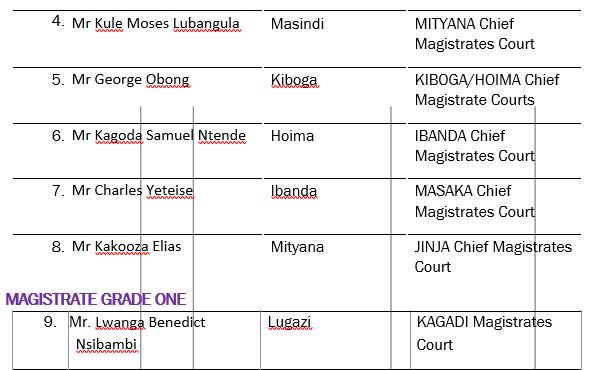