KAMPALA – The High Court has ordered businessman Obadia Ntebakaine to pay $304,595 (more than Shs1.1 billion) to financial institution, Prime Finance Company Limited for recovery of loan advanced to him with interest.

The court also ordered Mr Ntebakaine to pay the financial company general damages worth Shs12,000,000 and interest at a rate of 8 percent on the decretal sum from the date of judgment until payment in full.

Kampala High Court Judge Musa Ssekaana ruled that there was a contract for loan repayment which was not honoured by Mr Ntebakaine within the stipulated time.

The judge also agreed with the complaining firm that the case was filed within the required time frame by the law since the cause of action last arose in 2015.

“The cause of action usually accrues on the date that the injury to the applicant is sustained. The statute of limitation clock is intended to tick solely from the time of the wrongful act, not from the time harm is realised,” Justice Ssekaana ruled.

The court decision arose from a case in which the financial firm sued the businessman based in Bushenyi for recovery of $3,071,681 resulting from breach of a loan agreement.

The company also asked the court to declare that Mr Ntebakaine was in violation of the company’s economic rights as enshrined under Article 40 (2) of the Constitution, special damages, general damages and legal costs incurred. 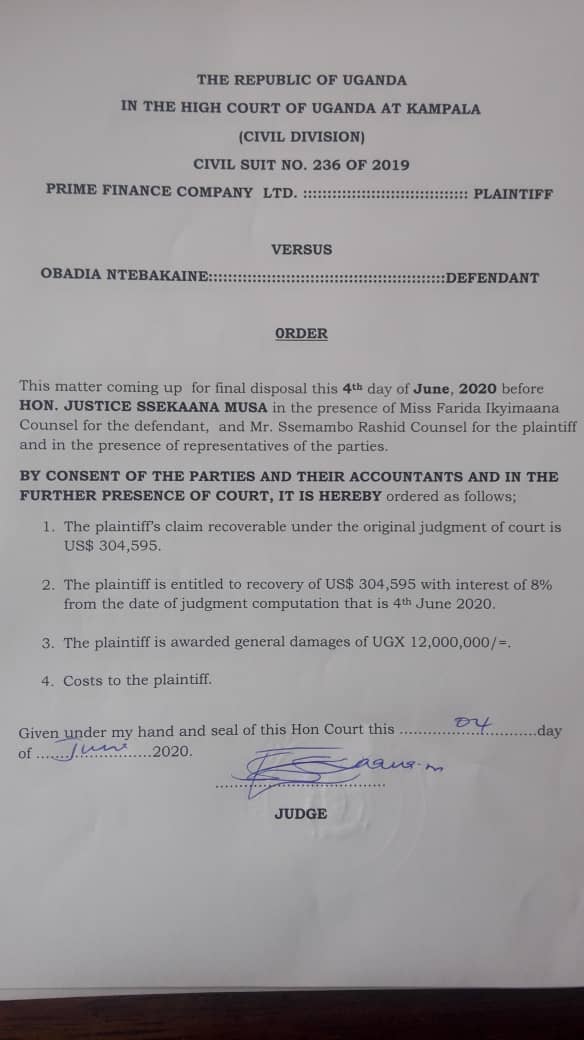 The judge held that the financial company is entitled to recovery of loan amount advanced with interest as per the agreement of 0.6 percent per week computed at simple interest until the date of judgment (4-3-2020).

“The lump-sum figure presented to court appears to have been computed at compound interest by the plaintiff. The parties should agree on the actual amount within 24 hours and report back to court,” the court ordered.

Court record shows that Prime Finance Company Limited and Mr Ntebakaine entered into a loan agreement whereupon the defendant borrowed $200,000  for a period of two months and thereafter, the businessman issued a post-dated cheque dated November 27 2008 amounting to $211,062 as repayment over the said loan period covering the principal and interest of the same.

According to the court file, it was agreed that in the event that Mr Ntebakaine fails to pay the said loan within the agreed timelines, he was to continue repaying the loan at an interest rate of 0.60 percent per week on the outstanding balance until the completion of the loan.