KAMPALA – The State Minister for Disaster and Preparedness, Mr Musa Ecweru, was on Thursday, May 7, 2020 shocked at the trail of destruction left behind by the floods that pounded Kasese District.

Several rivers in the area such as Nyamwamba, Mubuku and Nyamughasana on Wednesday night, burst their banks, letting off huge flooding that swept away homes, gardens, schools and inundated hospitals.

And as the minister toured severely affected areas such as Kilembe, Kyanzuki, Katiri, Basecamp, Acholi-quarters, Maliba-Kyanya, Musasa-Kyalhumba, Habitant, Road-barrier, Kanyangeya, Ibanda, Karusandara, Kibuga and Kivengenyi, the reality of the devastation struck him. For a long period as he toured with area leaders, he did not talk. He only observed houses being swept away by the floods while others are still emerged.

The flash floods also cut off Kasese-Fort Portal main road at Nyamwamba bridge. In Bundibgyo, river Lamia at the Uganda-DR Congo burst its banks and spilled to communities according to the LC III chairman Busunga town council, Mr Friday Kakwanga.

Other flooded rivers in Kasese include; Thako, Lhubiriha and Lume.

Dr. Edward Wafula, the Medical Superintendent at Kilembe Mines Hospital, said that the facility was submerged and one patient died instantly after the oxygen machine went off due to the stampede of patients and the evacuation from the hospital wards. 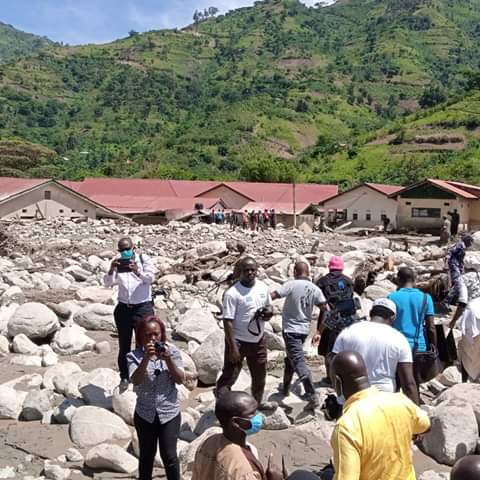 Mr Ecweru also met several helpless residents who are stranded with no where to go after their homes were either submerged or swept away by the water.

He appealed to the district authorities to relocate the affected residents to dry areas and house them at schools and churches as government arranges relief support such as tents and food.

Godfrey Kabyanga, the Kasese Municipality Mayor, said together with area leaders they are working on relocating affected residents to safer areas.