JINJA — Jinja Resident District Commissioner (RDC) Eric Sakwa has on Friday May 9 been fired and ordered to handover office with immediate effect.

According to a letter signed by Hajji Yunus Kakande, the Secretary, Office of the President, Mr. Sakwa is relieved of his duties as RDC and he has been blocked from leaving the country.

“You are required to hand over any government property in your possession in accordance with the laid down procedure and regulations,” reads the letter adding that he will receive salary not less than half of his basic pay.

The Jinja district internal security officer will take over from Sakwa in interim capacity.

The salary reductions are subject to refund in case the suspension is lifted and charges are dropped, the PS said in his letter ordering the controversial RDC’s interdiction. 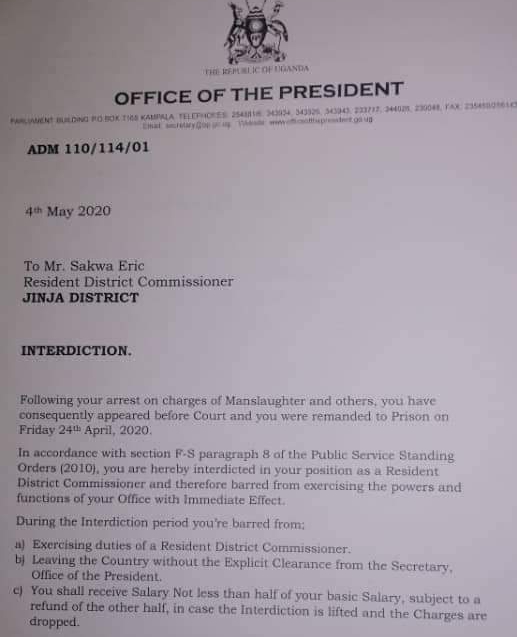 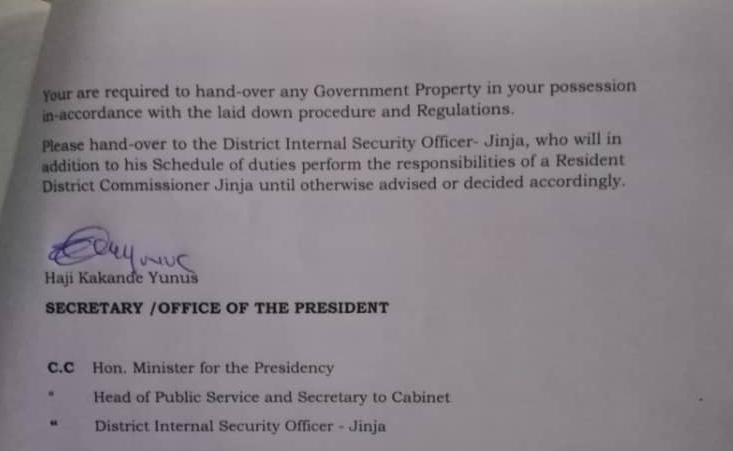 Sakwa was last month charged with manslaughter, a crime of killing a person without malice aforethought (conscious intent to kill) and carries a maximum punishment of life imprisonment upon conviction.

Prosecution alleges that Mr Sakwa, 38, between March 22 and April 17 this year at Lwanda Village in Jinja District, unlawfully caused the death of Charles Isanga, a businessman in the area.

Since his posting to Jinja, Mr Sakwa has had an eventful tenure on all fronts, but largely for clashing with alleged land grabbers.

Jinja has not had a deputy RDC since last year when Ms. Hanifa Kaladi resigned, allegedly citing a poor working relationship with Sakwa, among other reasons.