MITYANA/KAMPALA – The Judiciary has said that Mityana Chief Magistrates Court on Monday, April 27, 2020, declined to formally charge the area Member of Parliament Francis Zaake after he was taken to the Court on a stretcher and visibly ill.

The Court has ordered the Police to first take the MP to a proper medical facility for treatment,” added the Judiciary in a brief statement released via social media.

According to medical documents, the Iran-Uganda Hospital had referred Zaake for further treatment at Nsambya hospital after his condition worsened.

CID Spokesman Mr. Charles Twine last week denied that the MP who was detained on allegations of doing a negligent act likely to spread coronavirus was tortured.

On Monday morning, Police drove the MP at breakneck speed from Iran-Uganda hospital Naguru to Mityana Chief Magistrate Court after People Power group to whom Zaake is the national Youth leader intensified calls to let the MP access medical treatment.

Whereas the MP was not formally charged by the court, he faces two counts including negligent acts likely to spread the infection to coronavirus contrary to section 171 of the penal code act. 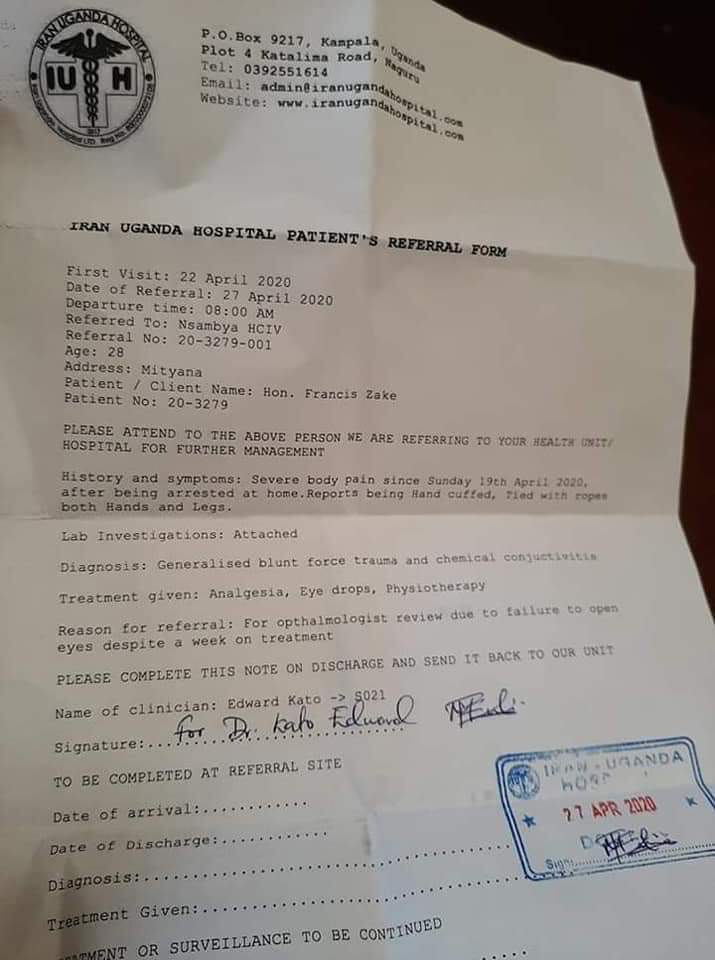 The prosecution alleges that MP Zaake on April 19 flouted lawful guidelines in relation to public gatherings and Presidential directives on coronavirus and that he negligently distributed food to communities without putting in place necessary measures to stop the spread of COVID-19.

“Mr. Zaake Francis on the 19th Day of April 2020 at Buswabulongo Village in Mityana District distributed food to the Buswabulongo Community negligently without taking necessary precautions, an act which was and which he knew too he likely to spread the coronavirus which causes COVID-19, a disease dangerous to life,” the office of the DPP alleges.

“Francis Zaake! Brutally arrested over a week ago. Severely brutalized & kept under illegal detention! Here’s the medical referral- still unable to see after chemicals were sprayed in his eyes!” Kyadondo East MP Bobi Wine said, adding that “not even violations to this level will silence group demand for freedom!”