ENTEBBE — The Commander Special Forces Command Maj Gen James Birungi has hailed the Uganda People’s’ Defence Forces (UPDF ) for the discipline which has beared positive fruits demonstrated both in Uganda and outside.

He applauded President Museveni for having initiated a good heroic vision and struggle that brought the current government in power.

He said that the patriotism and discipline of the UPDF was and still is the yard stick to the winning all battles UPDF has fought.

The Deputy Commander Air Force Brig Tumusiime Katsigazi while flagging off the route match congratulated the UPDF family upon marking 39th Anniversary, citing that the decision made on 06th Feb 1981 was the origin to fight poor governance that had made Uganda be called a failed state. 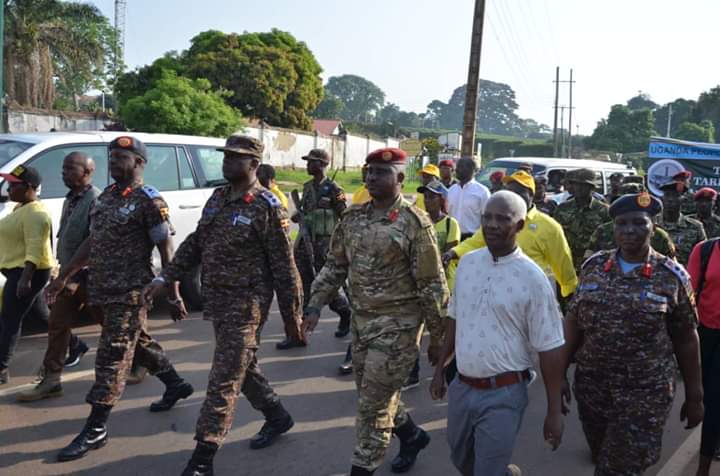 “Always have in mind that the peace we have,the development,the security are products of those heros who shed their blood” emphasised Brig Katsigazi.

Gen Kastigazi requested leaders to be examporaly in planting new “trees” about the struggle and it’s intent such even when we not there the intent continues .

“Be examples to the young generation in the Forces ,do your work, be ideologically upright and mentain discipline if u are to develope Uganda .

The Entebbe Municipality Member of Parliament Hon Rosemary Tumusiime acknowledged the excellent work done by the commander in Chief, his restless efforts to improve the quality of life of Ugandans through his visionary leadership and entire UPDF family for being professional and showing higher degree of discipline and service before self .

“The fruits of the struggle are peace, stability, social economical transformation empowerment of the population especially the special interest groups, education for all, improved health service delivery and export of UPDF to other nations for peace keeping mission are what we celebrate today and should guard it jeolously” she stressed.

There was also lots of entertainment from SFC and Air Force spouses, Air Force cultural group and launching of the Teakondo club at Airforce colored the function .