Minister Nabakooba in a letter dated Friday, February 7, 2020, noted Eng.  Kaggwa Sewankambo, who has been the director of Engineering and communications infrastructure, has taken over in acting capacity until a substantive director is appointed.

UCC management has confirmed the new changes in a public statement.

“This follows the expiry of Mr. Mutabazi’s tenure as the Executive Director of the UCC and as such we take this opportunity to thank Mr. Mutabazi for the tremendous contribution that he made for the UCC and the Communications sector.” 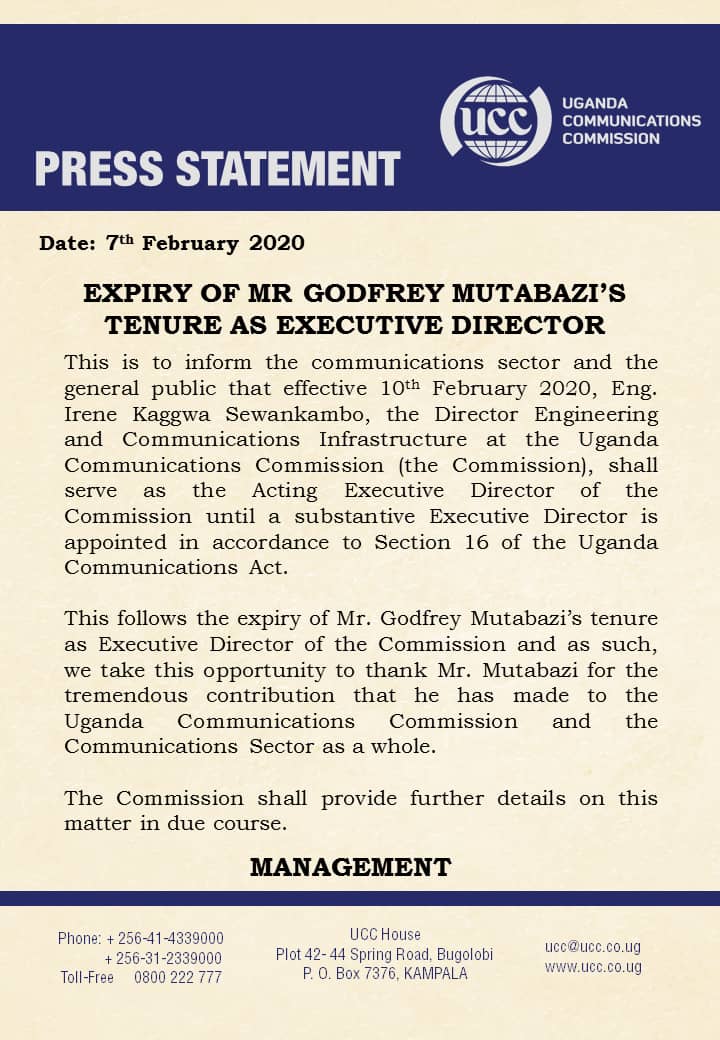 Eng. Mutabazi who replaced Eng. Patrick Masambu in 2010 has presided over one of the fastest-growing sectors in Uganda.

Under his leadership, UCC has registered growth in Mobile and fixed subscriptions grew from less than 50,000 active lines in 1996 to 24 million in 2018, according to statics shared by Ibrahim Bbosa, the consumer affairs manager at UCC.

“…one of the best decisions UCC has ever made is directing the use of Biometrics for SIM card registration and verification.”

Uganda now leads the continent in having the most liberalized broadcasting industry with about 292 licensed FM radios and over 35 Television stations.

There are more than 40 Free – To – Air TV channels and the completion of Analogue to Digital Migrations need mention in spite of a few challenges.

All this comes at the back of an innovative licensing regime, prudent monitoring, inspection, supervision, control, and regulation.