Mrs. Kasule Lumumba at a press conference on Tuesday January 14 said such MPs have not been invited to the party’s forthcoming delegates’ conference scheduled for next week.

The Delegates’ Conference is slated for January 25 at Namboole Stadium. Among others, the role of this conference is to choose the Party’s Presidential Candidate.

However, the party legal director

Kihika in a letter dated Wednesday January 15 to party Secretariat described the action by Ms. Lumumba as a breach of the party constitution —insiting that the 30 members should be allowed to attend.

“It has come to my notice via press reports that there is a proposal to block some 30 NRM members of Parliament from attending the National Conference which is slated to convene on the 25. of January 2020.

He added: ” To the best of my knowledge, these MPs have thus far not been dismissed from the NRM.” 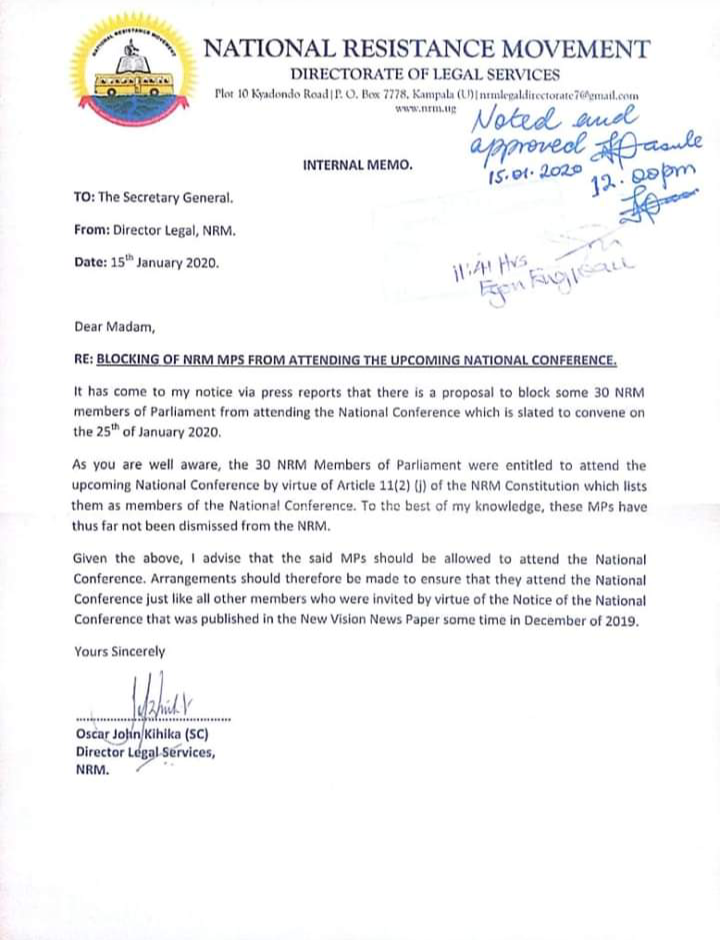 Tinkasimire scoffed at the party plans, saying that he is not in Parliament because of NRM.

Workers MP Sam Lyomoki described Ms Lumumba’s announcement as baseless and illegal, adding that he is a founding member of the party who cannot be pushed away like that.

The party will convene the 2nd Meeting of the 3rd Mainstream National Conference on 25th January 2020 at Mandela National Stadium, Namboole. The main purpose of this conference is to effect amendments to the NRM Constitution

“The lists of delegates to attend the conference have been verified and approved by the District NRM Leadership. These are going to be displayed at the NRM offices for any person to view and ensure that only those on the lists attend the Conference,” Ms Lumumba said.

“The public is hereby informed and cautioned that only displayed delegates on the lists at the NRM Offices will be accredited to attend the above meeting and therefore no claims whatsoever will be entertained from any non-participants travelling to Kampala for the Conference. Delegates are also advised to come with their national Identity Cards,” she added.

The National Conference will be proceeded by the Central Executive Committee (CEC) and the National Executive Council (NEC) meetings that will be held on 23rd and 24th respectively. Accreditation for NEC will be on January 23rd while for the National Conference will be on January 24th both at Kololo Airstrip. All delegates are expected to transport themselves to Kampala. This conference is being organized by the National Secretariat under the supervision of the oversight committee comprising some CEC members headed by the First National Vice Chairperson Rt. Hon. Al-Hajj Moses Kigongo