MASINDI —The Chief of Defence Forces Gen David Muhoozi has told parents of Artillery Division based in Masindi to always inspire their children in order for them to realize their dreams and hence create a better Generation.

“As parents, be good examples to your children, raise them with discipline and morals because they are the future leaders of this country” said Mr Muhoozi.

Gen Muhoozi said this while officiating at the end of year children’s party he threw for children of the four schools housed within the Division.

The party was held at Masindi Army secondary school grounds.

The CDF observed that family touches the hearts and minds of all soldiers and impacts on their performance, therefore a good family is the basis of good performance at work.

He said this years’ end of year children’s party was the second biggest party to take place at Artillery Division Masindi, the first one having been a mass wedding which was held a few years ago.

He informed his guests that the idea of children’s party was started way back in 2016 by his predecessor Hon Gen Katumba Wamala at Land Forces Headquarters in Bombo, and that since then to date the event has been rotational from Bombo, to Kakiri 1Div headquaters, to Air force Entebbe and this year the party is organized in 2Div Mbarara, Artillery Division Masindi and Jinja Cantonment. 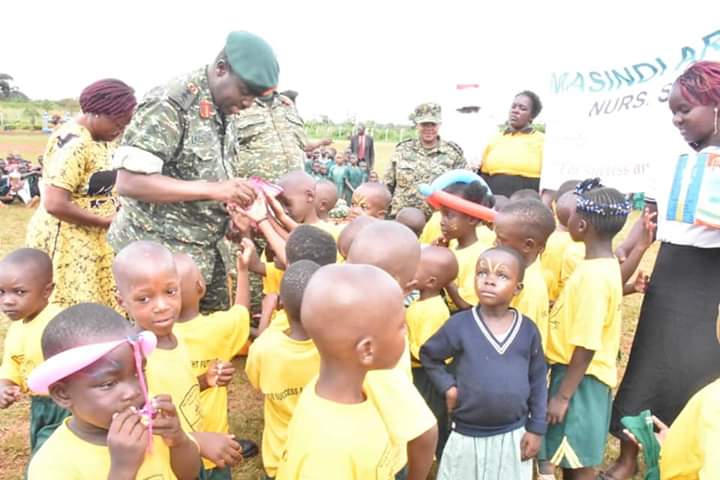 Gen Muhoozi commended soldiers’ wives for the exhibition and the different projects they were undertaking at the Division.

Speaking at the same Function, the Commander Artillery Division Maj Gen Sam Okiding thanked the CDF for loving children and being a good parent who has always worked tirelessly to see to it that they are brought up well in the most disciplined manner.

Maj Gen Okiding observed that, lately soldiers are very good people and very professional hence making them model families thanks to the prevailing peace and the professionalization of the force .

Mrs. Rebecca Mugume, the head UPDF spouses desk praised the children for talking about what happens in their homes in the Drama they presented to the CDF , saying as parents they should be careful when doing some things because they impact on their children .

She went ahead to tell children to be good and listen to their parents during this long holiday they are going in.

The day’s event was marked with alot of activities for children ranging from bouncing castles, Running in sacks, water trough plays, dance and drama, net ball and football 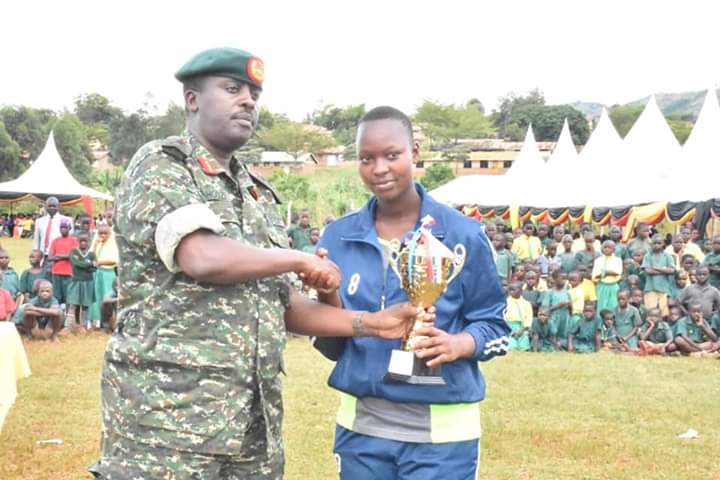 The colourful function was also graced by civil and political leaders of Masindi district and the local population sorrounding the Division headquaters.