You can’t fight crime without public help, Museveni to police

KAMPALA – President Museveni has tasked police leadership to collaborate with people, saying that it’s the only way they can curb down criminals in the country.

Addressing the Police Council at the Police Headquarters in Naguru, Kampala on Tuesday, Museveni also revealed that there are still errant officers in the police, tasking the leadership to fight it out.

“Keep close to the people. The leadership of the police can get a lot of intelligence by interacting with people, including on conduct of their staff. And use this information to curb crime and discipline your errant officers,” said the president.

Museveni was, however, not happy with police ideology, saying that they have slowly lost the value of protecting people and their properties.

“The police must know their mission. The police must protect the people, their lives and property. I was reading in the newspaper that a school director was defiling girls who feared to report,” he said.

“One got courageous and reported, the director was held briefly and given bond. I am going to follow up this case. Who gave him police bond? The watchman who helped to report is also being attacked. This is the ideological disorientation I am talking about,” warned the president.

He, however, promised to improve the living of police saying that “we shall then focus on welfare concerns of the police like housing and medical care. Already some work on housing is underway. I would also recommend a police boarding secondary school per zone (Buganda, Ankole, Elgon etc) with each family allowed upto four children fees-free.” 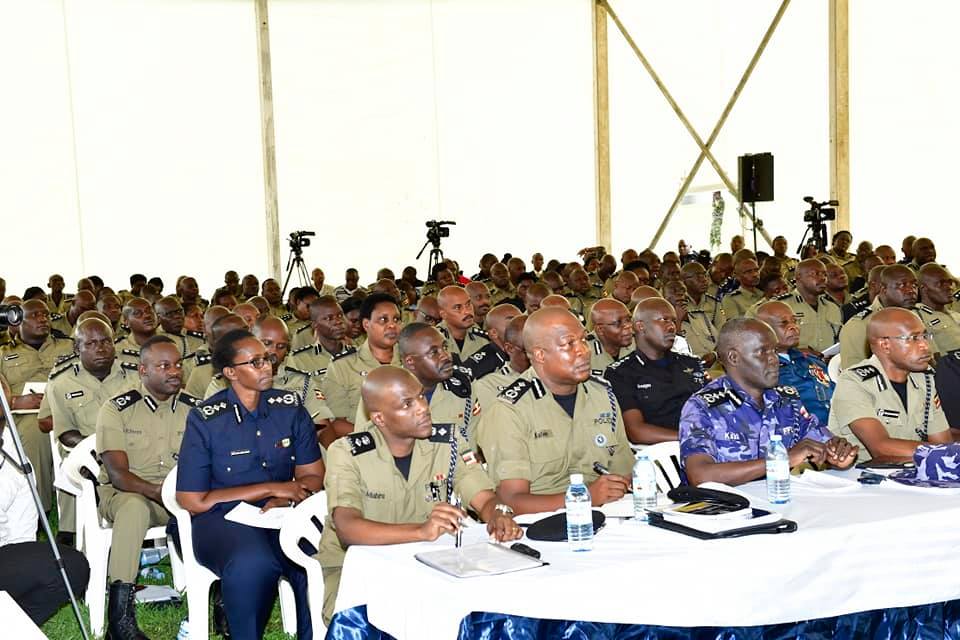 Museveni asked police to come up with a policing plan of at least having a police station per sub-county, something he believes will reduce crime rate in the country.

“Today, the population has grown but you still need a clear policing plan. The idea is to have a police station per sub-county manned by at least 20 staff. You then give them at least two motorcycles per station for their work,” he said.

“Twenty people for every four miles radius should be adequate if supported by the gombolola intelligence officers. If the sub-county is bigger than four miles, you then establish a second police station,” he added.

He said that Ugandans now own about 22 million mobile phones, something he said has eased communication and tasked each police station to have a telephone line given to the public to call in case there’s trouble. “And if such a call comes, at least three police officers must respond.”