Victory for Anite as Kasaija removes Bemanya as administrator of UTL

KAMPALA – The Ministry of Finance, Planning and Economic Development has announced that the indebted Uganda Telecom Limited (UTL) will have a new administrator effective November 22, effectively ending the tenure of Mr Bemanya Twebaze that has been dogged by controversy.

In a statement issued on Friday, November 8, 2019, Finance minister Matia Kasaija announced that following a meeting with his state ministers, they agreed that they will extend the administration of UTL as they continue to find another investor. However, under the arrangement, they said that the current administrator must be replaced on November 22 when his current tenure ends.

The development is victory for Investment minister Evelyn Anite who has been seeking to remove Bemanya with no success.

Ms Anite had earlier been engaged in a war of words with Attorney General William Byaruhanga and his Deputy Mwesigwa Rukutana over the legality of her directive to remove Mr Bemanya from the administration of UTL.

Mr Museveni, in a letter dated 3rd July, told Gen Otafiire that no one has authority to make a decision on the fate of UTL without involving Cabinet. 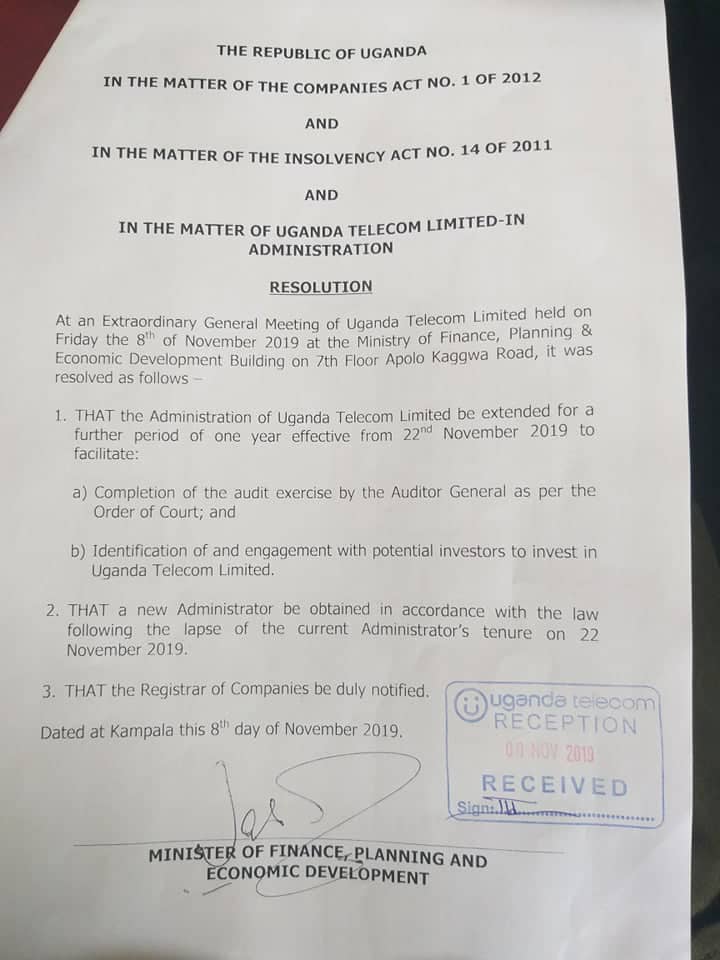 It adds: “Therefore, no action, contrary to Cabinet’s position should be taken. Further, Cabinet must always be consulted on any investment or related decision concerning UTL before they are taken.”

Maj Gen Otafiire, in response, directed the Registrar General to ensure UTL is not liquidated.

“I have received guidance from the President on the matter and hereby direct you as follows; UTL is of strategic importance and you are required to ensure it is not liquidated. As the administrator, you are requested to expedite the process of sourcing a strategic investor,” the letter dated 4th July reads.

On July 1, Attorney General William Byaruhanga said Ms Anite has no powers to order the removal of the administrator of Uganda Telecom Limited (UTL), reiterating an earlier position by his Deputy, Mr Mwesigwa Rukutana.

On July 28, Mr Rukutana said he would not apply to court for the removal of Mr Bemanya Twebaze, arguing that Minister Anite has no supervisory powers over the former.

While Ms Anite immediately rebuffed Mr Rukutana’s legal opinion, Mr Byaruhanga said that the minister had no chance of winning the case against Mr Twebaze in court.

“The Minister of Finance as a shareholder of UTL has no locus to apply to court to remove the administrator and any such application is bound to fail,” Mr Byaruhanga’s letter to Finance minister Matia Kasaija reads in part.

The Attorney General reiterated Mr Rukutana’s stand, saying as per the Insolvency Act, administrators only report to creditors of the company and file the reports to court and inform the Registrar of Companies.

Mr Byaruhanga, nevertheless, said if there is any evidence that Mr Twebaze is mismanaging UTL affairs, the different government parastatals, which are shareholders of the indebted Telecom, can go to court and apply for the administrator’s removal.