KASSANDA —Residents in Kassanda District have written to Speaker of Parliament Rebecca Kadaga seeking for the cancelation of a fake title to the land allegedly grabbed by lawyer Sam Bitangaro.

The contentious land tittle is located on block 30 plot 122 in Kassanda District.

Residents claim that Sam Bitangaro and his group which also includes area MP Simeo Nsubuga never possessed any single Kibanja from villages of Mirembe, Kanyogoga, Lwenyage and Kabulengwa as he alleges.

Lawyer Bitangaro has been in land wrangles with businessman Abid Alam saying that his land tittle covers Bukompe village for  many years.

To expose the outright land scam, on October 24, Mr. Ibrahim Magemeso from Ministry of Lands and housing carried out a survey to verify where Sam Bitangaro’s alleged land tittle is found.

According to survey report, the land title was found not located in Bukompe village as he alleges but it was instead found covering other four neighboring villages Mirembe, Kanyogoga in Naultuntu Sub County, Kabulengwa village which found in Manyogaseka Sub county and that it continued to Lwenyange village which is found in Kiganda Sub County all in Kassanda District.

The residents have since protested Bitangaro’s land title saying he acquired it in fraud way and that he wants to fix it in a wrong place hence thousands of Ugandans.

Residents have also reported their area legislator Mr. Nusbuga to Speaker Kadaga accusing him of aiding violent land evictions and land grabbing in the district.

“We undersigned residents from the above villages do here petition to your office for the cancellation of Sam Bitangaro’s land tittle basing on the fact that he acquired it in fraud way and he wants to fix it in a wrong place hence leading to eviction of innocent Ugandans,” residents said in their petition dated November 3.

This website understands that the said  ‘fake’ title  was sold to Kiboga Twegatte Cooperative ltd.

Residents noted that they have approached various leaders including the permanent secretary Ministry of Lands and housing and the President in vain.

“We request your office to investigate into this matter and with the trust we have into your office, we hope and we’re sure justice will be served,” they added.

Residents and leaders in Kassanda District last week asked the Commission of Inquiry into land matters chaired by Justice Catherine Bamugemereire to investigate their area MP Simeo Nsubuga over land grabbing and masterminding land scams using cronies such as a one Sam Bitangaro.

“We are taking these issues to the lands ministry permanent Secretary, the land commission and Anti Corruption Unit,” one of the leaders said adding that fake land tittle owned by businessman Bitangaro must be cancelled.

“They [Sam Bitangaro and Simeo Nsubuga] manipulated the titles in Bukompe after stealing Luwunga reserve that belonged to Kiboga evictees,” another resident told this website urging Bitangaro to refund the money to Luwunga evictees and his tittle canceled because “it is fake”. 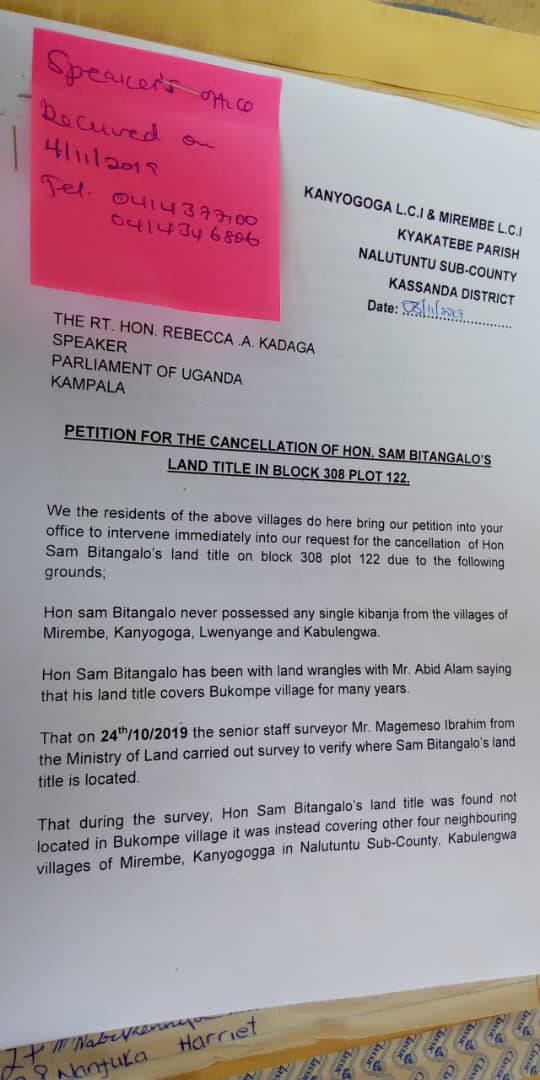 “We have been on this land for 64 years now. We can’t just seat and watch them taking our land,” one of the residents who in the edge of being evicted in the massive land scam said, urging colleagues to fight the MP for not only terrorizing wananchi but also for being actively involved in the Luwunga Forest Reserve conflict.

For a long time, Mr. Nsubuga whose constituency has a lot of land wrangles and violent evictions is accused of allegedly abetting the encroachment on Luwunga land.

The accusation against the legislator who vocally supported the lifting of the presidential age limit have also reached the Head of State House Anti-Corruption Unit, Lt. Col. Edith Nakalema.

In one of the recent country tour meetings,  Lt. Col. Nakalema, said her team would raid Kassanda and that wrongdoers will pay for their actions.

She promised residents that her team would arrest all the people involved in the land scam especially those who sold air to government.

Much as her team full filled the promise by arresting a number of people implicated in a botched plan by government to resettle over 2,500 families that were evicted from Luwunga Forest Reserve in Kiboga District, some fled and residents in fresh demands claim that their area MP Simeo Nsubuga and Sam Bitangaro were part of the scam and that they should be investigated and arrested to pay for their impunity. 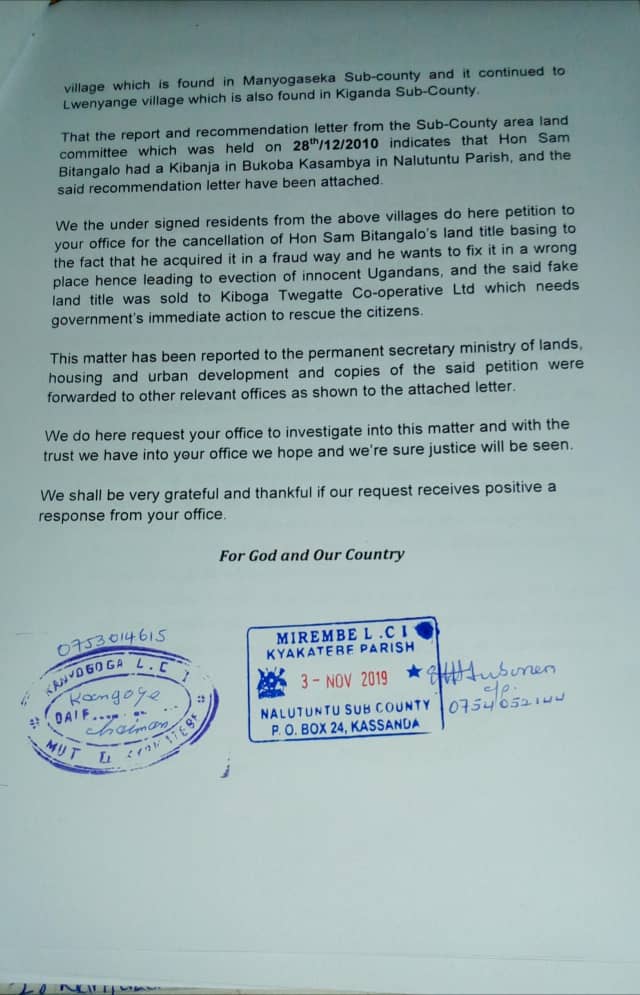 Mr. Bitangaro who is said to have worked with other people including Simeo Nsubuga allegedly sold to have sold the piece of land to the Luwunga Forest Reserve evictees, a situation that led the wananchi to having land titles without land on the ground.

Ssemaganda who is still recovering from life-threatening injuries said he was threatened with murder over the same.

He’s Catholic! NUP draws the ire of the public, Catholic community as Chameleone is undermined by religion to miss party Mayoral ticket