Danger as Karamojong resort to charcoal burning to earn a living

MOROTO – Despite several interventions that the government is putting in place to protect environmental degradation across the country, these interventions could be working very well in other parts of the country, unlike Karamoja region where people have turned into charcoal burning as source of survival.

A one week survey carried out by PML Daily across Karamoja, finds that the only available source for the residents to put food on table is through felling down tress and burn charcoal.

A 70-year-old Lokol Aparere, a resident of Musupo village in Rupa sub-county in Moroto district wakes up at 5 am, wraps his bedsheet going to the bush looking for a big tree to cut down to burn charcoal. For him burning charcoal, it’s the only available source where they can manage to put food on the table.

“We used to rely on food donations but it’s now coming to eight years UNWFP does not give out food and we don’t know so life it’s very hard,” he said.

Grace Angolere another resident who depends on charcoal burning said most of the residents of Rupa sub-county feed on their families through burning charcoal and sale.

Ms Angolere is totally ignorant about the dangers of cutting down trees what she only after is that her children have eaten a meal.

“Sometimes we sleep without any meal, we would be dead by now if it was not because of burning charcoal and sell it, “She said.

Joseph Lokol an elder from Pupu village in Rupa Sub County observed that poverty and the current biting hunger was the main cause of environmental degradation in Karamoja region.

“People have lost all the livestock that they had before due to cattle rustling, they have tried to grow crops but also draught affected it now they have no any other alternative apart from battling ways of eating,” he said.

Last year in October UN Food and Agriculture Organization (FAO) launched a program for massive tree planting with the move to save Karamoja from worse climate change.

Mr. Alhaji M. Jallow FAO Country Representative while launching the tree planting project warned that should people of Karamoja don’t embrace tree planting as a serious project, Karamoja region will become the worst desert in less than 20 years from now due to high rate of tree cutting for charcoal.

“Commercial tree planting in Karamoja will help to reverse climate change effects, increase forest cover in the region, create jobs and boost incomes of those involved in the entire forestry value chain,” he said.

He explain that FAO  could  no longer look at food, livelihoods, and the management of natural resources separately because the sustainable management of both forests and agriculture is essential for ensuring food security and tackling climate change.

Mr. Francis Kiyonga the LCV chairperson of Amudat district speaking to PML daily on Saturday 19th of October in Amudat blamed the current high rate of tree cutting in the region for charcoal burning on poverty adding that most families in Karamoja survive on burning charcoal.

“Most families in Karamoja have no other alternative means of survival, I wish if the government could only look at any suitable means for the survival of our people nobody would wish to go and cut trees for charcoal burning.

He also appealed to government to low the prices of gas to enable people use gas instead of charcoal.

According to Mr. Kiyonga, Charcoal is on high demand countrywide because it’s the only cheapest way people can cook since gas and fuel is very expensive.

Mr. Mark AOL Musoka the former district LCV chairperson Moroto district said office of the prime minister needs to come up with regular supply of food to the people adding that people burn charcoal for survival. 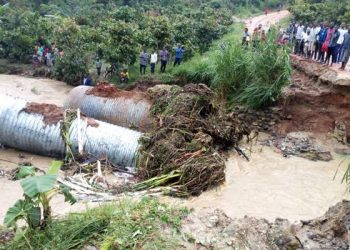