KAMPALA – Tension is simmering at the Uganda Road Fund (URF) after staff petitioned Finance minister Matia Kasaija, accusing the URF Board Chairperson, Ms Merian Sebunya Kyomugisha, of trying to circumvent the recruitment process of a new executive director for the government agency.

In the strongly worded letter dated September 9, 2019, the petitioners claim that whereas the minister had last December stopped the process aimed at replacing Eng. Micheal Odongo, who has been URF ED for close to 10 years, Ms Kyomugisha, with the help of another Board member, Ms Rosemary Owino, have deliberately ignored his orders and gone ahead to advertise the position.

“We the staff of URF are extremely concerned by the behavior of the Board Chairperson, Ms Merian Sebunya Kyomugisha, and the Board Member, Ms Rosemary Owino, in the ongoing gross management of the recruitment process of a new executive Director and hereby seek your urgent intervention to mitigate the abysmal corporate governance,” the letter reads in part.

“Honorable Minister, the URF staff on November 27 wrote to you letter, in which we highlighted to you the abysmal corporate governance failures within the URF Board, emanating from the conduct of the chairperson supported by Ms Owino. You subsequently stopped the chairperson from undertaking any Corporate Governance activities in your letter of December 6, 2018,” the staff adds. 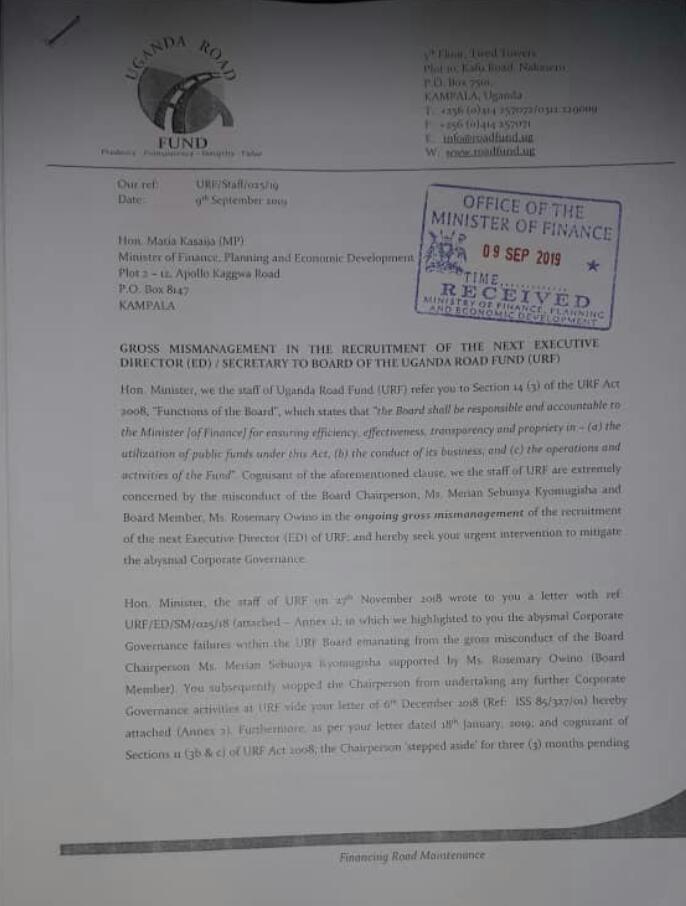 The staff say that whereas the minister previously asked Kyomugisha to keep out of office to enable IGG investigate her previous conduct, when she returned, she started from she had stopped by attempting to use her office to recruit a new executive director.

They claim that Ms Owino personally called the New Vision to pick the advert, advertising the ED job. They say this was very irregular and call on Mr Kasaijja to investigate the motive why Board members would usurp management work. They say the placement of the job advert ideally is a matter of the entity’s procurement unit and wonder why Owino and Sebunya had to act directly themselves.

They accuse Kyomugisha of altering the requirements for the next ED ostensibly to favor some outsiders she allegedly wants to take the job. The staff claim that because it’s a highly technical job, the URF ED must be a registered engineer and not just someone affiliated to any professional body as stipulated in the Kyomugisha advert. They urge Kasaijja to investigate why the requirements for new ED are being diluted like never before.

They are also disputing the 23rd August board meeting which sat and purported to diminish the requirements contrary to what the URF Act and HR manual stipulate. They say the eligibility criterion was 10 years ago arrived at in consultation with the Sector Working Group members who included representation from Finance, Local Government and Works Ministries. The development partners like WB, who fund the sector, equally inputted into the process and are already protesting the manner in which the same has since been diluted.

The URF staff argue that in the last 10 years, the government has been investing a lot of money into the training and skilling of managers at URF as part of succession planning to ensure by the time Eng Odongo leaves, the organization has mentored someone good enough to take over. This, they said, increases understanding of the job and institutional memory, the reason why past EDs have been replaced by their former subordinates at entities like URA, PPDA, NWSC, UMEME, UNBS, UNEB, NARO and CAA.