BUGLOBI – Uganda Communications Commission (UCC) has flagged off a group of seven Ugandan film actors and actresses whose films were nominated in forthcoming Ghana Movie Awards 2019.

The 5th Edition of the Awards is due to take place on 24 August 2019, at the Movinpic Ambassador Hotel in Accra, Ghana.

Golden Movies Awards is an annual award that celebrates outstanding achievement in African television and film on the continent.

Among Ugandan names that will be looking to scoop Awards include Richard Mulindwa the writer  and Director of 94 Terror – was nominated in three categories (Golden Director, Golden Movie of year and Golden indigenous Movie of the year), Ronah Ninsiima (Golden Actress, Golden Discovery Actor, and Golden promising actor) and  Joan Agaba (Golden Supporting actress).

All nominated from 94 Terror one of the popular movies on the continent while Yassin Lubowa was the only one nominated as Golden actor of the year from Extra Time.

Mr. Fred Otunu, the UCC Director for Corporate Affairs who represented the Executive Director, Eng Godfrey Mutabazi dispatched a team of 7 nominees at the commission’s headquarters in Bugolobi and wished them luck.

UCC has been at the fore of supporting the film industry in Uganda through its annual Uganda Film Festival initiative which recognizes outstanding locally produced films.

Speaking at the UCC headquarters in Bugolobi, Mr. Otunu said that the Commission believes that the film industry can significantly transform the country’s economy as has been the case in Nigeria and Ghana.

“The [Film] industry is picking up steadily and its products bring pride to the country,” he said adding that “many years we had issues to do with lighting, sound and so forth but through UFF other than the celebratory event, there is always a training component which has enabled you to get nominated.”

Mr. Otunu added that whereas the Commission is not fully endowed with a lot of resources to support all the needs of the industry, “we share the little we have to boost local talents.”

He said that the country has started to appreciate the fruits of the Uganda Film Festival, an initiative that the UCC started in 2013.

“As the Commission, when we started this journey, seven years ago with the Uganda Film Festival, some critics thought we were wasting money…those are the people who are short-sighted not knowing that for us we were building capacity,” said maintaining that: “We are happy as a Commission that the products of UFF are being recognized not only at the regional and continental levels but on the international the scene now.”

“Whatever you come back with, we shall celebrate it,” he said.

Each of the 7 individuals traveling to Ghana was handed USD 200 by UCC as a token of appreciation.

Mr. Otunu said more is yet to come.

A number of Ugandan films have also been showcased at major film festivals in France, Germany, and the USA among others.

Last year, UCC sponsored and dispatched off a team of 12 nominees to the Africa Magic Viewers’ Choice Awards (AMVCA) in capital Lagos, Nigeria.

Ms. Ronah Ninsiima who spoke on behalf of 94 Terror crew said the movie that dominated the Ghana Movie Awards with 18 nominations.

Speaking briefly about the movie where she featured as Keza, a survivor of the Tutsi and Hutu the slaughter that happened in the 1994 Rwanda genocide.

Keza tells the struggle and loss of her beloved family that she went through until the river Kagera that enabled her to cross to Uganda.

A brief storyline of the highly watched movie says that after the assassination of Rwandan President, Juvenal Habyarimana, the Hutus condemned the Tutsis and invaded their homesteads killing whoever looked Tutsi.

Keza’s the family was murdered in her sight but she narrowly escaped with the help of her mates; Shema a Hutu, Mutesi a Tutsi and the rest, together they have to sneak through the risky bushes to make it out of Rwanda alive.

She thanked UCC for the supported, it has rendered to the industry.

“Uganda Film Festival has had a great hand in our movies in a way that filmmakers now want to produce very good movies due to competition and training,” she said. 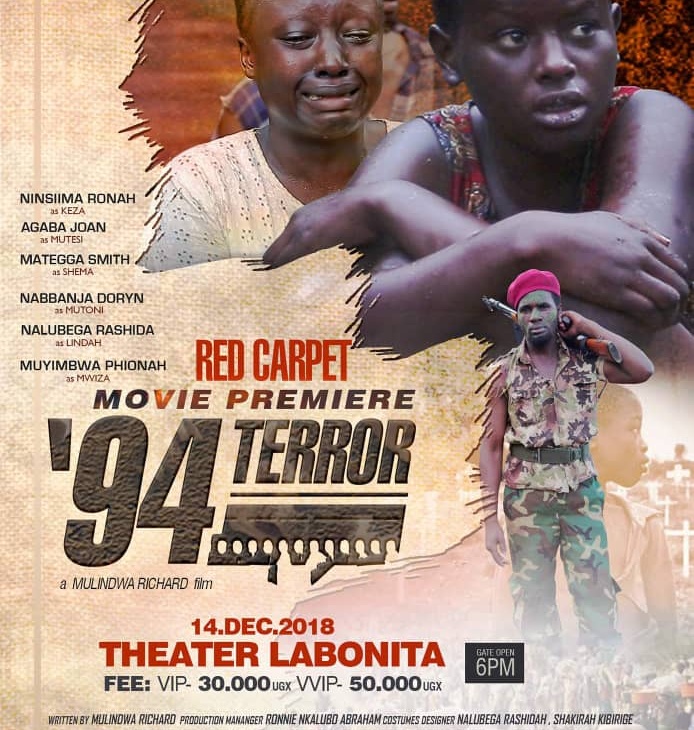 94 Terror was very well received and immediately won Best Viewers’ Choice Movie Award at the 2018 Uganda Film Festival Awards in the first week after the release.

It went on to win the Best Costume award at The African Film Festival (TAFF) in Dallas Texas in 2019. It also led nominations at the 2019 Golden Movie Awards Africa (GMAA) in Ghana with 18 nominations including Best Movie Drama and Best Screenplay.

The film received a double selection at both the Straight Jacket Guerrilla Festival in Mexico and the FICMEC Nador International Festival of Common Memory in France.

It was produced at LIMIT Production, a media production company run by Richard Mulindwa himself.

Filming for most of the film took place in Kasensero, Rakai District, Uganda.