UCC intervenes on access, usage of ICTs by PWDs after baseline study

GULU – The Uganda Communications Commission (UCC) has conducted its first regional workshop on increasing navigability and effectiveness of education of people with special needs through assistive technologies.

The workshop is among the strategies laid down by the commission to facilitate the removal of barriers to ICT access and support the role that ICTs can play in enabling persons with disabilities to participate fully and equally in the Ugandan society.

The Commission in 2018 undertook a baseline study on access and usage of information and communication technologies by PWDs in Uganda, to establish the current access and usage patterns of ICTs including the challenges faces.

“Above all, people were very grateful for that initiative, because people with disabilities were represented physically and the outcomes were promising,” RCDF director Hon Nyombi Tembo, said adding that “the major objective of the RCDF is to reach out to areas and people who are unserved and unserved.”

He said government is committed to helping people with disabilities and that; “As UCC, we take the issues affecting you specifically in the ream of ICTs very serious.”

“RCDF activities in every part of the country however small they are, the have yielded multiplier effects, Hon. Nyombi said asking people with disabilities to reveal how best they think they can be served to benefit from the many technologies.

Mr. Simon Bugaba, the head of UCC regional offices revealed that RCDF in collaboration with the strategy and research consulted stakeholders including National Union of People With Disabilities (NUDIP) and Oyster and Pearl on how best UCC can address the ICT challenges mentioned in the study.

“They all, told us of was critical to hold sensitisation workshop for PSN communities, leaders and the rest of the population to help arrest the situation especially on education by increasing awareness on Assertive Technologies,” Mr. Bugaba said.

He said while there have been great advances in the development of specialized assistive technology, such as microprocessor-controlled prosthetics or digital hearing aids, more general-purpose technologies, such as ordinary computers, tablets and smartphones, offer significant opportunities for broader social and economic inclusion of persons with disabilities, they have remained inaccessible to PWDs.

Mr. Bugaba said the workshop anticipated to build awareness, expand digital literacy, finance the acquisition of devices and software, and provide technical support for the use of ICTs among the disabled.

The Gulu RDC, Mr Okoth Lapolo, lauded the partnership between UCC and Oyster and Pearls in helping the people with disabilities.

He reminded them that disabled is not inability and that government is working to fulfill the saying.

In terms of representation, he said that government has ensured that people with disabilities are well represented at all levels including in Parliament.

He urged them to task their leaders to remind government of their needs especially in terms of ICT for education and business.

“Government is saying don’t lose hope, we have and we are still creating hope and opportunities for everyone, ” he said.

RDC Lapolo tasked UCC to come up with solutions to blind-deaf and for people with disabilities in pre-primary level with appropriate technologies.

Mr. Bugabe reiterated position to continuously promote research into the development and use of new communications techniques and technologies, including those which promote accessibility by persons with disability.

He said UCC is working on modalities to bring technology of sense and smell to those who are blind-deaf.

Denis Komakech, a blind man, but a computer trainer from Oyster and Pearls brief participants on the range of assistive devices that can be deployed to cultivate effective and accessible education for learners with disabilities.

Speaking to media after the training, the blind computer trainer said the workshop was important because it helped stakeholders to understand the role of ICTs in inclusion and forging interdependence between learners with disabilities and their counterparts without disabilities.

She said her school has only two computers and that they lack software for blind pupils.

Rev. Sr. Akot Adong asked UCC/RCDF to support her school with at least five more computers and appropriate software to boost the academic performance of her pupils which she said is worrying.

Many were excited by UCC’s training. 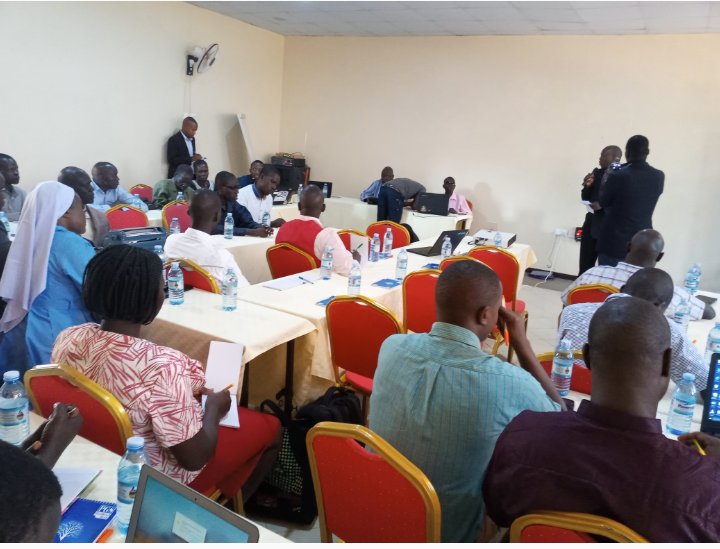 They said the skills from the workshop will help them to cater for the pupils with disabilities in their respective schools.

The regional workshops will be continuously conducted in all regions including Soroti for the Eastern region’s benefit and Mbarara to cater for the Western Region.